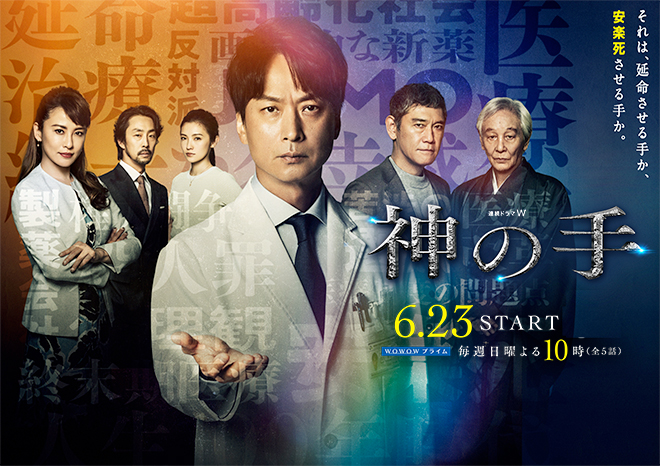 Story
21-year-old Furubayashi Shotaro comes to the skilled surgeon Shirakawa Yasuo for an examination. He is diagnosed with cancer of the anus and discharged from hospital after surgery. However, he finds out that the cancer has spread several months later. As the cancer gets progressively worse, it causes unbearable pain. There is no hope that he will recover. Shotaro’s aunt Akiko, who has been nursing him, is also emotionally drained and pleads with Shirakawa to administer euthanasia. Shirakawa rejects this and tries every possible means to treat Shotaro. But there is nothing that can be done. He eventually makes the agonising decision to euthanise the young man. However, when Shotaro’s mother Yasuyo, who is a journalist, learns about her son’s death, she brings a charge against Shirakawa. Was Shirakawa’s actions murder or manslaughter? While this becomes the talk of the town for consecutive days, it makes the legalisation of euthanasia, which had already been debated, seem very real. Behind the scene are groups seeking to pass a bill legalising euthanasia and drastic medical reforms, doctors opposed to mercy killing and Yasuyo who plans to make use of the mass media to block the bill. Shirakawa soon gets engulfed this torrent.

Characters
Shiina Kippei as Shirakawa Yasuo
The head of the Department of Surgery at Musashino General Medical Centre. A gastroenterologist with great skills. His patients have strong faith in him. He makes the agonising decision to administer euthanasia for his 21-year-old patient Furubayashi Shotaro.

Sugimoto Tetta as Yamana Keisuke
A doctor with the Department of Surgery at Musashino General Medical Centre. A plastic surgeon who is Shirakawa Yasuo’s colleague. He is unhappy with the current medical system and joins Jamo.

Suzuki Sawa as Furubayashi Yasuyo
Furubayashi Shotaro’s mother. A journalist who has influence on the media. She brings a charge against Shirakawa Yasuo for Shotaro’s euthanasia.

Kitamura Yukiya as Niimi Sadakazu
The chairman of Jamo and a heart surgeon. He set up Jamo with the objective of reforming the health service and takes in doctors including Yamana Keisuke.

Hoshino Mari as Motomura Yukie
A nurse who works for Yokohama Nanbu Municipal Hospital. She used to worked under Shirakawa Yasuo and understands him well. She gives an anguished Shirakawa advice.

Ashina Sei as Shibaki Kaori
The deputy chairman of Jamo. A freelance anaesthetist. She assists chairman Niimi Sadakazu at Jamo and becomes his right-hand person.

Hayama Shono as Furubayashi Shotaro
A patient with terminal cancer. He has cancer of the anus and dies at the young age of 21.

Inoue Hajime as Otsuka Akihiko
A doctor at Tokyo Mitabashi Hospital. He sets up a group called Soshiren to oppose legalising euthanasia.

Kondo Masaomi as Sadohara Kazuma
A former prime minister. He remains an powerful figure even though he has retired from politics. He is the person responsible for Jamo, a group that champions euthanasia.

Original Work
Kami no Te by Kusakabe Yo

This blog contains information and musings on current and upcoming Japanese dramas but is not intended to be comprehensive.
View all posts by jadefrost →
This entry was posted in Summer 2019 Dramas, WOWOW and tagged Kami no Te, Kitamura Yukiya, Kondo Masaomi, Sakai Maki, Shiina Kippei, Suzuki Sawa. Bookmark the permalink.