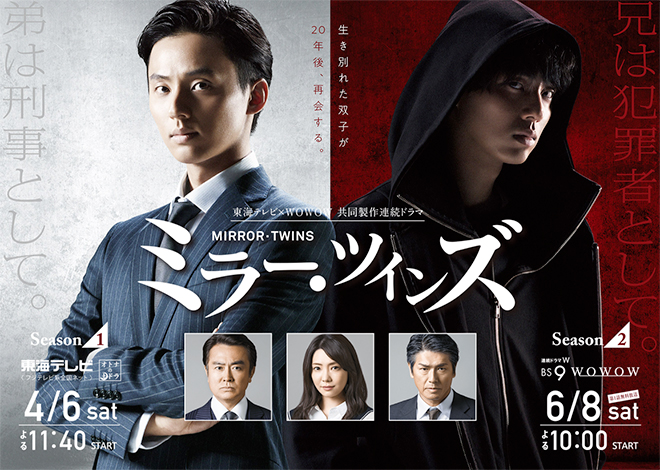 Story
The acts of revenge are believed to have ended with the suicide of Katsuragi Yugo, the older twin brother Keigo, a detective with the Tokyo Metropolitan Police Department’s First Investigation Division. However, one year later, Jinnai Gen, a former management consultant who was arrested for mediating in a bribe from a major construction company to the Ministry of Land, Infrastructure, Transport and Tourism in a bid-rigging case, is murdered by someone after his release. Keigo and Minagawa Kosaku from Midorisaka Police Precinct investigate this case. Meanwhile, the grandson of Kobayakawa Shotaro, a lawmaker of the Lower House, is kidnapped. Kobayakawa is rumoured to be the next leader of his party and this comes just as he was receiving numerous threats of death. Keigo is designated to negotiate with the kidnapper who demands that the he bring the same amount of ransom money in the same way to the same place for the handover as when Yugo was abducted 21 years ago. Keigo is convinced that this is a copycat criminal. There appears to be no connection between these two cases but the truth is hidden from sight.

Characters
Fujigaya Taisuke as Katsuragi Keigo/Yugo
Katsuragi Keigo: A detective with the Tokyo Metropolitan Police Department’s First Investigative Division. He is a serious and stoic man who puts his career first. He became a detective in order to reveal the truth of the kidnapping case involving his older brother Yugo 21 years ago. While investigating the murder of a former management consultant Jinnai Gen one year after Yugo committed suicide, he is made the negotiator in a copycat kidnapping case.

Katsuragi Yugo: Katsuragi Keigo’s older twin brother. The victim of a kidnapping case that happened 21 years ago. After taking revenge on all the people who ruined his life, he is believed to have shouldered all the crimes and committed suicide… …

Kurashina Kana as Yoshizaki Eiri
Katsuragi Yugo’s ex-girlfriend and collaborator. She does not know her biological parents and got through life only believing in him. Yugo had saved her from abuse as a child and they were always together after that. She had initiated contact with his younger twin, Keigo, in order to help with his revenge. Because Yugo means everything to her, she cannot accept his suicide. One year later, she meets Keigo again. He informs her about her birth mother and she wavers over whether she should meet her.

Watanabe Dai as Akagi Katsuhiko
A detective with the Tokyo Metropolitan Police Department’s First Investigative Division. He sees Katsuragi Keigo as his rival but afterp the spate of cases, he now trusts Keigo as a like-minded police officer. Because he started out as an inspector, he is the type of rigid bureaucrat who is proud of his profession. He is the officer in charge of investigating the kidnapping of Kobayakawa Shoji’s son.

Satoi Kenta as Katsuragi Eiichi
The father of Katsuragi Keigo and Yugo. He died in a freak accident while driving right after he appeared on a television programme one year ago to call for information on Yugo, who has been missing ever since he was kidnapped, and offer 100 million yen of his own personal wealth as a reward. When he was alive, he had served as the chairman of Kobayakawa Shotaro’s supporters’ association. He learnt that Minagawa Kosaku is the biological father of his twins in the wake of Yugo’s kidnapping, and has complete faith in him.

Takahashi Katsunori as Minagawa Kosaku
A detective of Midorisaka Police Precinct. Rank: Assistant Inspector. The biological father of Katsuragi Keigo and Yugo. He was in charge of Yugo’s kidnapping case 20 years ago. However, case remained unsolved when it reached the statue of limitation. He believes it was Yugo’s desire for revenge against the criminals that saved him in the years since the kidnapping case, and has been assisting Yugo from a young age. This causes him and Keigo to grow apart when Keigo learns about all of this. Meanwhile, he secretly pursues a case … …

Nakamura Shunsuke as Kobayakawa Shoji
A lawmaker of the Lower House and a member of the political party, Sominto. Kobayakawa Shotaro‘s son. Before he became a lawmaker, he served as his father’s secretary. He constantly puts the Kobayakawa family’s well-being first.

Furuya Ikkou as Kobayakawa Shotaro
A lawmaker of the Lower House and a member of the political party, Sominto. He has held the portfolios of Minister of Education, Culture, Sports, Science and Technology as well as Minister of Land, Infrastructure, Transport and Tourism, and is regarded as the next leader. Because of that, he has received death threats and is searching for full-time security. Meanwhile, his grandson Naoto is kidnapped. He has faith in Katsuragi Keigo who is investigating the case. He has a past which he cannot forget.

Miyazaki Yoshiko as Asuma Kotono
The proprietress of Asuma Ryokan. The older sister of Yoshizaki Eiri’s birth mother Asuma Ayano. She meets her niece, Eiri, for the first time and generously accepts her.

This blog contains information and musings on current and upcoming Japanese dramas but is not intended to be comprehensive.
View all posts by jadefrost →
This entry was posted in Spring 2019 Dramas, WOWOW and tagged Furuya Ikkou, Kurashina Kana, Mirror Twins Series, Takahashi Katsunori. Bookmark the permalink.