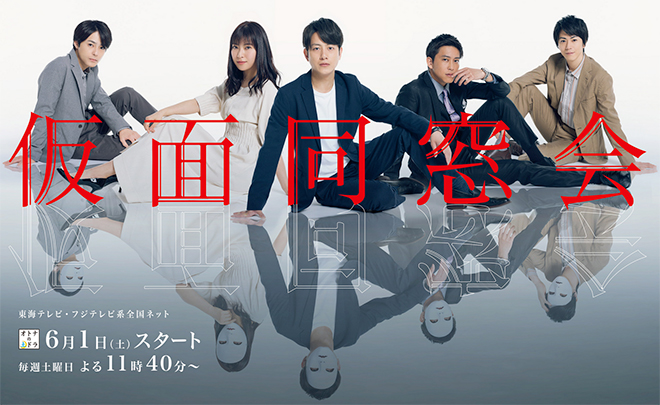 Story
Shintani Yosuke is a salesman for housing equipment. After graduating from high school, he left his hometown. There are two reasons for this. He wanted to run away from the dreadful memories of his older brother who died in an accident 18 years old and the corporal punishment he and his high school classmates were subjected to by an abominable teacher who cast a shadow over his life in his youth. However, Yosuke returns to the very hometown he had fled as if he were running away from his past due to a personnel transfer after he made a mistake at work. On his way home one day, he saves a woman who is being pursued by a stalker. This woman is Takenaka Misato, an ex-classmate whom he adored back in high school. Yosuke is pleased to meet her again by chance and Misato invites him to an upcoming high school reunion. Although Yosuke wants to run away from the past, the encounter with Misato puts him in good spirits. He attends the reunion and meets Minagawa Kiichi, Omi Kazuyasu and Kataoka Yamato, the childhood friends he used to hang around with. He had avoided seeing them after he left their hometown, but is immediately transported back to high school days from the moment they reunited. That detestable disciplinary teacher Kashimura Sadashige is also there. The sight of his face brings back the trauma of the past. After the high school reunion ends, Kiichi makes a shocking suggestion to Yosuke, Kazuyasu and Yamato. He proposes that they kidnap and punish Kashimura, and It is a prank to get their revenge on Kashimura who controlled students with brute force. They kidnap Kashimura, and leave him at a disused factory to scare him. Yosuke shows reluctance to go along with this childish plan but gets carried away by the mood of the others and persuaded to “settle the past”. But the next day, Kashimura is found death at some other place. Did one of the four of them return to the crime scene and kill him? Everyone denies this but they are filled with doubts and fears. This case will cause their beliefs to crumble.

Characters
Mizobata Junpei as Shintani Yosuke
A salesman who works for a housing equipment company. He feels a sense of guilt towards his older brother Masayuki who died in an accident 18 years ago. After graduating from Koriyama High School, he left his hometown but is made to return due to a personnel transfer. He is invited to a high school reunion by a former classmate Takenaka Misato whom he happened to meet, and is reunited with Minagawa Kiichi, Omi Kazuyasu and Kataoka Yamato when he attends. He participates in their plan to get revenge on their former disciplinary teacher Kashimura Sadashige without thinking anything about it. However, he gets caught up in an unexpected situation.

Takimoto Miori as Takenaka Misato
A graduate of Koriyama High School. She was in the same class as Shintani Yosuke, Minagawa Kiichi, Omi Kazuyasu and Kataoka Yamato in the third year. At that time, she was Yosuke’s dream girl because she was beautiful in addition to her good grades. She now works at the front desk of the local general hospital. She is saved by Shintani Yosuke while she was being followed by a stalker and this brings her closer to Yosuke.

Sano Gaku as Minagawa Kiichi
Shintani Yosuke’s childhood friend. He was pampered by his father as he grew up and became a person who always has to have his way and has no consideration for others. He now runs the property company that he inherited from his father. He plots a masked reunion to take out his anger at having been marked as a troublemaker by Kashimura Sadashige back in high school.

Kimura Ryo as Omi Kazuyasu
Shintani Yosuke’s childhood friend. He collapsed from heatstroke back in high school because of Kashimura Sadashige and that left him with a right leg that is still numb to this day. He has led a bleak life because of this and hates Kashimura. He is subservient and timid, and still lowly like the poop from Minagawa Kiichi’s goldfish even now.

Hirose Tomoki as Kataoka Yamato
Shintani Yosuke’s childhood friend. A calm and serious guy, he is now a university staff and gives advice to university students at the student affairs office. He had been dating the school beauty Hibino Mari but she jumped to her death after graduation. He is the person whom Yosuke is able to open up to the most among the three.

Hinagata Akiko as Uehara Kanako
An art teacher at Koriyama High School. A beauty whom the students idolise. She is actually obsessed with money and does dishonest things such as inflating teaching material fees because she is in debt for buying up branded goods. Besides having an affair with Kashimura Sadashige, she also gets close to the wealthy Minagawa Kiichi and this develops into a sexual relationship.

Nagai Masaru as Stalker
A mysterious man who is stalking Takenaka Misato. He also gets close to Shintani Yosuke who saved Misato.

Watanabe Hiroyuki as Kashimura Sadashige
Koriyama High School’s former disciplinary teacher who was also in charge of non-curricular educational guidance. He has antiquated views of education, believing that teachers who put down students with overwhelming force and compel them to walk the right path are doing the right thing. He was especially strict with male students. He is now a key person on the school’s board.

This blog contains information and musings on current and upcoming Japanese dramas but is not intended to be comprehensive.
View all posts by jadefrost →
This entry was posted in Fuji TV, Spring 2019 Dramas and tagged Kamen Dosokai, Mizobata Junpei, Takimoto Miori. Bookmark the permalink.