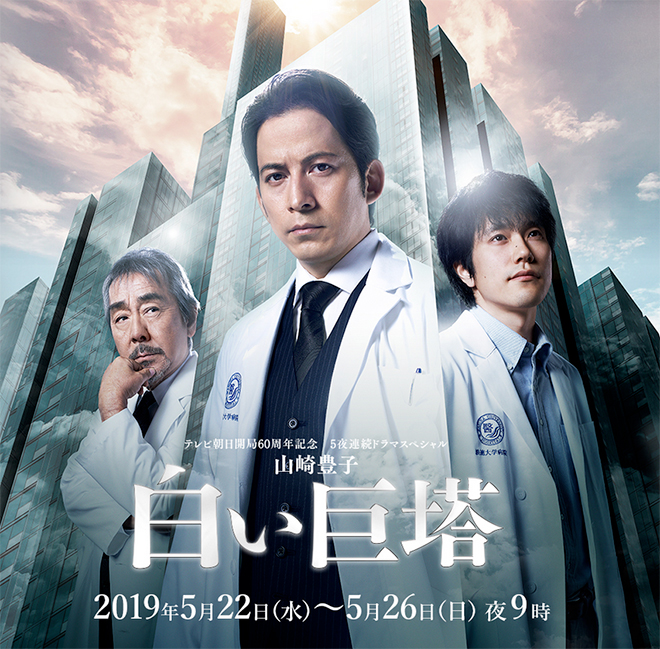 Date: From 9.00 p.m., 22 – 26 May 2019
Scriptwriter: Habara Daisuke (Spiral, Showa Genroku Rakugo Shinjuu, Godan)
Original Work: Shiroi Kyoto by Yamazaki Toyoko
Cast: Okada Junichi, Matsuyama Kenichi, Sawajiri Erika, Terao Akira, Matsushige Yutaka, Kishibe Ittoku, Mitsushima Shinnosuke, Yashima Norito, Mimura Rie, Ichikawa Mikako, Kobayashi Kaoru, Kaho, Ichige Yoshie, Takashima Reiko, Iitoyo Marie, Shiina Kippei, Yanagiba Toshiro, Kishimoto Kayoko, Mukai Koji, Saito Takumi, Yamazaki Ikusaburo
Synopsis: Zaizen Goro (Okada Junichi) of the First Department of Surgery at Naniwa University’s Faculty of Medicine is well-known in the medical community as a specialist in laparoscopic surgery. A man with a friendly personality, he is the university’s star associate professor – idolised by students at the affiliated university and by his colleagues. One night, the condition of a special patient Yamada Otoichi, the Chairman of Kinki Shimbun, changes all of a sudden during a party to celebrate the 77th birthday of Naniwa University’s Professor Emeritus Takimura Kyosuke (Kobayashi Nenji). Yamada who is suffering from pancreatic cancer, designates Zaizen to be his operating surgeon. Yamada was originally the special patient of Zaizen’s boss Professor Azuma Teizo (Terao Akira). Zaizen appears to hesitate about going over Professor Azuma’s head to perform the surgery. But in his heart, he gloats over this opportunity that dropped in unexpectedly. The surgery is a success and Zaizen is given fine wine and several million in cash by Yamada. Although Professor Azuma feigns nonchalance over having his own special patient saved by Zaizen, he is bitter about it. Meanwhile, the elections for a professor at Naniwa University’s Faculty of Medicine is drawing near given Professor Azuma’s impending retirement. He murmurs to a patronising Zaizen that he intends to recommend him to be the next professor. But in truth, he privately starts to think of someone who is not Zaizen. At this point, Zaizen’s peer Associate Professor Satomi Shuji (Matsuyama Kenichi) of the First Department of Surgery, is shown the medical records of a patient who has had a relapse of stomach cancer. Zaizen’s diagnosis is that the primary lesion is the pancreas and not the stomach. He points out that the relapse is a misdiagnosis. But once he learns that this was made by Ugai Yuji (Matsushige Yutaka), the dean of Naniwa University’s Faculty of Medicine, he changes his mind. Satomi criticises Zaizen for trying to avoid opposing their higher-ups in preparation for the election. Before long, Professor Azuma fields someone other than Zaizen as a candidate to be professor. Zaizen makes maximum use of the financial and political clout of his father-in-law Zaizen Mataichi (Kobayashi Kaoru) and starts work to fulfil his long-cherished wish to become the professor of the First Department of Surgery at Naniwa University’s Faculty of Medicine. There are unforeseen developments in an election swirling with desires and cruel fate later makes sport of Zaizen.
Official Website: www.tv-asahi.co.jp/shiroikyotou