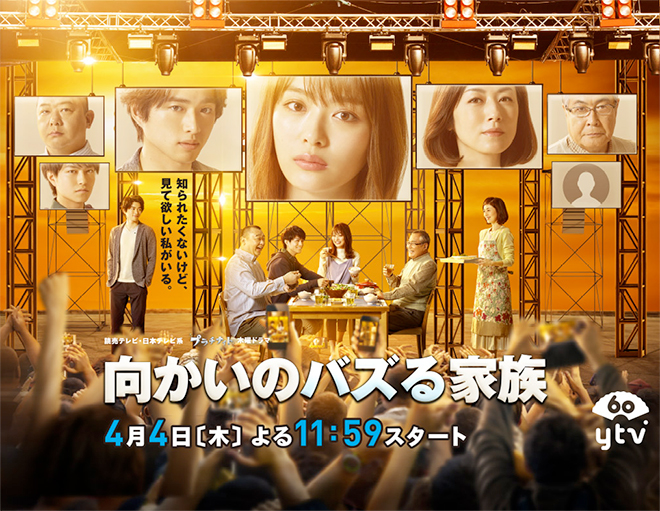 Story
Kagari Akari, the manager at a cafe called Corona, comes from an ordinary family. Her mother Hinako is a full-time housewife, her father Atsushi is a drama producer while her younger brother Makito is a student hunting for a job. An earnest young lady, she plays the good child who conforms to the expectations of the people around her. However, she truly has no interest in her family and knows nothing about them. Until one day … … On the way to work, an insolent salaryman jumps the queue for the train Akari is trying to board but she simply smiles. At the cafe, a regular customer, Minato Ryota, comes when it opens for business. He is Akari’s crush. She is nervous but excited as she serves him. Then an angry voice rings out. A middle-aged man yells at her staff Morita Momo for giving him the slight. Akari sincerely apologises to him in a firm manner as the manager of the cafe, while Ryota watches on with concern. With the rest of the customers staring at them, the man feels awkward and hurriedly leaves the cafe. On the way home, Akari heads somewhere on her own. She takes out a black bag from a coin locker and enters a karaoke box. Placing a smartphone on a stand in front of her, Akari vents her feelings as she hides behind a demon-like mask of a namahage. This is Akari’s other side, one that she keeps a secret from her family, friends and even colleagues. When she gets home, her grandfather Kiyoshi has come over. The whole family sits round the dining table with smiles. But these smiles disappear once the get together is over and he goes back. They are playing a happy family in front of Kiyoshi and trying hard to avoid upsetting him. In truth, no one cares about the family. While Akari is relaxing in the living room, her brother suddenly calls her over. Some customer had recorded and posted a video of the man who complained earlier in the day, and this video has gone viral. The comments are not about Akari or the cafe, but abusive comments directed at the man. In the bedroom, Hinako watches her own cooking video on a tablet. There are many comments as usual. However, the comments are not about the food. The next morning, when Akari gets to work, there is a queue outside which is unusual for the cafe. She later discovers from Momo that the video Makito showed her yesterday was re-edited to focus on her, and has been trending. Customers crowd into the cafe to see Akari and even take pictures with her. She has become a popular person overnight. Akari finds herself elevated to an influencer which upends her family’s quiet life.

Characters
Uchida Rio as Kagari Akari
The manager of a cafe. The eldest child of the Kagaris. She is cheerful and affable but secretly has another side to her. She becomes an influencer when a video goes viral.

Takaoka Saki as Kagari Hinako
Kagari Akari’s mother. She started posting cooking videos on YouTube after she was done with raising her children.

Kinoshita Takayuki as Kagari Atsushi
Kagari Akari’s father. A producer at a TV production company. He does not use social media and does not care about the opinions of netizens.

Ono Takehiko as Kagari Kiyoshi
Kagari Akari’s grandfather. He lives near the Kagaris and is the only person whom Akari can open her heart to. It is a family rule that when he comes to the house, everyone has to sit around the dining table.

Shirasu Jin as Minato Ryota
A regular customer at the cafe Corona. Kagari Akari has a crush on him. He works at a sports gym and dreams of having his own gym in the future. He has a prejudice against people who post anonymously on social media.

This blog contains information and musings on current and upcoming Japanese dramas but is not intended to be comprehensive.
View all posts by jadefrost →
This entry was posted in NTV, Spring 2019 Dramas and tagged Mukai no Bazuru Kazoku, Takaoka Saki. Bookmark the permalink.