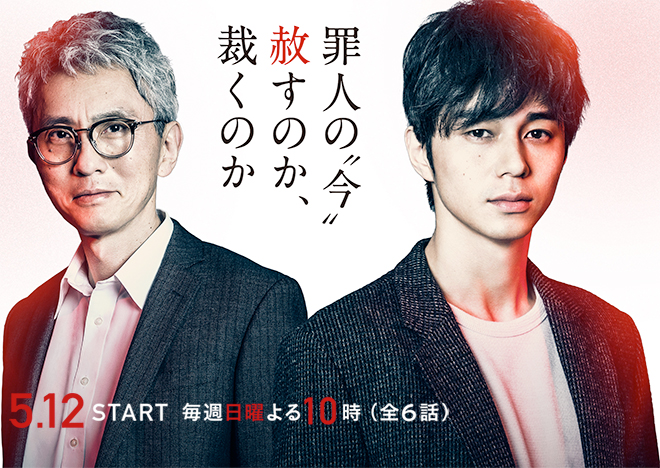 Story
Saiki Shuichi is a former detective who now works for an investigation agency. One day, a couple called the Hosoyas asks him to track Sakagami Yoichi, the man who killed their son and has reintegrated with society after leaving a juvenile correctional institution. Saiki begins investigating on the orders of agency chief, Kogure Masato. But he personally lives with the desire for revenge as his older sister Yukari was murdered in his childhood. As the investigation progresses, Saiki finds out that Sakagami has turned to crime again and is involved in a bank transfer scam. After careful deliberation of the couple’s feelings as the victim’s family, Saiki reports on his investigation. The couple make another request, asking him to find materials that will form the basis for deciding whether Sakagami should be absolved. So Saiki reaches out to Sakagami and tells the Hosoyas his conclusion. Even after that, he continues follow-up investigations on perpetrators of crimes and their circumstances since then are revealed through these findings. Then with the help of a hostess called Haruka, Saiki gets to the villainous trio – Enoki Kazuya, Terada Masashi and Tadokoro Kenji – who drove his sister to her death years ago. What final action will Saiki take?

Characters
Higashide Masahiro as Saiki Shuichi
A former police officer who is now an investigator at the investigation agency called Hope. His older sister Yukari was murdered after she was raped when he was a child. He tackles all sorts of requests as an investigator as he searches for the whereabouts of the three men who killed Yukari.

Matsushige Yutaka as Kogure Masato
The head of the detective agency, Hope. He is the man who pulled Saiki Shuichi into the world of investigators after Saiki was dismissed as a police officer. He has an easygoing personality and cannot get enough of money and sweet things.

Itaya Yuka as Sometani Kumiko
A clerk who works with Saiki Shuichi and Kogure Masato at the investigation agency. Her pet phrase is “I don’t know” which she says with feigned indifference.

Shinkawa Yua as Haruka
A hostess whom Tadokoro Kenji, one of Saiki Yukari’s murderers, is enamoured with. She meets Saiki Shuichi when he comes to investigate Tadokoro and soon helps with his investigation.

Aoyagi Sho as Sakagami Yoichi
The leader of a group of fraudsters. He is the target of Saiki Shuichi’s investigation and was once served a sentence for violence that cause the death of Hosoya Hirobumi’s son.

Emoto Tokio as Suzumoto Shigeki
A lawyer who has a good track record in criminal cases involving juvenile, and becomes one of the investigation agency’s clients. He wants to know if the youth he once defended in these cases have reformed. He was also in charge of the defence in Saiki Yukari’s case.

Miura Masaki as Tadokoro Kenji
One of Saiki Yukari’s murderers. He has been running a ramen shop after reintegrating into society.

Masuoka Toru as Saiki Toshio
Saiki Shuichi’s father. He runs a barber shop and watches over his son who wavers between forgiveness and vengeance.

Oshima Hako as Saiki Naoko
Saiki Shuichi’s mother. She has built an emotional wall ever since Yukari’s case.

This blog contains information and musings on current and upcoming Japanese dramas but is not intended to be comprehensive.
View all posts by jadefrost →
This entry was posted in Spring 2019 Dramas, WOWOW and tagged Akuto, Emoto Tokio, Higashide Masahiro, Itaya Yuka, Masuoka Toru, Matsushige Yutaka, Renbutsu Misako, Yamaguchi Sayaka. Bookmark the permalink.