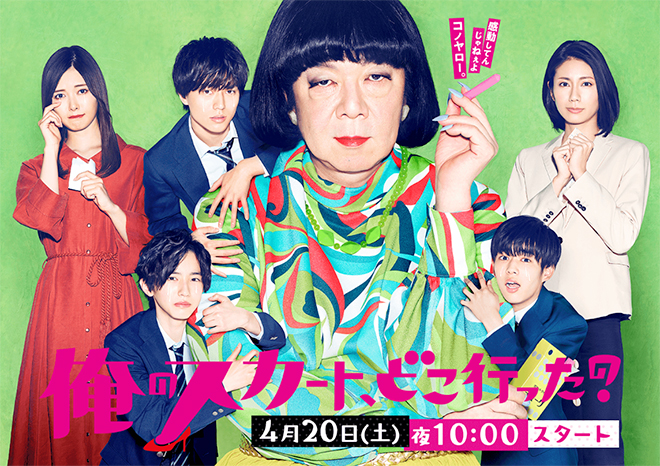 Story
Gorinkan Academy’s Class 2/3 is due to have a new form teacher in the new school term. The students including Akechi Shuhei and Tojo Masayoshi, are gossiping what kind of teacher will come. At the private high school’s opening ceremony for the school term, the new form teacher is introduced but the person is question fails to show up. Just as the students are becoming restless, a cross-dressing middle-aged man in a skirt comes to the stage. This man is Class 2/3’s new form teacher, Harada Nobuo. Harada is a gay cross-dresser. Gorinkan Academy’s principal has brought in Harada who had worked at a gay bar so that students as well as teachers learn about true diversity. He encourages Harada to do as he pleases. Besides being late from the first day, Harada runs along the corridor and sticks to his own pace. The teachers including mathematics teacher Nagai Ayumi and world history teacher Satomi Moe are deeply troubled. Harada enters Class 2/3’s homeroom with assistant form teacher Tanaka Michiru. When he starts to introduce himself, the students mock him. Tojo asks why he is wearing such disgusting clothes, having decided that it is gross for a man to be in women’s wear. Harada responds and proceeds to explain LGBT. The students revolt against him. Tojo and Akechi plot to make Harada quit. Several days later, Harada happens to see one of his students, Wakabayashi Yuma, eating lunch behind the school building. Wakabayashi has trouble interacting with people and always hides his face with a masek. Harada tries to take the mask from him. After that, Wakabayashi causes a commotion in school. He screams, “I’ll make Harada-sensei resign!” and is about to jump of the school’s rooftop. What will Harada do? Outrageous and daring, Mr. Harada uses every ounce of his courage to fight back against the gigantic establishment and opens up the minds of his students.

Characters
Furuta Arata as Harada Nobuo
A newly appointed Japanese language teacher at Gorinkan Academy who is put in charge of Class 2/3. He is a gay cross-dresser and used to run a gay bar. He lives with his daughter Ito who is like a daughter, mother and wife to him.

Matsushita Nao as Nagai Ayumi
A mathematics teacher at Gorinkan Academy, she is also in charge of life coaching. She was headhunted by the principal five years ago for the mission of raising the deviation value. She constantly clashes with Harada Nobuo due to differences they have over the education policy.

Shiraishi Mai as Satomi Moe
A world history teacher at Gorinkan Academy. A teacher of two years. Although she has joined the profession she admired, what she sees in the classroom is quite different from her ideals.

Kiriyama Ren as Tanaka Michiru
A Japanese history teacher at Gorinkan Academy. The assistant form teacher of Harada Nobuo’s class. He is always put at a disadvantage every day by the wild and wacky Harada. Everything he does is left unfinished. He has a predisposition for getting caught up in situations.

Ito Seiko as Terao Tetta
The principal of Gorinkan Academy which has announced their diversity policy. He is famous in education circles and admired by educators across Japan. He has expectations of Harada Nobuo but … …

Nagase Ren as Akechi Shuhei
A second-year student of Gorinkan Academy. He is the commanding leader of Class 2/3 and takes a confrontational attitude towards Harada Nobuo.

Michieda Shunsuke as Tojo Masayoshi
A second-year student of Gorinkan Academy. He is a central figure in class, but he has mixed feelings.

Nagao Kento as Wakabayashi Yuma
A second-year student of Gorinkan Academy. Unlike Akechi Shuhei and Tojo Masayoshi, he quietly lingers around at the back of the classroom.

This blog contains information and musings on current and upcoming Japanese dramas but is not intended to be comprehensive.
View all posts by jadefrost →
This entry was posted in Spring 2019 Dramas and tagged Furuta Arata, Matsushita Nao, Ore no Sukato Doko Itta?. Bookmark the permalink.