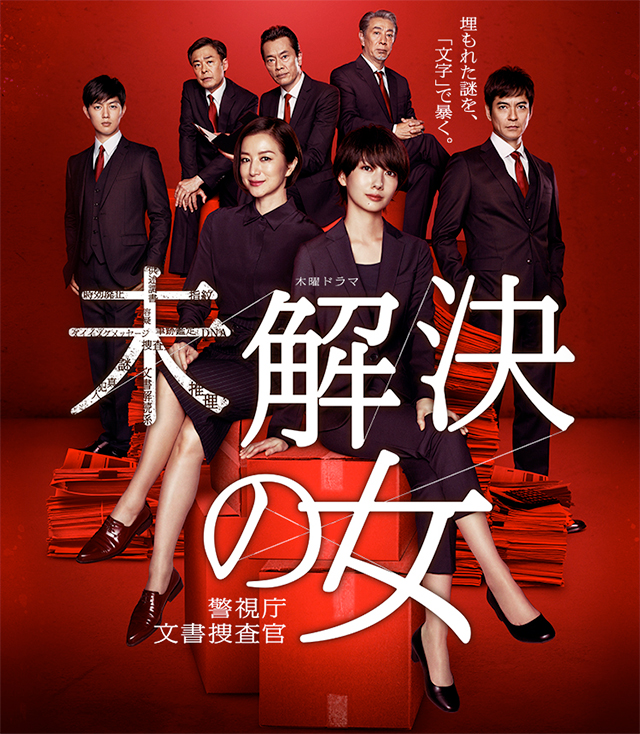 Date: From 9.00 p.m., 28 April 2019
Scriptwriter: Omori Mika (Mikaiketsu no Onna, Kono Koe o Kimi ni, Asa ga Kita Series)
Original Work: Hiiro no Signal Keishichou Bunsho Sousakan Episode Zero by Asami Kazushi
Cast: Haru, Sawamura Ikki, Kudo Asuka, Takada Junji, Mitsuishi Ken, Endo Kenichi, Suzuki Kyoka, Tanihara Shosuke (guest star), Takeda Shinji (guest star), Nakamura Shunsuke (guest star)
Synopsis: Detective Yashiro Tomo (Haru), who belongs to the Tokyo Metropolitan Police Department’s Sixth Special Investigations Unit, visits the Kyoto Prefectural Police along with senior detectives Narumi Risa (Suzuki Kyoka) and Kusaka Shinji (Endo Kenichi). Three days earlier, Takemura Yusuke (Kaai Gamon), a cafe owner in Kyoto City, was found dead. He had three of the same kanji characters for “man” in a row and in red ink on his body. Strangely enough, two people in the IT industry were killed one after the other in the Tokyo metropolitan area five years ago. The characters “bug” and “item” were also left behind in red ink at the respective crime scenes but both cases were never solved. This strange but common point between the cases draws the attention of Tomo and Risa. They speculate that the latest crime was committed by the same criminal after a five-year gap. However, they are brushed aside by their boss Koga Kiyonari (Sawamura Ikki), who heads the unit, for twisting facts. Kunikida Tetsuo (Tanihara Shosuke), a detective of the Kyoto Prefectural Police’s First Investigative Division, shows skepticism towards investigation. Even so, Tomo and Risa are not discouraged and try to find out the missing piece that connects the three cases. However, they do not discover a connection between the victims and are unable to make the desired progress in the investigation. Then Kunikida obtains information that Takemura had worked at WTechnos, Tokyo’s largest software company until four or five years ago, after taking a fresh look at his past. In addition, it turns out that Takemura had met Wakui Toru (Nakamura Shunsuke), the CEO of WTechnos, two days before he was killed. Tomo and Kunikida head to WTechnos in search of other clues. However, they are turned away by the CEO’s secretary Komesu Masato (Takeda Shinji). Meanwhile, another murder occurs in Tokyo. Risa takes a look at the character in red ink that was left behind at the crime scene and the look in her eyes suddenly change … …
Official Website: www.tv-asahi.co.jp/mikaiketsu

This blog contains information and musings on current and upcoming Japanese dramas but is not intended to be comprehensive.
View all posts by jadefrost →
This entry was posted in Spring 2019 Drama Specials, TV Asahi and tagged Endo Kenichi, Haru, Mikaiketsu no Onna Series, Mitsuishi Ken, Sawamura Ikki, Suzuki Kyoka, Tanihara Shosuke. Bookmark the permalink.