Saka no Tochuu no Ie 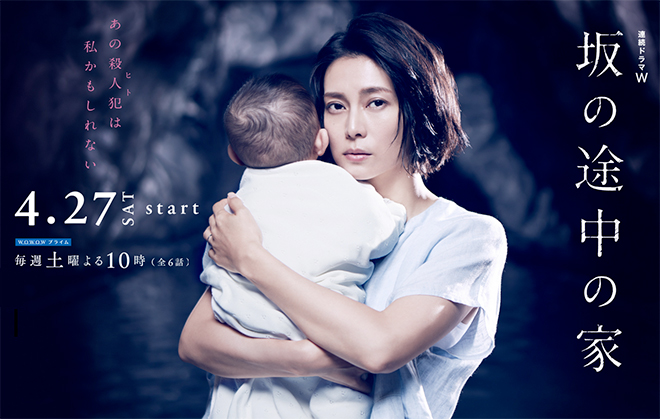 Story
Yamazaki Risako leads a peaceful life with her husband Yoichiro and their 3-year-old daughter Fumika. One day, she receives a notice from the court that she has been selected as a lay judge for a shocking criminal case. The defendant in the case is Ando Mizuho, a full-time housewife who is the same age as Risako. She is on trial for child abuse that resulted in the death of her 8-month-old daughter by dropping her into the bathtub. Through an interview in court, Risako was chosen to be an alternate judge who will take the place of any juror that is forced to withdraw for reasons such as a sudden illness. As a mother herself, Risako feels repulsed that Mizuho killed her own child. However, after the trial opens, Mizuho’s circumstances gradually remind Risako of her own past. The words exchanged between couples and parents and children behind closed doors cuts like a knife sometimes. Risa soon becomes confused with the chaotic feelings that have lain dormant in her.

Characters
Shibasaki Kou as Yamazaki Risako
A full-time house wife who is bringing up her 3-year-old daughter Fumika. She has been leading an uneventful life. But one day, she gets chosen to be an alternate judge for a case of child abuse that resulted in the death of an infant.

Tanabe Seiichi as Yamazaki Yoichiro
Yamazaki Risako’s husband. An elevator system technician. He dotes on their daughter. He worries about his wife being chosen to be an alternate judge.

Mizuno Miki as Ando Mizuho
The defendant in the trial. A full-time housewife who caused the death of her eight-month old daughter through abuse.

Mashima Hidekazu as Ando Hisashi
Ando Mizuho’s husband. He changed to a company that pays a high salary after he got married to Mizuho and they had a child.

Ito Ayumi as Haga Mutsumi
The chief editor of a female magazine. She was chosen to be a juror in Ando Mizuho’s trial. She and her husband Naoto, who works for an advertising agency, appear to be the perfect couple, but they are actually troubled about infertility and long for a child.

Baisho Mitsuko as Ando Kunie
Ando Mizuho’s mother-in-law. A calligraphy instructor. Her husband died young and she raised their only son on her own.

Takahata Atsuko as Misawa Michiko
Yamazaki Risako’s mother who lives in Niigata Prefecture. She decides what is right based on her own set of values and ties her daughter down.

Fubuki Jun as Yamazaki Satoko
Yamazaki Risako’s mother-in-law. A housewife. Because she is old-fashioned, she takes care of her husband Kazuhiko and son Yoichiro hand and foot.

Original Work
Saka no Tochuu no Ie by Kakuta Mitsuyo