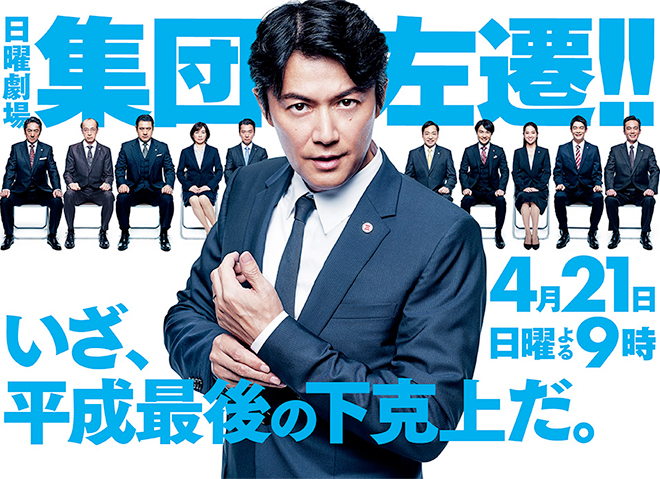 Story
Kataoka Hiroshi is an ordinary salaryman who works for Mitsutomo Bank, a large bank. One day, he receives a promotion to be the manager of the bank’s Kamata branch. Kataoka is delighted by the sudden appointment before his 50th birthday. However, his joy is doused once he learns that the branch is slated to wind up business. Managing director Yokoyama Teruo aims at complete rationalisation and Kataoka is told that he does not have to achieve the quota since the branch will be closed down within six months. In addition, he is informed that he does not need to put in hard work and is promised preferential treatment. Once the branch is closed without a hitch, he will return to headquarters. Kataoka is uncomfortable with being told not to work hard and meet the quota for the first time in his life. He wonders if it is fine to wait for the decision to wind up. On his first day of work as branch manager, they are contacted about the disappearance of the CEO of a company that the Kamata branch had made a loan of 50 million yen to. While Kataoka searches for this CEO, Yokoyama’s words cross his mind. Two days later, deputy branch manager Mayama Toru calls to inform him that headquarters will be coming to check on the branch’s loans. Kataoka cannot bring himself to tell the unsuspecting employees at the branch who will be laid off. He is conflicted about his position and as he sees their efforts, he begins to think that it is impossible to do as he was told. This is the start of his battle.

Characters
Fukuyama Masaharu as Kataoka Hiroshi
He joined Mitsutomo Bank, a major bank, and had been working at its headquarters. However, he is promoted to be the manager of the bank’s Kamata branch, which was the head office of the former Daishowa Bank as he approaches 50. His personality is such that he hates to lose and can get too heated up. For that reason, he cannot stand unreasonable things and will even make his opinions known to his superiors. He sometimes gripes about things he cannot say at the bank while at a stone sauna after work with his childhood friends Aoshima Kenji and Suzuki Masayuki, and lets the stress out.

Kagawa Teruyuki as Mayama Toru
He joined Daishowa Bank and became an employee of Mitsutomo Bank after the merger. He does not express his feelings very much. When he was young, he was a workaholic who battled round the clock. He delivered results and found meaning in helping small and medium enterprises that had difficulties getting loans. But there came a point when he started to stop what he was doing for the day and leave on time no matter how busy he was. Kataoka Hiroshi does not know whether he is a foe or ally.

Kamiki Ryunosuke as Takigawa Koji
A bright young man who joined Mitsutomo Bank after graduating from elite schools. He is handsome and outstanding in both studies and sports. He was a candidate for an executive position and in charge of corporate sales at the bank’s Shinjuku and Osaka branches, but dropped out because of some incident.

Nakamura Anne as Kida Mieko
A former delinquent who dropped out in the fall during her first year of high school. She is actually a hardworking person who made it to university after taking the university entrance exam. She hates anything dishonest as well as old men who reek of cheap cologne. She tends to be treated with great caution because she does not mince her words. She beat up her boss for sexually harassing her and was demoted to the Kamata branch as a result. She is stylish, cheerful and ambitious. She is studying English because she is interested in working overseas.

Ichimura Masachika as Fujita Hideki
The president of Mitsutomo Bank. He comes from Daishowa Bank so the real power is held by the chairman Goda Narimichi and vice president Nanko Masaru who come from Mitsutomo Bank. He feels compelled to approve the personnel retrenchment in recent years to cut costs, for the sake of the bank’s future.

Sakou Yoshi as Yadori Masashi
Kataoka Hiroshi’s ex-boss. Although he is not able to do much work, he is politically savvy and good at finding and ingratiating himself with people who are likely to haul him up. He feels uneasy about Kataoka, who has defied him at every turn.

Hashizume Jun as Nanko Masaru
The vice president of Mitsutomo Bank. He comes from Mitsutomo Bank. He conspires with Yokoyama Teruo with the intention of closing down all Daishowa Bank-affiliated branches. He feels threatened by Yokoyama’s existence and always thinks that it is good that he is a junior.

Omi Toshinori as Umehara Takashi
He joined the Mitsutomo Bank at the same time as Kataoka Hiroshi. An elite who has experience as the manager of the bank’s major Osaka and Nagoya branches. However, something also happens to Umehara. That is … …

Mikami Hiroshi as Yokoyama Teruo
A managing director at Mitsutomo Bank. He joined the bank after graduating from university. He is an aggressive man who can instantly distinguish foe from ally. He uses honorific expressions with everyone. He is extremely cautious and is said to be a man without any demerit points in the personnel evaluation. He is currently pushing through a large-scale streamlining exercise based on two pillars – elimination and consolidation of bank branches and retrenchment of employees.

This blog contains information and musings on current and upcoming Japanese dramas but is not intended to be comprehensive.
View all posts by jadefrost →
This entry was posted in Spring 2019 Dramas, TBS/MBS and tagged Fukuyama Masaharu, Ichimura Masachika, Kagawa Teruyuki, Kamiki Ryunosuke, Mikami Hiroshi, Shudan Sasen!. Bookmark the permalink.