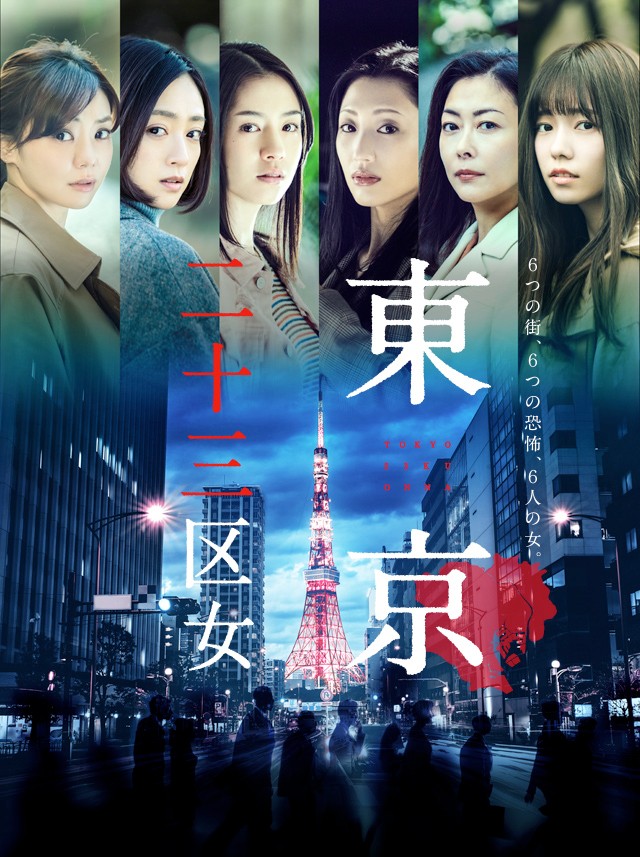 Story
Freelance writer Harada Ririko and her senior, Shimano Hitoshi, a former lecturer on folklore go around to Tokyo’s hidden spots with horror stories. They encounter many apparitions in places that everyone knows about in the 23 wards.

Shibuya-ku no Onna
Synopsis: Ririko (Shimazaki Haruka) and Shimano (Okayama Amane) sense some strong pulse on the streets crowded with young people in Shibuya ward. Under their feet and the asphalt covered streets, a river hidden from the surface and enclosed in the darkness of subterranean drains flows freely. A sad truth has also been concealed. Meanwhile, Ryoko (Kurashina Kana), a bride-to-be, receives an email that says her missing mother Kasumi (Tsukifune Sarara) wants to meet. She enters the subterranean drains on her own in search of her mother and meets a mysterious man (Sano Shiro).
Cast: Kurashina Kana, Tsukifune Sarara, Sakata Masanobu, Sano Shiro

Koto-ku no Onna
Synopsis: In the past, the whole of Yume no Shima in Koto ward was once a landfill. Now Yume no Shima Park is a place where families can relax but what was buried in the vast landfill that is sealed in darkness? One night in 1974, Nobuko (Adachi Yumi) and her lover Shiro (Hasegawa Tomoharu), who is the owner of a traditional Japanese restaurant in Fukagawa, arrive at this place to dump a big bag. Then a shocking outcome surprises Nobuko who is carrying his child.
Cast: Adachi Yumi, Kamimura Ami, Kuno Makiko, Hasegawa Tomoharu, Suzuki Sawa

Teshima-ku no Onna
Synopsis: The fate of the “Ikebukuro woman” dates back to the Edo Period. Ririko meets a man (Kohinata Fumiyo) who is searching for his missing daughter Mio (Sakuraba Nanami). She discovers Mio in Higashi Ikebukuro Chuo Park which is rumoured to be a massive grave site created after the end of World War II to bury the many war criminals who were executed. However, Mio tells Ririko that she is not that man’s daughter.
Cast: Sakuraba Nanami, Fujiwara Kisetsu, Kohinata Fumiyo

Minato-ku no Onna
Synopsis: The driver (Takenaka Naoto) of the taxi that Kie (Dan Mitsu), a fashion designer, got into asks her a curious question, “Do you know why Odaiba has ‘o’ affixed to it?” However, this driver roams various parts of Minato-ku after dark without heading to the destination. Kie’s life flashes before her like a revolving lantern. Why can’t the taxi get to its destination? Kie’s cruel reality and a shocking outcome are gradually revealed.
Cast: Dan Mitsu, Onishi Shima, Takenaka Naoto

Itabashi-ku no Onna
Synopsis: A tree which is effective in severing ties between man and woman has been enshrined in a corner of Itabashi ward’s main street since ancient times. Kaoru (Nakayama Miho) suspects her husband (Ogi Shigemitsu) of infidelity and tails him. She sees her husband visit the tree and leave a wooden votive tablet with characters like code. To Kaoru, the tree is a place with a “connection” to her, and her confusion and misgivings are amplified. The shocking truth of the code concealed in the votive tablet and the true form of the terrifying thing that has possessed her are revealed.
Cast: Nakayama Miho, Mafia Kajita, Asakawa Yu, Ogi Shigemitsu

Shinagawa-ku no Onna
Synopsis: The remains of the Suzugamori execution grounds dates back to the Edo Period. Police officer Kiuchi (Shirasu Jin) who works in a police box in the Shinagawa ward, sees a mysterious woman at crime scenes on numerous occasions. This woman is Ririko. Kiuchi questions her about entering the Suzugamori execution grounds but she begins talking about the facts of an unexpected case. What is the identity of the person who has been watching Kiuchi intently and the secret surrounding Ririko?
Cast: Shimazaki Haruka, Shirasu Jin, Yamasaki Mami, Fujiki Yuki, Okayama Amane