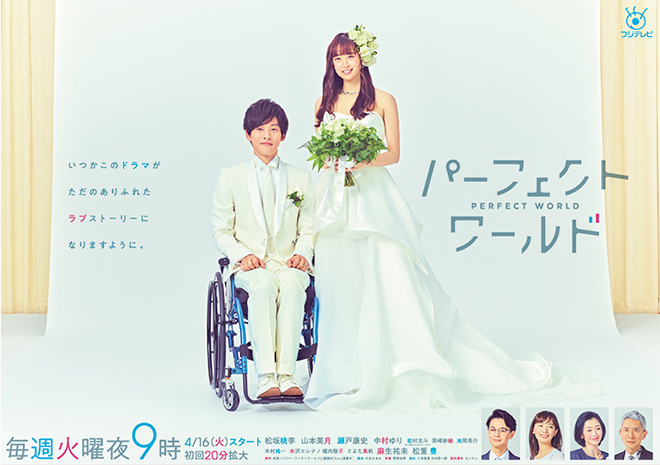 Story
Kawana Tsugumi dreamt of becoming an illustrator when she was a student and promised her father that she would return to Nagano Prefecture once she graduates. She entered a Tokyo university but did not go back to her hometown even after graduation. She now lives with her younger sister Shiori while doing clerical work at an interior design firm. One day, Tsugumi is asked by her superior Azuma Michiyo to represent her at a meeting with an architect firm. This is where she meets her first love and former high school classmate Ayukawa Itsuki. Itsuki is an architect who works for Watanabe Tsuyoshi’s architect firm. Tsugumi’s heart skips a beat at this chance meeting and tells all present about Itsuki’s high school days when he was the captain of the basketball club. She innocently asks “You’re not playing basketball anymore?” and in the next instant, she sees him in a wheelchair and is lost for words. In fact, Itsuki suffered spinal injury while he was in university and can no longer walk. The next day, Itsuki takes a mortified Tsugumi, who had come to his office to apologise for her insensitive remarks, to a park up on a hill. Tsugumi listens to Itsuki’s passion for his work, she realises that apart from his disabilities, he is still the same old Itsuki. One thing leads to another and it is decided that he will go with Tsugumi to an art exhibition that she had intended to attend alone. On the day of the appointment, Koreeda Hirotaka, a former classmate of both Tsugumi and Itsuki, visits Tsugumi’s apartment after she leaves. Hirotaka has had a secret crush on her since high school days and is shocked to hear from Shiori that Tsugumi has gone out with Itsuki. However, at that moment Tsugumi is made to realise the difficulty of an outing in a wheelchair rather than delight in her “date”. She is also disconcerted when she learns that he broke up with Yukimura Miki, his girlfriend since high school, after the accident and has no intention of being romantically involved with anyone again. Itsuki and Tsugumi are attracted to each other. However, they face problems including disapproving parents, the appearance of a love rival and illness as they search for the meaning of happiness.

Characters
Matsuzaka Tori as Ayukawa Itsuki
A registered architect with a first-class licence at Watanabe Architects. He was a top basketball player during high school days but got involved in an accident when he was in his third year in university and became paralysed from waist down due to a spinal cord injury. He broke up with his girlfriend Yukimura Miki and felt despaired of the future. However, with the support of the people around him, he fulfilled his dream of being an architect. Now at the age of 29, he is in charge of designing homes that are free of barriers. He thought that he had given up on romance and basketball, but … …

Yamamoto Mizuki as Kawana Tsugumi
A clerk in charge of administrative work at the interior design company Cranberries. She meets Ayukawa Itsuki, whom she had a secret crush on when she was a high school student, again by chance. Even though she is shocked that he is wheelchair-bound, she wants to support him. She used to belong to the art club back in high school and aspired to enter an arts college. However, she did not have confidence in her own abilities and gave up on the entrance exam.

Seto Koji as Koreeda Hirotaka
Kawana Tsugumi’s former classmate. He runs a company in Tokyo that creates apps. Because he is a childhood acquaintance of Tsugumi’s, he decides to confess his feelings once his business is doing well. Owing to bad timing, Tsugumi and Ayukawa Itsuki reunite and he ends up going back to his position as her confidant once again. Even though he gently watches over Tsugumi, he is unable to move past his feelings for her.

Nakamura Yuri as Nagasawa Aoi
A helper who provides home nursing care. She visits Ayukawa Itsuki’s apartment several times a week. When she was a nurse, she encouraged and got a depressed Itsuki, who was hospitalised, back on his feet again. She treats Kawana Tsugumi who appeared all of a sudden harshly because she saw Itsuki’s suffering. She got married after Itsuki was discharge but is currently in the midst of divorcing her husband.

Kimura Yuichi as Watanabe Tsuyoshi
The head of Watanabe Architects. Nicknamed Nabe-san, he has been researching and promoting architecture that is free of barriers. He was introduced to Ayukawa Itsuki by the nurse Nagasawa Aoi when Itsuki was hospitalised because of an accident and felt depressed about his future. He understands Itsuki very well and has also become his confidant.

Aso Yumi as Ayukawa Fumino
Ayukawa Itsuki’s mother. She is an insurance agent in Nagano Prefecture. Although she wishes to send for her son and live together with him, he flatly refuses. So she goes to Tokyo feeling concerned. She yearns for her son’s happiness even if it means someone has to sacrifice.

Matsushige Yutaka as Kawana Motohisa
Kawana Tsugumi’s father. He lives in Nagano Prefecture. He works at the municipal office’s Welfare Division where he takes the lead in town planning to create a livable environment for the elderly and persons with disabilities. He dotes on Tsugumi and is also overprotective. He made her promise that she would return to Nagano if she was still single at 30 in exchange for his permission to advance her studies in Tokyo.

This blog contains information and musings on current and upcoming Japanese dramas but is not intended to be comprehensive.
View all posts by jadefrost →
This entry was posted in Fuji TV, Spring 2019 Dramas and tagged Aso Yumi, Matsushige Yutaka, Matsuzaka Tori, Perfect World, Seto Koji, Yamamoto Mizuki. Bookmark the permalink.