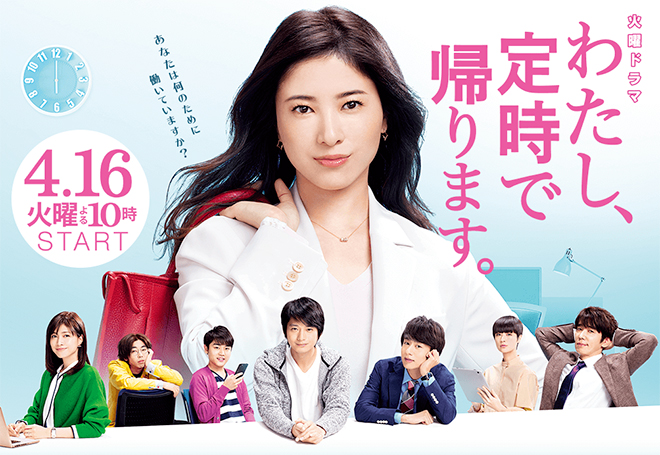 Story
32-year-old Higashiyama Yui is a director at Net Heroes, a web production company. Her motto has been to leave work on time ever since she joined the company because of some past traumatic experience. Yui does not believe in living for work. In a climate where it is hard to go off without a reason, she tries to be more effective than anyone else as well as highly productive while in office. Yui cherishes time with her boyfriend Suwa Takumi, and enjoying beer at her regular Chinese restaurant after she leaves office. However, when a new department manager Fukunaga Seiji comes on board, her life starts to change. She struggles between her boss and colleagues Taneda Kotaro, her workaholic ex-fiancee; Azuma Toru, the inefficient front-end engineer who lives in the office; Kurusu Taito, the unmotivated newbie who always talks about quitting; Mitani Kanako, a fellow web director with a perfect attendance, and Shizugatake Yae, her mentor who has just had twins; but pulls off small miracles every day.

Characters
Yoshitaka Yuriko as Higashiyama Yui
A web director at the web production company Net Heroes. Her motto is to never work overtime and she has been leaving office punctually ever since she joined the company. Growing up, her workaholic father did not come home and she thoroughly rejects that lifestyle of living for work. Her daily routine after work is to drink beer during her regular Chinese restaurant’s happy hour. At work, she places emphasis on efficiency and strives for a way of working that does not inconvenience others.

Mukai Osamu as Taneda Kotaro
The deputy manager of the Fourth Production Department and a web producer. Higashiyama Yui’s ex-fiance. He met Yui when he was working in the company where Fukunaga Seiji served as CEO, and they got engaged. However, they spent little time together because work came first and eventually broke off the engagement. After that, he was headhunted and moved to Net Heroes. He is a workaholic who becomes oblivious of his surroundings when he gets too focused on work. The most capable guy in office, he has no lack of followers among the juniors and is also trusted by his team members.

Nakamaru Yuichi as Suwa Takumi
Higashiyama Yui’s boyfriend. He works for Basic On which is Net Heroes’ rival and the biggest company in the industry. He is a family-oriented guy and an ideal partner to Yui. He likes the outdoors. He cooks and goes on outings, cherishing private time more than work. On the other hand, he is also an excellent salesman and admired by his juniors.

Santamaria Yusuke as Fukunaga Seiji
The newly appointed manager of the Fourth Production Department. He founded a company in his 30s after working at at several companies and building his career. He had been running the small web production company as the CEO but sold it and went to work for Net Heroes. He has known Taneda Kotaro since the last job. He hired Kotaro who was a fresh graduate at the time and groomed him. Although he is easily flattered, he also has a frightening side at times.

Uchida Yuki as Shizugatake Yae
Higashiyama Yui’s senior. She trained Yui when was a new employee. A web director. She gave birth to twins and is currently on maternity leave. She loves her work and wants to quickly return to the workplace. They are good friends whose relationship goes beyond that of senior and junior. She is a good confidant and kept an agitated Yui company over drinks every night when Yui’s engagement to Taneda Kotaro was called off.

This blog contains information and musings on current and upcoming Japanese dramas but is not intended to be comprehensive.
View all posts by jadefrost →
This entry was posted in Spring 2019 Dramas, TBS/MBS and tagged Mukai Osamu, Santamaria Yusuke, Uchida Yuki, Watashi Teiji de Kaerimasu, Yoshitaka Yuriko. Bookmark the permalink.