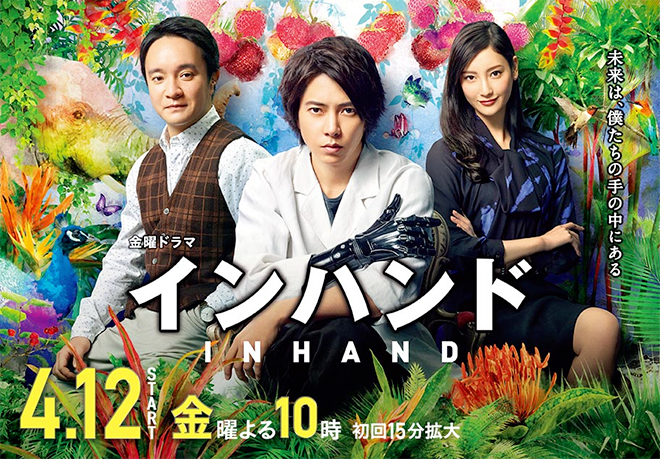 Story
Himokura Tetsu is a scientist who specialises in the study of parasites. He bought a massive botanical garden in the outlying Kanto region which he converted into his home and research lab. He holes up in the conservatory where he researches his favourite parasites. Although Tetsu dislikes people and is very sadistic eccentric, he is knowledgeable and has the mind of a genius. His right arm is fitted with a black robotic hand. However, it is not known how this artificial hand came about. One day, Makino Tomoe from the Cabinet Secretariat’s Medical Science Office visits Himokura. The Medical Science Office is a team which deals with all sorts of issues that arise in scientific and medical institutions. With the advances in science and globalisation, it was established to handle unknown illnesses and cases that go beyond conventional notions. They have received an anonymous warning letter about the possibility that several patients who died of heart attack at a hospital, had contracted the infectious Chagas disease which is rarely seen in Japan. If there really are people infected with Chagas disease in the country, this is a serious matter. Believing that ordinary doctors and scientists will not be able to deal with it, The Medical Science Office directed Makino to visit Himokura who is an expert on parasites, unknown organisms and diseases. Himokura is only interested in his research and flatly refuses to cooperate with her. However, Makino offers a deal that he cannot resist. The two of them quickly go to meet Takaie Haruma, the doctor who treated patients with the suspected infection. With Takaie’s help and some sleuthing, they stumble upon a case that happened 10 years ago. Together with Makino and Takaie, Tetsu goes on to solve a series of difficult cases with astounding scientific methods.

Characters
Yamashita Tomohisa as Himokura Tetsu
An eccentric scientist with a robotic right hand. He specialises in the study of parasites. He is obstinate, blunt and only gets into action if something is his interest. However, he is knowledgeable and has the ideas of a genius. He works on things that he is interested in with the glee of a teenager. He is somehow wealthy and bought a massive botanical garden in Hakone which he converted into his home and research lab outfitted with the most advanced equipment. He lives with animals such as a dog, snake and tortoise in his research lab and jungle-like conservatory. He is deeply attached to organisms and their ecology but is indifferent to humans. He is called an eccentric and oddball for that reason.

Hamada Gaku as Takaie Haruma
An earnest emergency doctor with a strong sense of duty, he hopes to work for Médecins Sans Frontières some day. However, he meets the eccentric Himokura Tetsu through a case and is pulled in as his assistant. He is a good-natured guy who ends up helping out against his better judgment even when Himokura makes unreasonable demands. In the end, he always gets pushed around by the self-serving Himokura. In contrast to Himokura, he has a gentle but meddlesome nature. He dreads parasites.

Nanao as Makino Tomoe
A beautiful and sharp government official who graduated at the top of her cohort at Tokyo University. She is on secondment to the Cabinet Secretariat’s Medical Science Office from the Foreign Ministry. Because of her strong desire to return to the Foreign Ministry as quickly as possible, she baits Himokura Tetsu with something in exchange for his cooperation in a case. She is capable of doing anything in order to achieve her goals. She gets into skirmishes with the eccentric Himokura who only gets involved if it interests him, and the kindhearted Takaie Haruma at every turn.

Mitsuishi Ken as Amino Hajime
The head of the Cabinet Secretariat’s Medical Science Office who was seconded from the National Police Agency. He is the type who wants to maintain the status quo, thinking that he can return to the agency in due course if he does not cause big problems and passes the time uneventfully. He believes there is no need to poke one’s nose into a problem and that it is better to tackle the problem when it arises. As a result, he constantly has disputes with the proactive Makino Tomoe who wants to achieve results and quickly go back to the Foreign Ministry.

This blog contains information and musings on current and upcoming Japanese dramas but is not intended to be comprehensive.
View all posts by jadefrost →
This entry was posted in Spring 2019 Dramas, TBS/MBS and tagged Hamada Gaku, In Hand, Mitsuishi Ken, Yamashita Tomohisa. Bookmark the permalink.