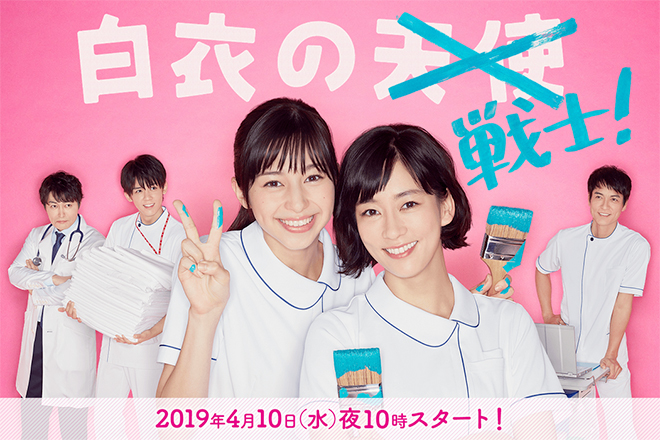 Story
Rookie nurse Tachibana Haruka has just started working at Shiki General Hospital’s surgery ward. She is actually a reformed delinquent. Although cheerful and unconventional, she hates anything crooked and unreasonable. She is even known to be compassionate and easily moved to tears. Although Haruka fulfilled her childhood dream to become a nurse, she is constantly shocked by the gap between the world she had imagined and reality. She is motivated but has a tendency to go round in circles so she keeps getting scolded by her supervisor Mihara Natsumi while her contemporary, the dependable Saito Hikaru, has a lead over her. A veteran nurse of 13 years, Natsumi has the disposition of a caring big sister. She is trusted by their superiors, colleagues as well as patients. But she is just hopeless romantic who wants to pampered by a man. She has been proactively hunting for a marriage partner so that she can quit being a nurse by the time she is 35, but she has not been successful yet. At first, Natsumi is reluctant to train Haruka who is such a handful. But as she sees Haruka’s diligence, her feelings gradually begin to change. The first patient that Haruka is put in charge of is a high school student Junya, who has been hospitalised for bowel obstruction. He tries to smoke cigarettes in hospital, eat solids against the advice of his doctor Yagira Keiichiro and displays all sorts of problematic behaviour. Haruka hears from the head nurse Honjo Akiyuki that Junya’s mother Tomoko has barely come to see him. She wonders whether that is the reason for Junya’s defiant behaviour and marches over to Tomoko’s workplace … …

Characters
Nakajo Ayami as Tachibana Haruka
A rookie nurse who is a former delinquent. She is cheerful, uninhibited and hates irrational things. She is compassionate and easily moved to tears. Even though she gets yelled at day after day for making mistakes, she never loses heart but quickly pulls herself together with characteristic grit and smiles cheerfully.

Mizukawa Asami as Mihara Natsumi
Tachibana Haruka’s “strict” supervisor. A veteran nurse who is in her 13th year. She no longer finds her job rewarding and has been actively looking for a marriage partner with the goal of quitting after getting married by 35. However, she has not had a boyfriend in three years. Although she loathes being a supervisor, her feelings gradually change as she watches Haruka.

Kotaki Nozomu as Saito Hikaru
A rookie nurse who is Tachibana Haruka’s contemporary. He is a delightful, sporty young man who does his work efficiently. The senior nurses find him a very good nurse. Although he treats everyone kindly, Haruka regards him as a rival and they often quarrel.

Sawamura Ikki as Honjo Akiyuki
The chief nurse of the surgery ward. He is cheerful and mild-mannered. As he has been working in a female-dominated profession for a long time, he also shows perfect consideration for his subordinates. When it comes to the crunch, he is a dependable boss who will even fight against the top.

Yasuda Ken as Yagira Keiichiro
A surgeon who looks laid-back but is actually an outstanding doctor. Because of that, it seems that he was rather popular in the past. However, he is now a hen-pecked husband.

This blog contains information and musings on current and upcoming Japanese dramas but is not intended to be comprehensive.
View all posts by jadefrost →
This entry was posted in NTV, Spring 2019 Dramas and tagged Hakui no Senshi, Mizukawa Asami, Sawamura Ikki, Yasuda Ken. Bookmark the permalink.