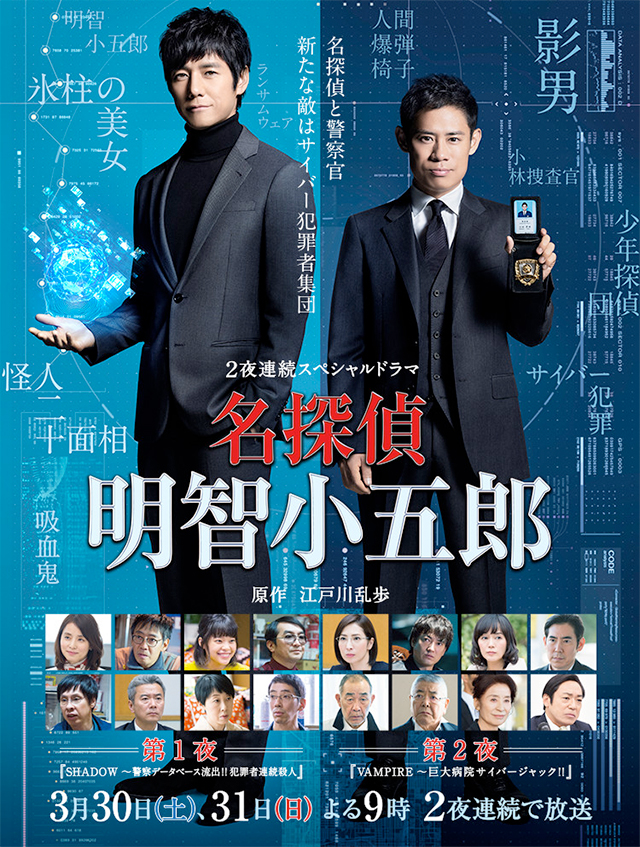 First Night: Shadow ~ Keisatsu Database Ryushutsu!! Hanzaisha Renzoku Satsujin
Synopsis: A hacker group called Phantom 20 which is wanted internationally, wages a sudden cyber attack on Hikari Bank which is the nerve centre of Japan’s financial sector. While the bank’s vice president Udagawa (Nakao Akira) frets, Namikoshi Kenjiro (Kagawa Teruyuki), the head of the Tokyo Metropolitan Police Department’s criminal investigations, takes command and an investigation task force scrambles an emergency response. But they do not stand a chance. However, a man saves them from this unprecedented predicament. The man’s name is Akechi Kogoro (Nishijima Hidetoshi). The former CEO of AK Logistics, a cyber security company which is currently headed by his wife Fumiyo (Ishida Yuriko), he leads Team BD which has brilliant hacking skills and he himself has the best cyber knowledge and skills. His talent has drawn the attention of Namikoshi who sends Kobayashi Yoshio (Ito Atsushi), a senior officer from the Tokyo Metropolitan Police Department’s Cyber Investigation Support Office, to Akechi with an invitation for him to be an advisor in cybercrime investigation. He is immediately asked to identify the criminal in a case. In fact, half a month ago, someone leaked confidential data containing the present addresses of former juvenile offenders and released the information online. Namikoshi fears a second former juvenile offender will be harmed and does everything he can to track the criminal as quickly as possible. Akechi deciphers the code that appeared on the website at once and succeeds in making contact with a criminal by the name of Shadow. At that moment, Shadow makes on move on his actual target, declaring that the first target will be punished. Shadow produces a difficult new code which they are given one hour to crack. Akechi smiles confidently at this declaration of hostilities and takes up the challenge but … …
Cast: Nishijima Hidetoshi, Ito Atsushi, Ishida Yuriko, Kishii Yukino, Nakao Akira, Kagawa Teruyuki

Second Night: Vampire ~ Kyodai Byouin Cyberjack!!
Synopsis: Right after brilliantly solving a kidnapping case, Akechi Kogoro (Nishijima Hidetoshi) carelessly falls down a flight of steps and is admitted to a big hospital called Josai Medical. Strangely enough, this is the same hospital that is aggressively adopting medical technology such as robot-assisted surgery which Minister of Health, Labour and Welfare, Kawamoto Keiko (Baisho Mitsuko), is a leading proponent. In order to personally vouch for the safety of such technology, she even announces that she will undergo heart surgery and draws sudden attention. Meanwhile, a bizarre incident takes place. Someone hacks a security system and switches all the cooking recipes on the Ministry of Health, Labour and Welfare’s official website. However, there are no specific leads on the hacker and the Tokyo Metropolitan Police Department stand idly by. Then Kobayashi Yoshio (Ito Atsushi) is ordered by Namikoshi Kenjiro (Kagawa Teruyuki) to ask for Akechi’s assistance in the investigation and visits Josai Medical where Akechi is hospitalised. At that very moment, Kawamoto’s security police including Sawai Masakazu (Takashima Masanobu) are standing guard inside the hospital. Kawamoto’s surgery is about to begin. However, right after it starts, there is confusion in the hospital. The hospital’s network has been hit by a ransomware attack and all computers are down. Even the medical robotic arm will not move and remains inside Kawamoto’s body. At the same time, an unsettling message is broadcast within the hospital, “There are criminals in this world who suck the lifeblood of innocent people and line their pockets.” Akechi and Kobayashi quickly try to restore the computers. However, men with mysterious tattoos stand in their way.
Cast: Nishijima Hidetoshi, Ito Atsushi, Takashima Masanobu, Ishida Yuriko, Kishii Yukino, Baisho Mitsuko, Kagawa Teruyuki

This blog contains information and musings on current and upcoming Japanese dramas but is not intended to be comprehensive.
View all posts by jadefrost →
This entry was posted in Spring 2019 Drama Specials, TV Asahi and tagged Ishida Yuriko, Kagawa Teruyuki, Meitantei Akechi Kogoro, Nishijima Hidetoshi, Takashima Masanobu. Bookmark the permalink.