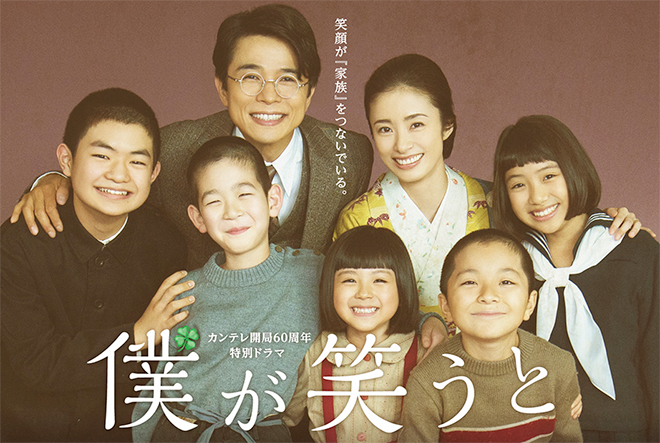 Date: From 9.00 p.m., 26 March 2019
Scriptwriter: Ozaki Masaya (Signal, Chinmoku Houtei, Omukae Death)
Cast: Inohara Yoshihiko, Ueto Aya, Matobu Sei, Iitoyo Marie, Takada Sho, Sakai Maki, Shirasu Jin, Aso Yumi, Yoshiyuki Kazuko
Synopsis: One spring day, an elderly woman (Yoshiyuki Kazuko) who has been confined to her hospital bed, summons her four grandchildren including Emi (Iitoyo Marie) and Shinichi (Takada Sho) and starts talking to them about her parents and siblings. The family she grew up in 70 years ago was quite unlike any other family. Back in 1937 in Osaka, Suzuki Juzaburo (Inohara Yoshihiko) was an associate professor at Osaka University of Science and a botanist. Juzaburo and his cheerful, gentle wife of 10 years, Seiko (Ueto Aya), were not blessed with children. However, he accepted this and the couple got along well. Nevertheless, Seiko’s desire to become a mother did not go away. A farewell party for Kazuya (Shirasu Jin), the son of Juzaburo’s elder sister, Osawa Noriko (Matobu Sei), who was being posted to Manchuria, reinforced her strong desire to have children. Several days later, Seiko saw children playing in the garden of an orphanage run by Mamiya Kimiko (Aso Yumi) and discussed the adoption of orphans with Juzaburo. Although he initially expressed a lack of confidence in raising children, her eagerness overwhelmed him and they adopted Kota as their child. While Seiko treated Kota kindly, Juzaburo remained awkward but gradually learned to scold and praise the boy, and grow as a father. From someone who lived only for research, Juzaburo found a new purpose in life and his world completely changed. He only had to laugh for Kota to laugh. This quiet man who hardly expressed his feelings, smiled more and more. And then one day, he mumbled that maybe their son would be happy if he had siblings. Seiko responded that they could get that done quickly. Six years later, the Suzukis had become a big family with five children, Kota (Watanabe Ao), Setsuko (Ito Shiho), Kensaku (Ishizawa Shuto), Toranosuke (Harada Keita) and Tomeko (Takenoya Saki). Before long, Juzaburo’s research assistant Yoshida Shiro (Ryusei Ryo) received draft papers and the Pacific War also affected Juzaburo’s surroundings. Life for the Suzukis became increasingly difficult. Even so, Juzaburo and Seiko kept on smiling and so did their children. However, the war steadily cast a shadow on the family’s future … …
Official Website: www.ktv.jp/bokugawarauto