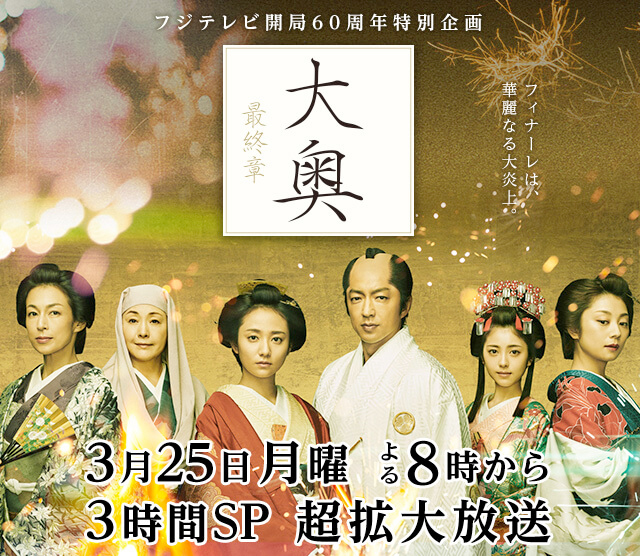 Date: From 8.00 p.m., 25 March 2019
Scriptwriter: Asano Taeko (Tasogare Ryuuseigun, Gomen Aishiteru, Dakara Kouya)
Cast: Kimura Fumino, Osawa Takao, Koike Eiko, Hamabe Minami, Minamino Yoko, Kishii Yukino, Washio Machiko, Yamaguchi Kaori, Kubota Maki, Asano Yuko, Kitamura Kazuki, Tanihara Shosuke, Katsurayama Shingo, Matsuzaka Keiko, Suzuki Honami
Synopsis: Tokugawa Yoshimune (Osawa Takao), the eighth Tokugawa shogun, instituted the Kyoho Reforms aimed at rebuilding the government’s finances. He is called the ancestor who restored the Tokugawa family and is also well-known as the “wild shogun”. Born the fourth son of Tokugawa Mitsusada, who was the second feudal lord of Kii Province, Yoshimune hailed from one of the three branches of the Tokugawa family, and was a great grandson of Tokugawa Ieyasu. Following the death of his father and elder brothers, he became lord of Kii. He did everything he could to turn around the finances of the province and achieved results. Then the death of the young seventh shogun, Tokugawa Ietsugu, saw the male bloodline since the second shogun Hidetada Yoshimune come to a sudden end. For the first time, a member of a branch family was adopted by the main branch and became the eighth shogun. However, Yoshimune’s succession as shogun was not entirely through his own might, but the machinations of the women of the inner palace including Teneiin (Suzuki Honami), the legal wife of Ienobu, and Gekkouin (Koike Eiko), Ietsugu’s biological mother. Behind this man who became one of the greatest Tokugawa shoguns in history was his concubine Kume (Kimura Fumino) who was his pillar of emotional support. Yoshimune lost his sickly legal wife Masako who hailed from the main Tokugawa family. After that, he took Kume, the daughter of a low-ranking samurai of Kii, who served his mother Joenin (Matsuzaka Keiko), as his concubine. He loved her deeply for her simple and gentle nature. Yoshimune had children with three concubines who passed away. Kume loved them as if they were her own and believed she would live happily together with Yoshimune and Joenin forever. However, the decree from Edo Castle to put Yoshimune forward to be the eighth shogun completely changed Kume’s ordinary but happy life. She had to give up the life she was accustomed to in Kii and move to the inner palace of Edo Castle. Although she felt a touch of anxiety, she gave Yoshimune a push, thinking that it would be a waste for a man of his ability to just be the feudal lord of a domain. After the decision was made, Kume naively looks forward to the splendid images painted on the sliding screen doors and household furnishings of Edo Castle. However, Teneiin and Gekkouin wage a battle for power on all fronts, and the inner palace where 1,000 beautifully dressed women go head-to-head in their attempt to seduce Yoshimune, shatters Kume’s naivety. Will she be able to protect Yoshimune and their three children from the intrigues of the inner palace?!
Official Website: www.fujitv.co.jp/oh-oku2019
Preview: Ooku Saishushou CM

This blog contains information and musings on current and upcoming Japanese dramas but is not intended to be comprehensive.
View all posts by jadefrost →
This entry was posted in Fuji TV, Spring 2019 Drama Specials and tagged Kimura Fumino, Koike Eiko, Ooku Series, Osawa Takao. Bookmark the permalink.