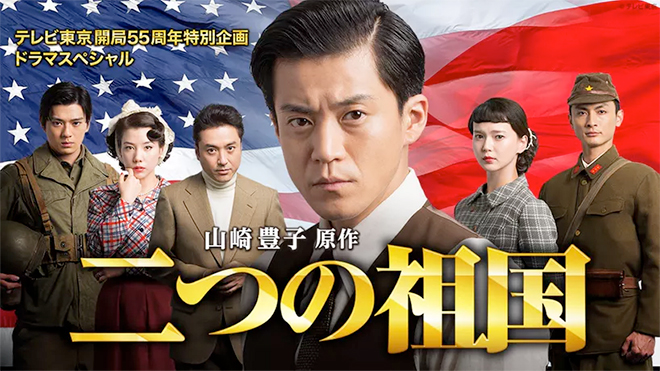 Date: From 9.00 p.m., 23 & 24 March 2019
Scriptwriter: Hasegawa Yasuo (Kubo Ibuki, Ano Koro Kimi o Oikaketa, Tantei Mitarai no Jikenbo Seiro no Umi)
Original Work: Futatsu no Sokoku by Yamazaki Toyoko
Cast: Oguri Shun, Tabe Mikako, Naka Riisa, Muro Tsuyoshi, Kora Kengo, Arata Mackenyu, Yo Kimiko, Aso Yumi, Matsushige Yutaka, Beat Takeshi, Shofukutei Tsurube, Nakamura Toru, Tanaka Tetsushi, Lily Franky, Ikeda Eliza, Hashimoto Manami, Emoto Tasuku, Komoto Masahiro, Negishi Toshie, Izumiya Shigeru, Nakamura Masatoshi, Morley Robertson, Thane Camus, Kent Gilbert, Atsugiri Jason, Harry Sugiyama, Daniel Kahl, Dave Fromm, George Williams, Murasame Tatsumasa, Oda Nobunari
Synopsis: Amou Kenji (Oguri Shun) is a second-generation Japanese who was born in the United States. His father (Matsushige Yutaka) migrated to the US from Hiroshima at the age of 19 and now runs a laundry shop in Los Angeles’ Little Tokyo. Kenji studied at UCLA after receiving an education in Japan. He has been working as a journalist with a Los Angeles-based Japanese newspaper, Kashu Shinpo, since his graduation. Kenji states in an editorial that striving to be a good Japanese, makes a worthy American citizen and tries to practice this himself. Imoto Nagiko (Tabe Mikako), a colleague at his workplace, is dating his classmate Charlie Tamiya (Muro Tsuyoshi) from ULCA days. Charlie is an ambitious man with emotional attachment to Japan. Although Kenji has mixed feelings about their close relationship, he goes on to marry Emi (Naka Riisa), Nagiko’s friend who is also a second-generation Japanese. However, when the Pacific War breaks out, Kenji’s circumstances completely change. Kenji, his father and mother (Aso Yumi) and those of Japanese descent are sent to the Manzanar War Relocation Centre where they are forced to live under restrictions. Before long, some among them are drafted into the US army. Which country should these second-generation Japanese pledge their allegiance to? America or Japan? They have to make a tough choice. Kenji’s youngest brother Isamu (Arata Mackenyu) volunteers for a unit made up of troops of Japanese descent while Kenji himself takes a position in military intelligence as a Japanese language instructor and code breaker in an attempt to swiftly bring an end to the war through information warfare. Meanwhile, their second brother Tadashi (Kora Kengo), who had been getting a university education in Hiroshima at the time the war began, is called up for military service by the Japanese army and sent to the battlefront in the Philippines. Kenji also heads to the Philippines as an intelligence officer. What is his destiny?
Official Website: www.tv-tokyo.co.jp/futatsunosokoku