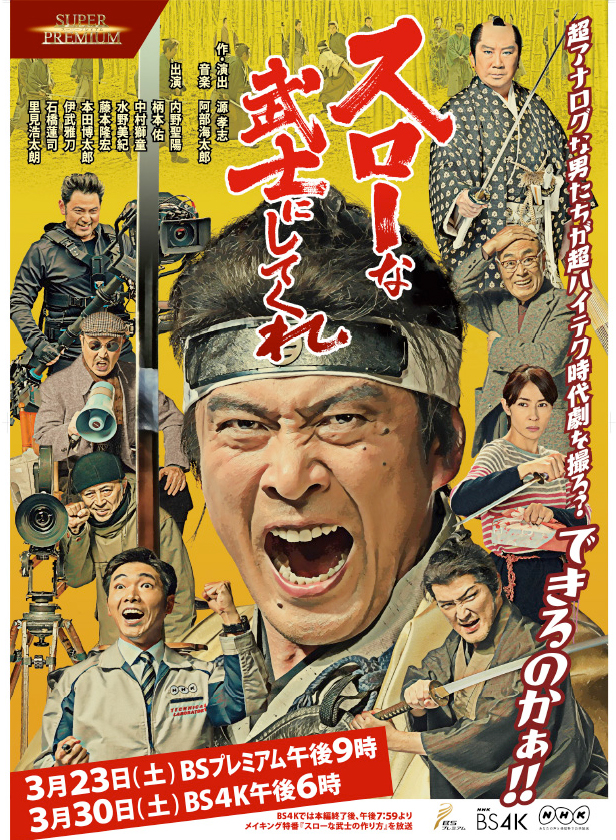 Date: From 9.00 p.m., 23 March 2019
Scriptwriter: Minamoto Takashi (Liquid, Kamisama no Boat, Tsugunai)
Cast: Uchino Masaaki, Emoto Tasuku, Nakamura Shido, Mizuno Miki, Fujimoto Takahiro, Moro Morooka, Fukami Motoki, Otaka Hiroo, Ise Shima, Furukawa Koji, Ikushima Yuki, Kusumi Kaoru, Nakagawa Haruki, Takahashi Aiko, Ishigaki Yuma, Mine Rantaro, Fukumoto Seizo, Hamada Akira, Sagawa Mitsuo, Honda Hirotaro, Ibu Masato, Ishibashi Renji, Satomi Kotaro
Synopsis: One day, a historical film studio in Kyoto receives a request from NHK which wants to make a new programme using the most advanced technology. Tadokoro Shinnosuke (Emoto Tasuku) is sent by NHK together with a pile of high-tech equipment. He grew up abroad but is a huge fan of historical dramas. When Tadokoro gets there, he says that he wants to dramatise the Ikedaya incident, which was a raid launched by the Shinsengumi against Imperial loyalists gathered at an inn called Ikedaya in Kyoto during the twilight years of the Tokugawa shogunate. This flabbergasts the people involved in drama production at the film studio. It can be a headache to use popular actors on a high-tech set where all sorts of problems are expected. So the head of the studio selects Murata Shigeo, otherwise known as Shige-chan (Uchino Masaaki), an actor of small parts who specialises in getting killed. He is supposed to film a punishing action scene filled with new technology. However, even though Shige-chan is stellar in choreographed sword battles, there is a reason why he has not gained much popularity. Furthermore, there are only elderly staff (Honda Hirotaro) handling the filming and they have no experience with technology. A series of problems occur and the climax they reach after overcoming difficulties is an unprecedented attempt at a 360° one-cut scene involving the world’s most advanced high speed camera and wire action for a scene where Shige-chan will fall down the stairs at Ikedaya. Will Shige-chan and the crew be able to surmount the high-tech challenges?
Official Website: www4.nhk.or.jp/P4031

This blog contains information and musings on current and upcoming Japanese dramas but is not intended to be comprehensive.
View all posts by jadefrost →
This entry was posted in NHK, Spring 2019 Drama Specials and tagged Mizuno Miki, Nakamura Shido, Surona Bushi ni Shite Kure, Uchino Masaaki. Bookmark the permalink.