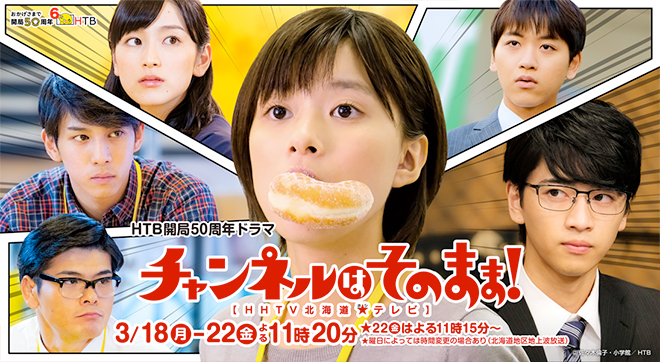 Story
Yukimaru Hanako is a rookie reporter with HHTV Hokaido, a local television station in Sapporo. She has made a string of blunders since she joined and keeps causing trouble to the people around her. In a debut battle with fellow presenters from the same batch, Hanako’s news story is just barely completed in time for the start of broadcast, and is also covered with an unbelievable number of misspelt characters. It’s an almost disastrous broadcast incident. Yamane Hajime, who joined the station at the same time and was assigned to the news department, always gets entangled in the uproar she causes and is also fed up with her repeated slip ups. However, Hanako is recruited for the station’s mysterious “fool” segment. Although Hanako is a troublemaker, strangely enough, she creates scoops or touching, dramatic scenes. A weather forecaster is enlightened by a word from her. An arson suspect who is on the run shows up where she has gone. Even Kanbara Masayoshi, a charismatic agricultural engineer who stays away from the media, as well as Katori, the information chief from HHTV’s rival network Higuma TV who constantly wins hands down in the ratings and typically pays no attention to HHTV, ends up getting taken by Hanako’s “storm” before they even realise it.

This blog contains information and musings on current and upcoming Japanese dramas but is not intended to be comprehensive.
View all posts by jadefrost →
This entry was posted in Netflix, Spring 2019 Dramas and tagged Channel wa Sonomama, Oizumi Yo, Yasuda Ken, Yoshine Kyoko. Bookmark the permalink.