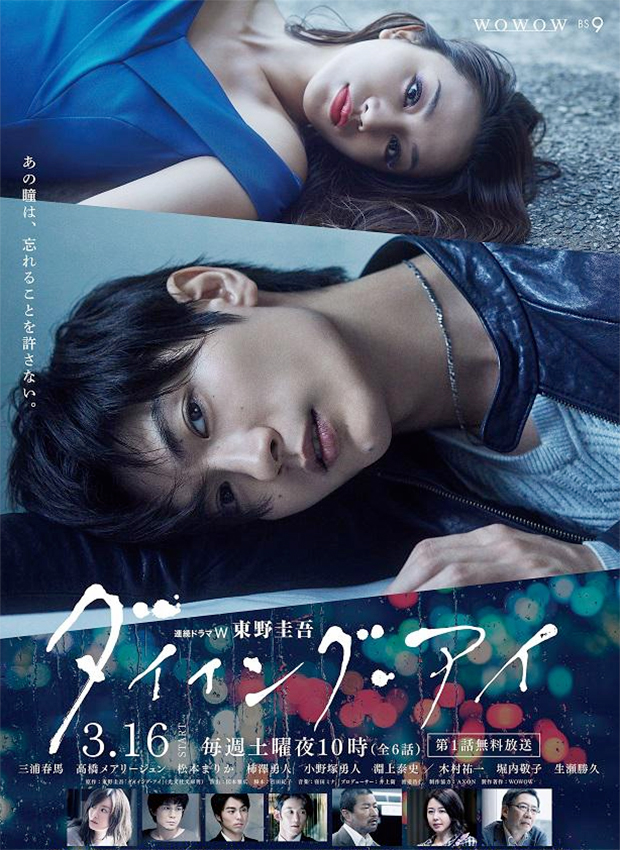 Story
One night, Amemura Shinsuke, a bartender at a Nishi Azabu bar called Myouga in Tokyo, is attacked by a male stranger and loses a part of his memories. However, he soon learns that he caused the death of a woman called Kishinaka Minae in a traffic accident one and a half years ago. And the man who came to attack him and later committed suicide, was her husband Reiji. For some reason, Shinsuke is frequently advised by the people around him that it is better not to recall bad things. He gradually begins to have misgivings about the truth of the accident. Then when Shinsuke returns to the bar on one rainy night, Ruriko, a woman in mourning clothes with a strong gaze and of unworldly beauty, shows up all of a sudden. She looks identical to Minae who died in the traffic accident. Someone, either Shinsuke’s missing girlfriend Murakami Narumi, his life’s teacher Ejima Koichi or Myouga’s proprietress Ono Chizuko, is lying. Who is trying to trap whom? The detective Kozuka Yohei begins to investigate as if motivated by the darkness of the case. From the time of Ruriko’s appearance, Shinsuke descends into a world of madness and anguish as she boldly seduces and toys with him. Does she truly exist or is she a figment of imagination conjured by a guilty conscience?

Characters
Miura Haruma as Amemura Shinsuke
A bartender who is attacked by a male stranger and loses a part of his memories. He later learns that he caused a traffic accident one year ago that resulted in a woman’s death.

Takahashi Maryjun as Ruriko/Kishinaka Minae
Ruriko: A mysterious woman who comes to the bar where Amemura Shinsuke works all of a sudden. She is bewitching and has a gaze that captivates him.

Kishinaka Minae: A piano teacher. She was the victim in the traffic accident that Amemura Shinsuke caused one and a half years ago. She was pregnant with a child at the time she died.

Matsumoto Marika as Murakami Narumi
Amemura Shinsuke’s live-in girlfriend. A hostess who works at a Ginza club. aShe is worried about Shinsuke who has lost his memories but she has a secret.

Kakizawa Hayato as Kishinaka Reiji
Kishinaka Minae’s husband who makes mannequins. He wants to take revenge on Amemura Shinsuke who caused the traffic accident that took his wife’s life.

Kimura Yuichi as Kozuka Yohei
A detective of Nishi Azabu Police Precinct. He is in charge of the assault case on Amemura Shinsuke and eventually begins to also investigate the traffic accident that happened one and a half years ago.

Horiuchi Keiko as Ono Chizuko
The proprietress of the bar Myouga where Amemura Shinsuke works. She has been acquainted with Ejima Koichi since a long time ago. After the accident, Ejima put Shinsuke in her charge.

Namase Katsuhisa as Ejima Koichi
The owner of Sirius. He runs several bars and is the benefactor who drilled all the knowledge on being a bartender into Amemura Shinsuke.

This blog contains information and musings on current and upcoming Japanese dramas but is not intended to be comprehensive.
View all posts by jadefrost →
This entry was posted in Spring 2019 Dramas, WOWOW and tagged Dying Eye, Higashino Keigo, Miura Haruma, Namase Katsuhisa. Bookmark the permalink.