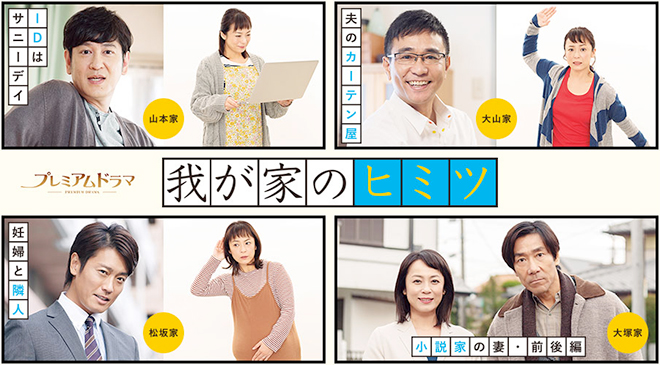 Story
An omnibus drama about four wives, one addicted to internet auctions, the others anxious about their husbands who keep changing occupations and starting businesses.

Episode 1: ID wa Sunny Day
Yamamoto Noriko (Sato Hitomi) is a full-time housewife who lives with her husband Kiyoshi (Tanaka Naoki) and their two children. One day, she tries to get rid of a picnic table that they are no longer using by putting it up for an auction on the internet at the suggestion of her younger sister. Noriko watches prospective buyers bid up the price, and feels as if she had attracted them. She gets a thrill out of the good review from the buyer and searches around the house for other items that she can put on auction. Meanwhile, Kiyoshi hears from junior colleagues at his workplace that the internet makes it easy for someone’s wife to carry on an affair and begins to doubt his wife Noriko without realising what she is slowly getting addicted to … …
Cast: Sato Hitomi, Tanaka Naoki

Episode 2: Otto no Curtain-ya
Synopsis: Oyama Haruyo (Sato Hitomi) is a passable illustrator. She gets angered by her husband Eiichi’s (Yashima Norito) declaration that he is quitting his job to start a curtain shop. It’s no wonder because he has already changed jobs six times since they got married and he was also in debt for a time. However, Eiichi disregards Haruyo’s opposition and presses on with preparations for the shop. Each time he changes job or starts a business, she feels anxious and this also has an impact on her illustrations. Then Haruyo gets an opportunity that can even be called a stepping stone for her to become a top illustrator. But … …
Cast: Sato Hitomi, Yashima Norito

Episode 3: Ninpu to Rinjin
Synopsis: Pregnant Matsuzaka Yoko (Sato Hitomi) is on maternity leave. A man and woman who appear to be a couple have moved in next door. But she begins to suspect that they are shady criminals because they did not call on her and their apartment is barely lived-in. Yoko’s husband Eisuke (Nagai Masaru) thinks that her unease is simply paranoia. She denies this but her suspicions deepen, causing a big rift between the two of them. At that very moment, Eisuke is busy with preparations as a staff of an international sports summit that is going to take place soon. His colleague Miyamoto gives advice in response to his complaints but … …
Cast: Sato Hitomi, Nagai Masaru

This blog contains information and musings on current and upcoming Japanese dramas but is not intended to be comprehensive.
View all posts by jadefrost →
This entry was posted in NHK, Spring 2019 Dramas and tagged Kishitani Goro, Sato Hitomi, Tanaka Naoki, Wagaya no Himitsu. Bookmark the permalink.