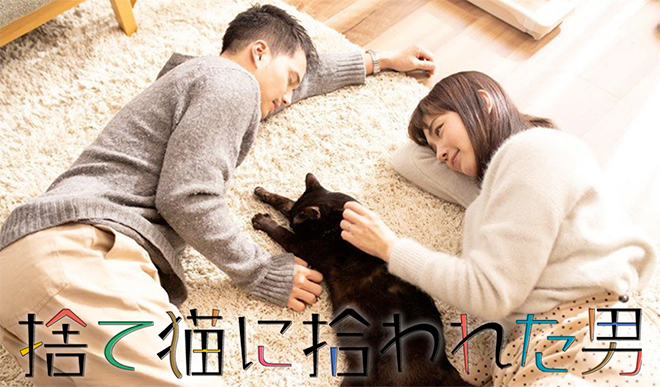 Date: From 8.00 p.m., 23 February 2019
Scriptwriter: Kobayashi Hirotoshi
Original Work: Sute Neko ni Sutewareta Otoko by Umeda Satoshi
Cast: Ichihara Hayato, Nakamura Yuri, Kakei Miwako, Okuda Erika, Hirahara Tetsu, Kitai Aya, Tsuda Kanji, Mickey Curtis
Synopsis: A man (Ichihara Hayato) works in a publishing company’s planning department. Considered a capable person by the people around him, he had been going strong at work. But the hectic pace and stress took a toll and made it hard to go to work. He was ordered by his company to take a break and has been spending each day at home. He assumes that the company has discarded him. Because of this anxiety, he even wears his employee ID card at home and has been busy creating proposals. One day, while he is sitting idly on a park bench, a black cat snuggles up to an old man (Mickey Curtis) next to him and begs for food. The old man says he is entering a home the next day. Today is his final day with the cat who prowls around the neighbourhood park. This becomes the younger man’s fateful encounter with the cat Daikichi. It seems that Daikichi used to be someone’s pet but was abandoned by its owner. With the support of his wife (Nakamura Yuri) who loves cats, he struggles hard to look after Daikichi which does as it pleases. Life with his first cat slowly begins to influence his lifestyle and slowly changes his family and social relations.
Official Website: www4.nhk.or.jp/P5551

This blog contains information and musings on current and upcoming Japanese dramas but is not intended to be comprehensive.
View all posts by jadefrost →
This entry was posted in NHK, Winter 2019 Drama Specials and tagged Sute Neko ni Hirowareta Otoko. Bookmark the permalink.