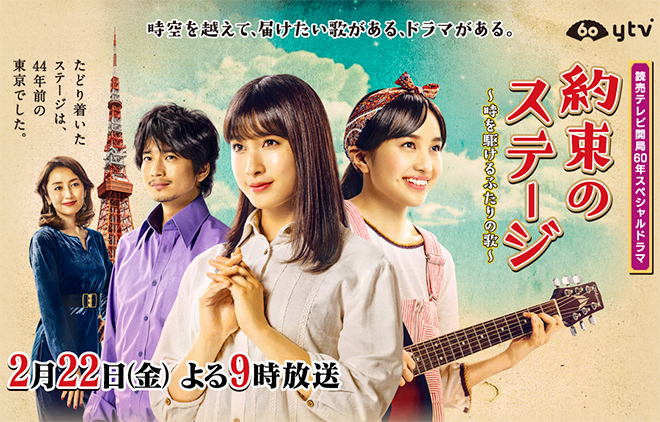 Date: From 9.00 p.m., 22 February 2019
Scriptwriter: Tokunaga Yuichi (Good Doctor, Kuragehime, Keiji Yugami)
Cast: Tsuchiya Tao, Momota Kanako, Yada Akiko, Matsumoto Toshio, Saeki Daichi, Itsuki Hiroshi, Yashiro Aki, Tendo Yoshimi, Jo Michiru, Yamamoto George, Ishiguro Ken, Masu Takeshi, Ishino Mako, Mukai Osamu
Synopsis: 20-year-old Ozawa Tsubasa (Tsuchiya Tao) has been helping out in the eatery that her mother Yukiko (Ishino Mako) runs in a port town in the Tohoku region. She loves songs and secretly wishes to become a singer. However, she is on the verge of giving up that dream since it is practically impossible. Seeing her mother keep on working despite the hardships as well as the deserted town, she doubts that dreams and wishes come true. But one day, Tsubasa travels back in time to Tokyo in the year 1975 in an unexpected way. She meets 20-year-old Ozora Tsubasa (Momota Kanako), a cheerful and positive girl with the same name and dream as her. The unsuspecting Tsubasa had left home and come to Tokyo under the mistaken impression that she was scouted by a television station. She was cheated after she arrived in Tokyo and was almost sold off to a hot spring inn together with Tsubasa. However, when the two of them sing the song Beni at a bar run by Takahara Beniko (Yada Akiko), they are told by a man Tsushima Koichiro (Mukai Osamu) that he will make them stars. Tsushima used to be a singer but only had one successful song. He is deeply in debt and is now the underling of a small-time gangster Nezu Mitsuo (Matsumoto Toshio). Realising that the two girls have singing talent, he decides to use them to make money. Tsubasa and Tsubasa perform on the audition programme called Zennippon Kayou Senshuken and set their sights on making their debut as singers but … …
Official Website: www.ytv.co.jp/yakusoku

This blog contains information and musings on current and upcoming Japanese dramas but is not intended to be comprehensive.
View all posts by jadefrost →
This entry was posted in NTV, Winter 2019 Drama Specials and tagged Ishiguro Ken, Mukai Osamu, Tsuchiya Tao, Yakusoku no Stage. Bookmark the permalink.