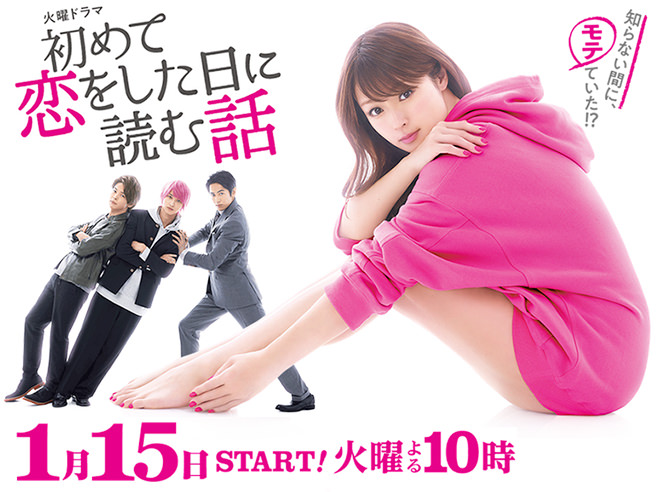 Story
32-year-old Harumi Junko has nothing going right for her. She failed the entrance exam for the prestigious Tokyo University, failed in job hunting and also failed in dating even after signing up with an online matchmaking service. She has lost all hope and motivation, and this could get her fired from the low-ranking cram school where she works as a teacher. However, Junko’s life begins to change when three different men suddenly enter her life. Her handsome and capable cousin Yakumo Masashi, who is a Tokyo University graduate and employee of a trading company, has a secret crush on her. However, the very obtuse Junko is completely unaware of his feelings. One day, a pink-haired delinquent high school student named Yuri Kyohei comes to Junko’s cram school to ask for her help to get into Tokyo University. This seems like an impossible challenge since students at his school are considered dropouts and she herself failed the entrance exam. She rejects him. Junko also finds out that Kyohei’s form teacher, Yamashita Kazuma, was her high school classmate and had once asked her out. With their appearance, Junko begins a battle to get her life on track.

Characters
Fukada Kyoko as Harumi Junko
A teacher at a third-rate cram school. She failed the entrance exam for Tokyo University, failed in job hunting and also failed in dating. She has been living on autopilot since her dreams were shattered. Her father is a Tokyo University graduate and board member of a major manufacturer while hr mother is a graduate of a private university for girls from well-off families. So she set her sights on Tokyo University from a young age. Her academic results were good and she always topped her cohort until high school. She scored top marks in a mock Tokyo University exam. But when the time came to take the actual exam, she failed. As a result, she lost sight of her goals in life, having lived to qualify for Tokyo University and measure up to her mother’s expectations. She has never experienced true love and her romantic skills are at the bottom of the heap. She meets Yuri Kyohei, a second-year high school student in an unexpected turn of events, and is struck by his free spirit. Together, they set their sights on Tokyo University … …

Nagayama Kento as Yakumo Masashi
Harumi Junko’s cousin. They were competitive in their studies since childhood and attended the same school until high school. He studied for the entrance exam and impressively qualified for Tokyo University. Then graduated with straight As and even got a job at a major trading company. He has now been assigned to the energy division which is the company’s star performer. He has good looks and knows how to swim with the tide. He is popular with girls because he excelled in both studies and sports. They would come up to him so he is not accustomed to being the one to get the attention of someone he truly likes and is actually terrible at romance. He has had a one-sided love for Junko since junior high school. Although he has made several moves throughout the years, the oblivious Junko has expertly let this pass. He understands her the best because he has observed her closely.

Yokohama Ryusei as Yuri Kyohei
A pink-haired, delinquent second-year high school student who attends a school where the students are considered dropouts. His father is a high-ranking official with the Ministry of Education, Culture, Sports, Science and Technology. After his mother’s death, his father focused on work and he grew up in a well-to-do family without love. While he does not talk much and seems cold because he has no interest in anything, he is compassionate and 強い意志を秘めている。He regards adults coldly and thinks the world is full of these boring people. He has given up on his future. But his encounter with Harumi Junko whom his father spoke sharply to, gives him a jolt and he sets his sights on the Tokyo University entrance exam together with her. Despite being a person of few words, he possesses perceptiveness and says insightful things at times. His quiet love begins to change Junko who has only regrets and never known love.

Nakamura Tomoya as Yamashita Kazuma
Harumi Junko’s former high school classmate. Yuri Kyohei’s form teacher. He was the only one in Junko’s life who confessed his feelings to her. Back in high school, he became a delinquent in an act of rebellion against teachers and was marked by them. He meets Junko, who has ended up teaching Kyohei, again as adults. He finds himself attracted to her once more as he sees her diligence in helping Kyohei and usual obtuseness with regard to romance. He has in a way mellowed because of wrongdoings, setbacks and experiences. He is a popular guy who laughs self-deprecatingly, does not try to act cool or exaggerate, and can nonchalantly pay compliments to women.

Adachi Yumi as Matsuoka Miwa
Harumi Junko’s childhood friend. They attended the same school until junior high. She is now the owner of a hostess bar. Although she has the disposition of an older sister, she thinks Junko is the one who is truly a strong, handsome woman. She gives advice on Junko to Yakumo Masashi and occasionally roots for him. However, when she realises Yuri Kyohei’s feelings, she seems to be fair in her support for both men, but also just amused.

Ishimaru Kenjiro as Harumi Tadashi
Harumi Junko’s father. A former engineer who graduated from Tokyo University. He is now a board member of a major manufacturer. A good-natured and tolerant man, he is the family’s breadwinner and to Junko, the one who understands her the most.

Dan Fumi as Harumi Shinobu
Harumi Junko’s mother. A woman obsessed with her daughter’s education, she was proud of her daughter who was the trophy child and raised her to qualify for Tokyo University. She restricted her hobbies, television, manga as well as romance – everything that would get in the way of the exams. She controlled her daughter’s entire schedule, chose the books which she read and even created her study plans. However, it was more difficult for her to accept the failed entrance exam than Junko herself, failed in job hunting and still has not married, and she feels humiliated that Junko also failed in getting a job and is still not married.

This blog contains information and musings on current and upcoming Japanese dramas but is not intended to be comprehensive.
View all posts by jadefrost →
This entry was posted in TBS/MBS, Winter 2019 Dramas and tagged Adachi Yumi, Fukada Kyoko, Hajimete Koi o Shita Hi ni Yomu Hanashi, Nagayama Kento. Bookmark the permalink.