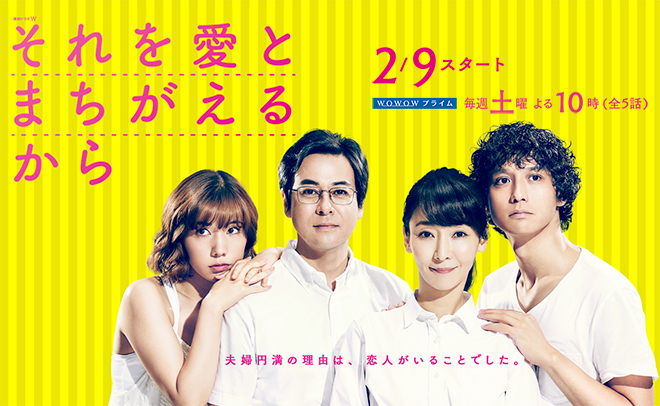 Story
Ito Kaya is a full-time housewife and has been happily married to her husband Tadashi for 15 years. However, they have not had sex for a long time. One morning, Kaya asks if he has a lover, and learns that he knows she has a lover too. This conversation leads to no definite conclusion besides a reluctant acknowledgement of each other’s lovers. In fact, Kaya has been having an affair with manga artist Hoshino Seiichiro. Meanwhile, she visits a chiropractic clinic. During a session with the chiropractor Osaka Akane, Kaya cries in spite of herself after Akane tells her that she should say it hurts, if it hurts. Their interactions grow after that. However, Akane is Tadashi’s lover. Through an unexpected turn of events, all four of them end up becoming acquainted. What will happen to this four-sided relationship between the troubled couple and their lovers?

Characters
Inamori Izumi as Ito Kaya
A full-time housewife who is happily married to her husband Tadashi. She pays too much attention to the people around her and has a tendency to bottle up her true feelings. She is bothered that they have not been having sex but thinks she should be grateful for her current life. She denies her frustration with Tadashi and seriously turns to an affair with her ex-boyfriend Hoshino Seiichiro. At times she ends up saying or doing something off the wall.

Suzuki Kosuke as Ito Tadashi
Ito Kaya’s husband. A section manager of a large supermarket, he is a salaryman who has no hope of getting promoted. Although he is easygoing and good-natured, he can be oblivious to the fact that this can go the wrong way and hurt the people close to him. He has been going out with the much younger Osaka Akane in his quest for comfort.

Naka Riisa as Osaka Akane
A chiropractor who is in a relationship with Ito Tadashi. She is candid and masculine. She seems to be chill about marriage, but hides a fear of genuinely falling for someone.

Ando Masanobu as Hoshino Seiichiro
Ito Kaya’s lover. A popular artist of manga for girls. His pen name is Tono Yukie. They became acquainted while in university and developed a relationship after they happened to meet again a few years back. He is scruffy and brutally honest. However, he is actually a sensitive person.

This blog contains information and musings on current and upcoming Japanese dramas but is not intended to be comprehensive.
View all posts by jadefrost →
This entry was posted in Winter 2019 Dramas, WOWOW and tagged Ando Masanobu, Inamori Izumi, Naka Riisa, Sore o Ai to Machigaeru kara, Suzuki Kosuke. Bookmark the permalink.