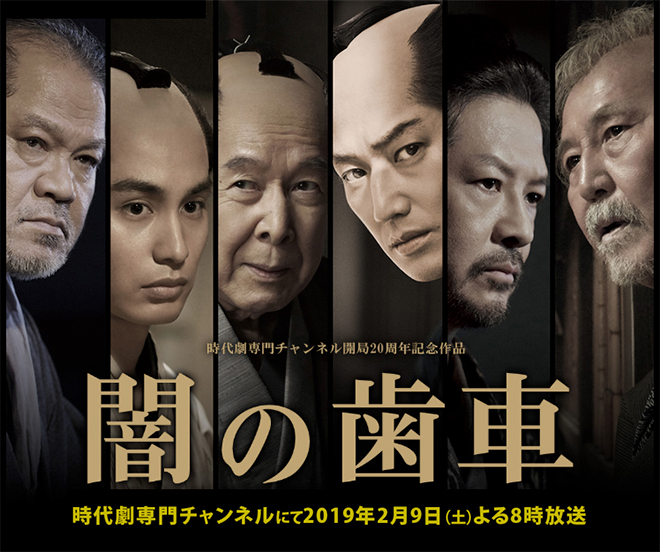 Date: From 8.00 p.m., 9 February 2019
Original Work: Yami no Haguruma by Fujisawa Shuhei
Scriptwriter: Kaneko Narito (Crossroad Series, Tsuma wa Kunoichi Series, Sarutobi Sansei)
Genre: Period suspense
Cast: Eita, Ogata Naoto, Daichi Yasuo, Nakamura Aoi, Renbutsu Misako, Takahashi Kazuya, Ishibashi Shizuka, Tsukayama Masane, Nakamura Katsuo, Hashizume Isao
Synopsis: Dusk is the moment when people’s faces blend into darkness and silence fills the streets. During the Edo Period, people greet this time of day with fear as evil spirits of rivers and mountains are said to roam. It is early autumn in the Fukagawa area in Edo. Sanosuke (Eita) earns his bread and butter in this shadowy world. One day, he meets a mysterious man Ihei (Hashizume Isao) at his regular haunt, Okame. Ihei says he has a scheme to get rich quickly and asks if Sanosuke is game. Sensing something dangerous about Ihei, Sanosuke stalks out. Just about the same time, he unexpectedly ends up living with a woman called Okumi (Ishibashi Shizuka). Hoping to have a future with her, Sanosuke eventually gives into Ihei’s urging. However, the men who become accomplices are Iguro (Ogata Naoto), a masterless samurai with a sickly wife; Sentaro (Nakamura Aoi), a young gentleman from a merchant family; and Yaju (Daichi Yasuo), a white-haired old man with a criminal record. While they have always seen each other at Okame, they have never spoken. All four are complete novices at burglary. Then there is Ihei, the professional. Their target is 700 ryo which lies in a certain merchant house. At dusk, the gears begin to turn. However, the women around them also get involved and their lives begin to quietly fall apart.
Official Website: yaminohaguruma.jp

This blog contains information and musings on current and upcoming Japanese dramas but is not intended to be comprehensive.
View all posts by jadefrost →
This entry was posted in BS Sky Perfect, Fuji TV, Winter 2019 Drama Specials and tagged Eita, Hashizume Isao, Nakamura Aoi, Renbutsu Misako, Yami no Haguruma. Bookmark the permalink.