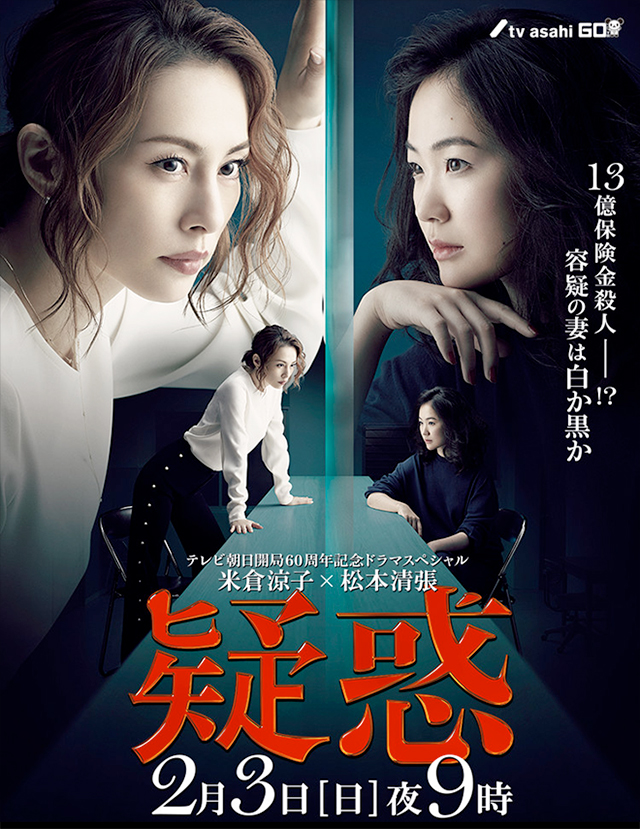 Date: From 9.00 p.m., 3 February 2019
Scriptwriter: Takeyama Yo (Kokuhatsu, Yakkou no Kaidan)
Original Work: Giwaku by Matsumoto Seichou
Cast: Yonekura Ryoko, Kuroki Haru, Yo Kimiko, Itao Itsuji, Nagayama Kento, YOU, Katsumura Masanobu, Hotta Akane, Ibu Masato, Hiraizumi Sei, Manda Hisako, Nakamura Baijaku, Tsugawa Masahiko
Synopsis: Sahara Takako (Yonekura Ryoko) is a lawyer who specialises in civil cases. She hates to lose and will use whatever means necessary to pursue the truth. Despite her competence, she is mocked as a rotten lawyer for defending companies that exploit its employees and winning many of these lawsuits. One day, Takako gets an unexpected request from a veteran lawyer Harayama Masao (Tsugawa Masahiko). He would like her to take over the defence of a woman because he is in poor health and needs to be hospitalised. This woman is Shirakawa Kumako (Kuroki Haru) who has been in the public eye. Called “Oni-kuma” by the public which is a play on her maiden name Onizuka, she faces charges of killing her husband Fukutaro (Nakamura Baijaku), the owner of an established Atami restaurant, for insurance money. The case happened on a day of heavy rain at the dock of Atami Port in Shizuoka Prefecture. Kumako and Fukutaro went out for a drive but their car plunged into the sea. He could not swim and drowned inside the car while she managed to get out and survived. Kumako claims this was an accident caused by his driving error. But there is cause to suspect foul play. Besides the discovery of a spanner inside the car, she has spread a video of Fukutaro’s violence against her through social media for some reason. The people around her also condemn his routine abuse and the situation looks dire for Kumako who has four prior convictions of assault, violence and extortion. Even so, Kumako continues to maintain her innocence. The police eventually resort to arresting her on a separate charge. Because of that, Kumako fabricates a story about being suddenly attacked and makes a fuss. When Takako is contacted and rushes over, Kumako feigns gratitude. However, the moment Takako asks point-blank whether she killed Fukutaro, she clams up. There is one question in Takako’s mind. She wonders whether the inscrutable Kumako is really the villainess that the public has made her out to be. In order to get to the bottom of the truth of the case and Kumako’s nature, Takako gathers information from gossip writer Akitani Moichi (Itao Itsuji) and other sources. Meanwhile, chief public prosecutor Oda Hideko (Yo Kimiko) who wants to nail Kumako at all costs, schemes against Takako.
Official Website: www.tv-asahi.co.jp/giwaku_yonekura