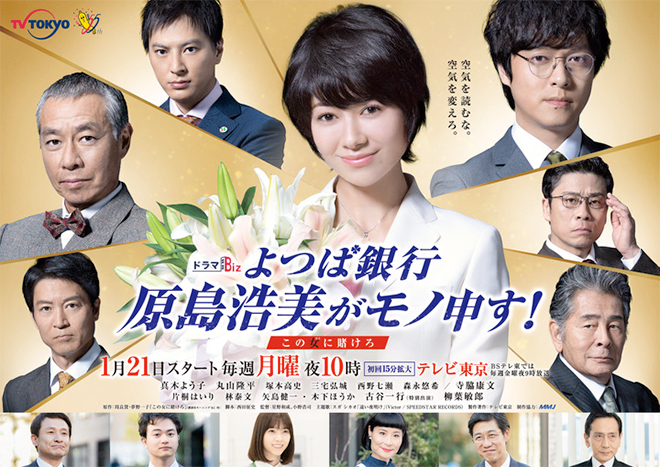 Story
Hatoyama Hideo, the president of Yotsuba Bank, announces a project on women in prominent positions, to proactively promote the appointment of female bank employees. Harashima Hiromi is selected to head the Corporate Sales Division at the struggling Taito bank branch as part of this project. But this is the agenda of Shimazu Masahiko, the deputy president who is watching for an opportunity to seize Hatoyama’s position. Hiromi has been working at the headquarters of the bank ever since she joined it straight out of college. However, she has a strong sense of justice and has no qualms using her signature phrase “With all due respect, may I …” to reason with anyone. As a result, Hiromi is rumoured to be a troublemaker and ended up causing an incident three years ago which led to her secondment to an affiliate company. The arrival of a female division manager gets an unenthusiastic response from the employees of the Corporate Sales Division, particularly Kato Akihiko, who was a candidate for the position. Hiromi has been ordered to turn the Taito bank branch around. As a bank employee who puts customers first, Hiromi tackles her mission with bold ideas and energy.

Characters
Maki Yoko as Harashima Hiromi
She has been working at Yotsuba Bank’s headquarters ever since she joined it straight out of college. However, she has a very strong sense of justice and caused an incident three years ago. As a result, she was seconded to an affiliate company. This time, she is selected to head the Corporate Sales Division at the struggling Taito bank branch as part of the bank’s project on women in prominent positions, and ordered to turn it around.

Maruyama Ryuhei as Kato Akihiko
The ace of the Corporate Sales Division at Yotsuba Bank’s struggling Taito branch, and the only one who has been putting in effort. He is jealous that Harashima Hiromi has become the head of the division even though he has been here longer and clashes with her. But in the end, he gives her advice and interferes in all sorts of things.

Terawaki Yasufumi as Yamada Taihei
The manager of Yotsuba Bank’s Taito branch. An inscrutable man. He has a poker face all the time. His priority is the survival of the bank branch.

Furuya Ikkou as Hatoyama Hideo
He is the most powerful man as the president of Yotsuba Bank. He is well-connected with the Financial Services Agency. Because he has a conservative management style, he is at odds with Shimazu Masahiko, the deputy president.

Yanagiba Toshiro as Shimazu Masahiko
The deputy president of Yotsuba Bank. He is a very self-conscious tactician. He opposes the management style of the conservative Hatoyama Hideo and openly covets his position. Because of his global perspective, he has set his sights on making Yotsuba Bank, Asia’s number 1 bank. He actually has a connection to Harashima Hiromi’s past … …