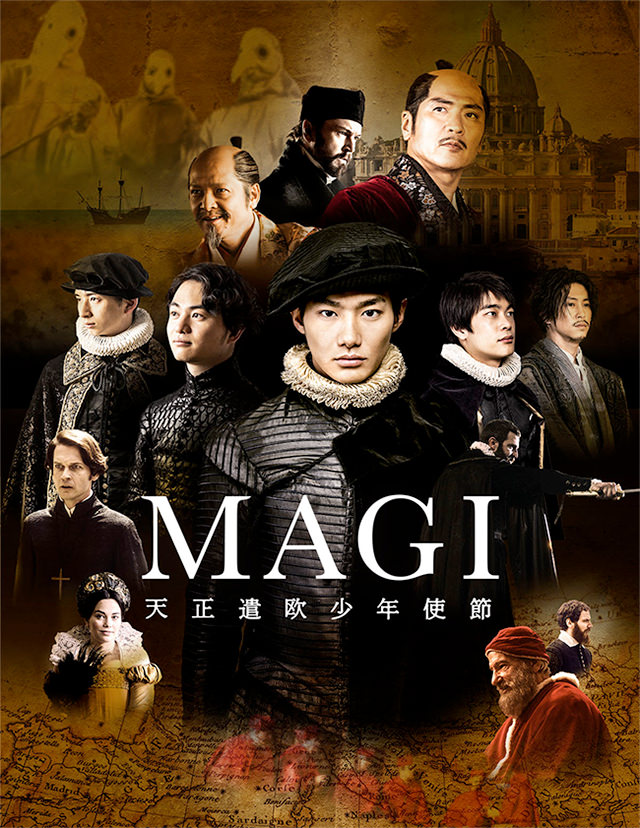 Story
During the Sengoku Period, an Italian Jesuit missionary Alessandro Valignano arrives in Nagasaki to oversee the spread of Christianity to the Far East. The Jesuits have gained followers mainly in Kyushu ever since Francis Xavier visited Japan as a missionary and introduced the religion. Valignano conceives a grand scheme to expand the Jesuit mission. It is to build seminaries all across Japan and bring outstanding youths who have studied there to the Vatican and present them to the pope. Since a large amount of funds have been drawn from the Vatican to make Japan a Christian nation, four youths are chosen to make a story written in the bible about the legend of the three wise men, who travelled from the East bearing gifts when Jesus Christ was born, a reality. They are Ito Mancio, who was picked up by a church and works as a servant; the timid but kind-hearted Nakaura Juliao; Hara Martinho, the smartest in the seminary; and Chijiwa Miguel, the second son of a feudal lord. The four of them have an audience with Oda Nobunaga and receive the order to journey across the seas to unknown countries. Oda wants to signal that Japan is the East while Valignano intends to gain support for the Jesuit mission in the East. The youths become entangled in the ulterior motives of the adults as they set off on a great adventure. Led by a priest called Mezquita who belongs to the anti-Valignano faction, they leave Nagasaki in the company of Dourado, a footman with a Japanese mother and Portuguese mother. The voyage will take them two and a half years, and they will have to overcome a variety of challenges before reaching Europe. Their journey takes them from Lisbon in Portugal, to Madrid in Spain and then Italy. It is the period of the Renaissance and religious transformation in Europe. In Florence, they are shocked and inspired by the culture. They dance with Bianca at a ball hosted by the de’ Medici family and finally have an audience with Pope Gregorius XIII at the Vatican, the headquarters of the Roman Catholic Church. However, little did they realise that what awaits them upon their return to Japan after their spectacular mission is the expulsion of the Jesuits and suppression of Christianity by Toyotomi Hideyoshi who has become the supreme ruler of Japan.

Characters
Nomura Shuhei as Ito Mancio
He fell from a castle and barely escaped alive. He was taken in by a church when he was begging for food. He regards Christianity with a mixture of revulsion and interest.

Morinaga Yuki as Nakaura Juliao
A young man who is physically weak but kindhearted. He worries about travelling and leaving his mother behind alone. The journey makes him aware of his strong religious devotion.

Inowaki Kai as Hara Martinho
He is smart and good at languages. He is rational and modern in his outlook. He later brings a letterpress printing machine back to Japan.

Ogata Atsushi as Chijiwa Miguel
The second son of the lord of Chijiwa Castle. He has good pedigree, an honest personality and also a strong sense of justice. It is impossible for him to overlook any wrongdoing. He is the only one who later leaves the Jesuits.

Sano Gaku as Dourado
He has a Japanese mother and Portuguese mother. He left Japan and had been working as a footman at the Jesuit mission in Goa, India but accompanies the youth on their journey.

Eric Bossick as Alessandro Valignano
The Area Inspector of the Jesuit mission to India. He dreams of connecting the West with Japan and comes up with the idea of youth envoys.

Bob Werley as Mezquita
A Jesuit missionary who accompanies the four youths on their journey to Europe. He has mixed feelings towards Alessandro Valignano.

Ogata Naoto as Toyotomi Hideyoshi
He came into power after the death of Oda Nobunaga, rising to the top despite his origins as the son of a farmer. Unlike Nobunaga, he is deeply suspicious of Christianity.

Kikkawa Koji as Oda Nobunaga
The supreme ruler after the war, he showed goodwill toward the Jesuits who were doing missionary work in Japan. He loses his life just before unifying the country as a result of treachery by his general Akechi Mitsuhide.

Simon Andreu as Pope Gregorius XIII
The 226th pope. He is best known for adopting the Gregorian calendar, which remains in general use today.

This blog contains information and musings on current and upcoming Japanese dramas but is not intended to be comprehensive.
View all posts by jadefrost →
This entry was posted in Amazon Prime, Winter 2019 Dramas and tagged Kikkawa Koji, MAGI, Nomura Shuhei. Bookmark the permalink.