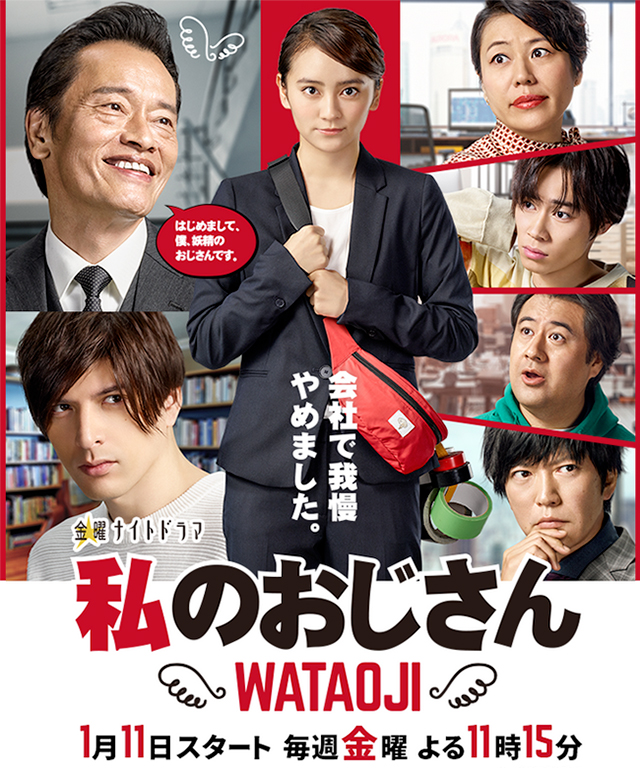 Story
Ichinose Hikari is desperate. She has not been able to secure a job and has been dumped by her boyfriend who had promised marriage. She finally gets a job as an assistant director at Teledream, a production company, and is assigned to a variety programme, Genkai Max ~ Anata mo Kimi mo Yattemi!!! famed for its very punishing locations. Hikari immediately heads to the set according to the sloppy directions of producer Izumi Masaya. However, she encounters a very unreasonable chief assistant director Debuchi Teruhiko, assistant director Kujo Hayato who uses the reform of working practices as a shield, domineering assistant producer Baba Momoka, and the capable but very awful programme director Chiba Jin there. Hikari keeps getting unrealistic demands, such as being suddenly told to search for 1000 kinds of red peppers, foisted on her and chewed out no matter how hard she works. One day, she rushes into a toilet cubicle, crying that she will quit when she hears a voice say, “Shall I comfort you?” She fearfully turns around to see a smiling middle-aged man sitting on the toilet bowl. Hikari screams that he is a pervert, a stalker. But the man introduces himself as a sprite. From that day on, this sprite whom Hikari can only see, sticks to her all the time – at work and even when she is off work. He grumbles and complains freely about everything from the side, and bluntly asks why she laughs when she is unhappy. As he voices her own thoughts and true feelings (naturally no one is able to hear them), Hikari gradually starts to feel invigorated by his presence.

Characters
Okada Yui as Ichinose Hikari
A new assistant director who works for the variety production company Teledream. She was quickly put in charge of Genkai Max ~ Anata mo Kimi mo Yattemi!!!, a variety programme with punishing locations as the main attraction, after joining the company. She was dumped by her boyfriend who had promised marriage, and was unemployed because she never looked for a job. She somehow finally lands a job at Teledream in December. However, she cannot bring herself to tell her parents and friends about her job because of her stupid pride. There is virtually nothing feminine about her. The house that she has started living in is like a dump and she is also unable to cook for herself. One day, she is able to see a mysterious middle-aged man and he has been haunting her since then. She is always smiling and cheerful. She bottles up what she truly wants to say to avoid causing trouble and throws herself into work. However, she slowly begins to show a hidden “spiteful” side under his influence?

Endo Kenichi as Ojisan
A middle-aged man who proclaims himself a sprite. He is only visible to Ichinose Hikari who suddenly starts to see him one day. He has an extremely bad personality and makes very scathing comments, dissing people and complaining incessantly every day. He would occasionally get back at jerks if he feels like it. One may think he is Hikari’s ally but that is not really the case. She is also mercilessly dissed by him. He loves giving advice on romance although he just ends up getting in the way. His true identity is a mystery. He wears a find three-piece suit, and appears in unexpected places and at unexpected moments. People have often heard the urban legend of a small middle-aged man but this man is life-size. If someone calls him a ghost, he vehemently denies it because he is a sprite.

Shirota Yu as Chiba Jin
The director in charge of Teledream’s Genkai Max ~ Anata mo Kimi mo Yattemi!!!. He is obstinate, sarcastic and awkward. He is always ready to hit people on the head with the script. His outfits are big and always dull, and he keeps his hair long. If he walks on a street, he looks practically like a suspicious person. He is passionate about creating interesting shows and will never compromise. On the contrary, there are also occasions when he gets on the wrong side of the people around him for being troublesome. He is not very good at developing personal relationships and because he speaks his mind, he is believed to lack tact. To avoid being judged by management, he does not want them to remember much. He cannot help himself when it comes to women and will kiss anybody.

Aoki Sayaka as Baba Momoka
The assistant producer of Teledream’s Genkai Max ~ Anata mo Kimi mo Yattemi!!! She is the scary senior female employee who supervises juniors in a domineering fashion. She typically comes to work in the afternoon after buying coffee. Because she is proud that she has given up her womanhood to live for work, she will never forgive an assistant director who comes in skirts or short pants. However, having also thrived after going through a lot in the industry, it is too late to change her lifestyle. Although she believed that she would not become such a senior female employee, she is rushing headlong in that direction without realising it or not … …

Tanabe Seiichi as Izumi Masaya
The handsome producer of Teledream’s Genkai Max ~ Anata mo Kimi mo Yattemi!!! He is stylish and positive. He says questionable things with a smile such as “Let’s all do interesting things”. However, he has the mentality of a salaryman and will immediately follow orders from management. He is strict about compliance and viewership ratings. What he says the day before can often change all of a sudden the next day. At times, it would even seem to the people around him that he is irresponsible or has no love for a programme. His true feelings are hard to read and he has an unnecessarily bright and easygoing personality. He tends to get into arguments with Chiba Jin who is the exact opposite of him.

This blog contains information and musings on current and upcoming Japanese dramas but is not intended to be comprehensive.
View all posts by jadefrost →
This entry was posted in TV Asahi, Winter 2019 Dramas and tagged Endo Kenichi, Shirota Yu, Tanabe Seiichi, Watashi no Ojisan ~ Wataoji. Bookmark the permalink.