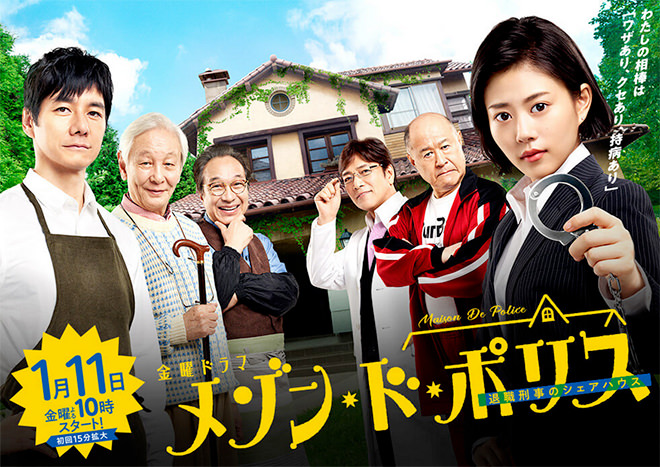 Story
Makino Hiyori, a rookie detective at Yanagimachi Kita Police Precinct, has her prayers answered when she is assigned to the Criminal Affairs Division in her second year. One day, a video of a person being burnt alive within the precinct’s jurisdiction is uploaded onto a website. The investigation task force believes this is the act of a copycat criminal mimicking a murder which took place five years ago. Bursting with enthusiasm, Hiyori visits Maison de Police, a shared house in an upscale residential area, in search of clues. She is here to hear from Natsume Soichiro, a former detective of the First Investigative Division who was in charge of the case called the Death Dance. Only retired police officers live communally in this old Western-style home owned by Date Aritsugu, a former top official of the Tokyo Metropolitan Police Department. There is Sakota Tamotsu, who used to be a hot-blooded police precinct detective; Todo Masato, a former professional of the crime lab; and Natsume, the handyman under Takahira Atsuhiko who worked in general affairs and is now in charge of all the housework as the caretaker. Hiyori has come to talk to Natsume but things proceed at the pace of Todo and Sakota without Natsume spilling the beans. Hiyori is flustered that these old man who are now ordinary civilians are trying to interfere in the investigation. But Date just says he will speak with the top. That is how Hiyori begins a strange investigation meeting with Takahira, Todo, Sakota and Date. Despite their longsightedness, back problems and high blood pressure, their investigation skills are top notch. Hiyori pursues the case with these idiosyncratic old men but … …

Characters
Takahata Mitsuki as Makino Hiyori
Her father fell to his death at a construction site 20 years ago when she was six and her mother died of illness seven years ago. She hopes to be assigned to the Criminal Affairs Division since the time she worked at a police box and has been working hard. One year ago, her wish finally came through and she was posted to Yanagimachi Kita Police Precinct’s Criminal Affairs Division. One day, a person is burnt to death in a bizarre case. She visits Maison de Police where retired police officers live at the instructions of her superior. She meets old men there and they end up investigating the case together … …

Nishijima Hidetoshi as Natsume Soichiro
A former detective of the Tokyo Metropolitan Police Department’s First Investigative Division. A fastidious person and a perfectionist, he never cuts corners or makes compromises. He is inflexible and awkward. When it became difficult for him to stick to his own ideals in the police organisation, he resigned. After that, he got a job at a security company but could not get used to it. He received an offer from Date Aritsugu and came to live as Maison de Police’s handyman. One day, Makino Hiyori visits and he throws himself into the investigation … …

Kohinata Fumiyo as Takahira Atsuhiko
An old man who is unable to read situations. Although he is in charge of Maison de Police, he does not live in the house and commutes from his home. He is married with a wife and daughter, and is good at domestic things. He plans the meals and delights in researching dessert recipes while taking care of not just the household chores but also looking after the health of the old men. He trains Natsume Soichiro in housework. He has been a fan of mystery novels since his school days. It was his dream to become a detective, but because his career ended in areas far from investigation such as general affairs, human resources and public relations, he has no field experience. However, a part of him cannot get over his longing for investigations. At that moment, Makino Hiyori visits Maison de Police.

Noguchi Goro as Todo Masato
He is pretentious and loves women. He looks for opportunities to make a move on a woman and has been divorced three times. He claims that he is drawn to things that he does not understand. He belonged to the Tokyo Metropolitan Police Department’s crime lab and was its ace at that time. After retirement, he came to Maison de Police at the invitation of Date Aritsugu who is indebted to him. he has research and analysis equipment in his own room.

Kadono Takuzo as Sakota Tamotsu
He joined the Tokyo Metropolitan Police Department after graduating from high school. He worked at a police box and police precinct’s Community Police Affairs Division before he was assigned to the Criminal Affairs Division. After that, he remained in the field for almost 40 years and worked his way up until his retirement. He was invited to join the First Investigative Division on numerous occasions but he stuck with the precinct. He is an old-fashioned, strait-laced old man. Following his retirement, his wife of more than 30 years broached a divorce. After that, he was invited by his benefactor Date Aritsugu and came to live in Maison de Police. Makino Hiyori’s appearance at the house reignites his detective spirit.

Kondo Masaomi as Date Aritsugu
A former top official of the Tokyo Metropolitan Police Department, and a man of integrity. After graduating from the law faculty at Tokyo University, he joined the Tokyo Metropolitan Police Department. He held positions in every prefectural police from division chief to prefectural police chief. Although he was a police official, he always took the lead in investigations at crime scenes and enjoyed the confidence of the detectives. He invites Makino Hiyori into Maison de Police and helps in the investigation.

This blog contains information and musings on current and upcoming Japanese dramas but is not intended to be comprehensive.
View all posts by jadefrost →
This entry was posted in TBS/MBS, Winter 2019 Dramas and tagged Kohinata Fumiyo, Maison de Police, Nishijima Hidetoshi, Takahata Mitsuki. Bookmark the permalink.