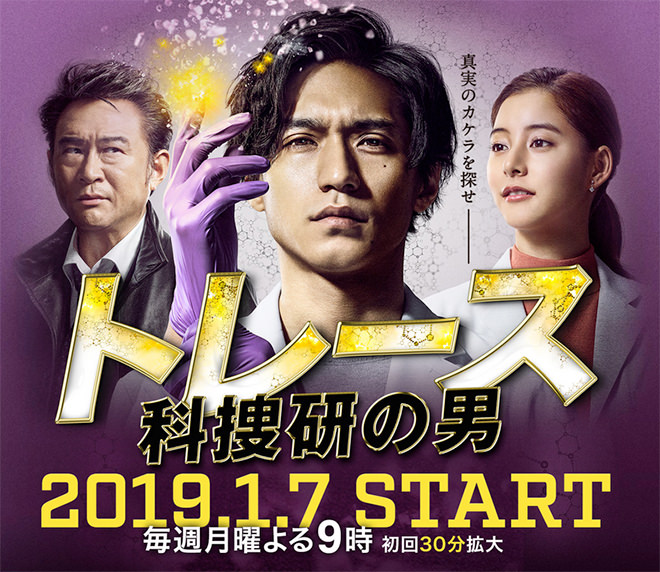 Story
Forensic researcher Mano Reiji, who belongs to the Tokyo Metropolitan Police Department’s crime lab, experienced a gruesome case in the past. He has a different viewpoint from others and only believes in the objective truth obtained through lab results. He relentlessly rebuts even detectives, find the shards of truth buried in darkness, and reveals the thoughts and regrets of dead victims, which leads him to solve difficult cases. While his abilities are highly regarded by the people around him, he does not fit in at the crime lab because he is cold, uncooperative and will not get involved with people more than is needed. One day, Mano’s boss Kaizuka Ritsuko introduces newcomer Sawaguchi Nonna to Sagara Kazuomi, Ichihara Hiroshi, Mizusawa Eiri and other forensic researchers. Nonna did gene research at graduate school and was asked by Ritsuko, who is an alumni of the university, to join the crime lab. However, she cannot hide her bewilderment about her involvement in murder cases which she imagined to be something far removed from this world. Then detectives Toramaru Ryohei and Inose Yuto from the First Investigative Division arrive with forensic officer Okita Toru. They came to hear the lab results on a severed left hand found at an event. Mano who was in charge tells them that diatom and more than 20 times the normal level of manganese was detected from deposits. Hearing this, Toramaru decides to head over to Tamagawa immediately. Mano says there is no point searching the area. However, Toramaru glares at him for daring to interfere in the course of the investigation. Mano suddenly starts preparing to go to the scene and suggests Nipparagawa which is a special diatom habitat with the site of former manganese mine in the area. Some researchers criticise Mano for being out of line. But Ritsuko shrugs it off and instructs Nonna to accompany Mano and learn about him. The two of them reach Nipparagawa and soon discover a dismembered female body. There is also a flower half buried in the ground. According to the results of the autopsy, the body was cut into 10 parts and the cause of death was from loss of blood from a stab to the heart with a knife. The time of death is estimated to be late at night four days ago. There are also signs that the victim was constantly abused when she was alive. Meanwhile, a woman called Igarashi Chizuru who might be the victim’s mother, visits the police precinct with her second husband Yasunobu who is a well-known commentator on education … …

Characters
Nishikido Ryo as Mano Reiji
A forensic researcher at the Tokyo Metropolitan Police Department’s crime lab. He has a vast knowledge, good judgment and a unique point of view which is different from others. He is highly valued for his ability. On the other hand, he is an outcast in the crime lab because he is cold and uncooperative. He keeps subjectivity and speculation out of cases and analyses them with the conviction that “lab results are the truth”. He shows disgust towards the people around him who talk as if subjectivity is truth as well as the mass media for sensationalising cases. He will use every possible method to analyse even incidents or things that the police have assessed are unrelated to a case, until he gets results that convince him. He has been searching for the truth of a grisly case that he experienced as a child. Although he is unable to open his heart to other people and has built a wall around him, he slowly begins to change after meeting Sawaguchi Nonna.

Araki Yuko as Sawaguchi Nonna
A new researcher at the Tokyo Metropolitan Police Department’s crime lab. She had been researching genes at graduate school but was bothered that she could not produce outstanding results. That was when she was invited by Kaizuka Ritsuko, the head of the crime lab who is an old girl of the university, to join her. And so, she quit graduate school. She feels disconcerted to be involved in murder cases which she had regarded as events far removed from this world, and wonders whether she is suited for the role. However, she empathises with the victims and their surviving family members, and feels a strong desire to uncover the truth. Although Mano Reiji’s actions get the better of her, she receives a big stimulation which she has never had in her life. She worries about the weight of responsibility should she overlook something or make a mistake. But she is encouraged by Mano’s words that their job is to find out the last thoughts of victims, and she begins to grow as a member of the crime lab as she attempts to discover the truth hidden in cases.

Yamazaki Shigenori as Sagara Kazuomi
An exemplary researcher at the Tokyo Metropolitan Police Department’s crime lab who puts emphasis on getting the job done efficiently. He is ambitious and hates Mano Reiji who likes to go beyond the remit of their job and act on his own. He regards him as a rival.

Koyuki as Kaizuka Ritsuko
The young and beautiful head of forensics at the Tokyo Metropolitan Police Department’s crime lab. She is respected by the investigators. However, she is still single. She may appear calm and collected but she is actually a caring person. Although Mano Reiji disregards the rules and runs wild in his pursuit of the truth, she tolerates his behaviour and watches over him. He has a tendency to be a loner so she instructs him to guide the newcomer Sawaguchi Nonna and hopes for their growth. In fact, she has some connection to Mano’s past and understands his pain. She comes to play a key role in finding out the truth.

Chihara Junior as Dan Hiroki
The chief of criminal investigations at the Tokyo Metropolitan Police Department. He is the youngest ever to head criminal investigations. The top brass have strong faith in him but his private life is a mystery. He finds out about the researcher Mano Reiji and shows a strong interest in him for some reason.

Funakoshi Eiichiro as Toramaru Ryohei
A veteran police detective with a self-righteous attitude, he presumes people who are under suspicion are the criminals. He thinks highly of the “detective’s instinct” he has cultivated from experience and has confrontations with Mano Reiji who is fixated on objective truth and evidence. He genuinely cares about victims and their surviving family members but is tied down by his long years in the police force. By the time he realises it, he had been blindly chalking up arrests. His wife and son left him because he was so focused on work and he is now alone. He has just transferred to the First Investigative Division and strives to achieve a feat. But he is aware that he has reached retirement age and has fuzzy doubts somewhere in his heart. He often clashes with Mano but gradually comes to have faith in his unshakeable conviction and competence. And then, he realises that there is something in Mano’s past and develops an interest.

This blog contains information and musings on current and upcoming Japanese dramas but is not intended to be comprehensive.
View all posts by jadefrost →
This entry was posted in Fuji TV, Winter 2019 Dramas and tagged Koyuki, Nishikido Ryo, Trace ~ Kasouken no Otoko. Bookmark the permalink.