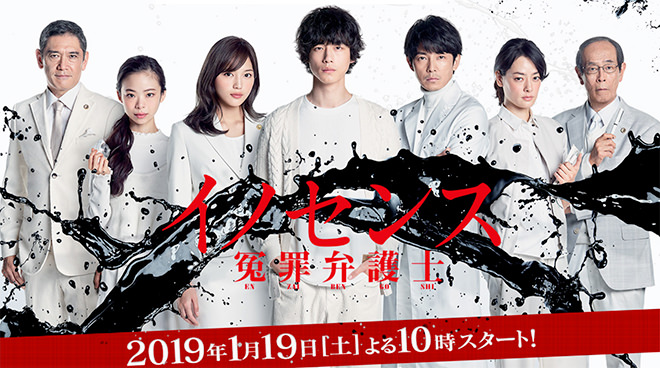 Story
Kurokawa Taku is a young lawyer who is in charge of criminal cases at the law firm, Hoshundo. With the help of journalists and scientists including Akiu Kyoichiro, an associate professor of physics, he tenaciously and passionately attempts to overturn convictions using science as his weapon and exonerate those who have been wrongfully sentenced by the Japanese courts. Taku has won a remarkable five cases in three years. Wakura Kaede, a rookie lawyer who started working at Hoshundo one month ago, is supposed to help Taku out but gets stressed out by his unique pace of work. On this day, Taku prioritises a meeting with a client, whose case he has accepted on his own accord, and cancels an interview with Arima Satoko, a news director at TV Nippon who is interested in cases where there have been a miscarriage of justice, at the last minute. His client is Aso Emiko’s husband Shigeo. Shigeo was arrested on suspicion of setting fire to his own house, and later confessed to his crime. Because the Asos are in debt, he is accused of arson for insurance on a day when Emiko was coincidentally not at home. However, Emiko does not believe he committed the crime. Taku shows an interest in the action hero figurines that Shigeo hastily took out of the house during the fire. These are a reminder of their son Yukio who passed away five years ago at the age of 10. Taku and Kaede go to meet Shigeo at once. He lifelessly admits to the details of his confession. But Taku throws a question at him and gets him to confess that he was coerced into making a false confession by the police. The next day, Taku and Kaede take photographic evidence of the remains of the Asos’ house. The paralegal Kinosaki Honoka gets concerned when she hears from the elementary school students who have gathered there, that the fire occurred because of Yukio’s curse. In fact, Yukio’s death was due to an accidental fire at a disused factory where they were playing with fireworks. Meanwhile, Kaede is summoned by Beppu Nagaharu, who heads Hoshundo. He assigns her to monitor both Taku and veteran lawyer Yufuin Kazuto who do not care about the firm’s profitability, so that they do not act rashly. Beppu does not seem to think very well of them as they are too critical of the police and prosecution. On the first day of the trial, Gero, the detective who interrogated Shigeo, appears in court as a witness. He provokes Shigeo who goes berserk in court and ends up creating a bad impression. To make matters worse, the prosecution uses science to rebut the claim by the defence that it was an accidental fire caused by a stove in the first floor closet. Kaede cannot help feeling irritated with Taku who does not seem flustered by the situation and makes another trip to the scene. She proposes that they switch to pleading extenuating circumstances in order to lighten Shigeo’s sentence. However, Taku gives an unexpected response. Then he heads to the university’s test facility where Akiu is waiting. Kaede sees Taku run wild beyond her imagination.

Characters
Sakaguchi Kentaro as Kurokawa Taku
A lawyer who belongs to Hoshundo. He proactively takes on cases known to be almost impossible to overturn, and has won several of them. He reenacts what actually happened at the crime scenes using experiments to shed light. He tackles preconceived notions, biases and inconsistencies in the investigations. He may be affable but is disorganised and hates interviews. He usually wears comfortable clothes and carries around a cloth bag with all sorts of items in it that will help him establish rapport with other people. An oddball who lives in the office’s storeroom, he is always short of cash.

Kawaguchi Haruna a Wakura Kaede
A rookie lawyer at Hoshundo. She has to work with Kurokawa Taku but often and raises her voice at his grandstanding. After she understands the importance of the demonstration experiments that Taku conducts in his quest for the truth, her opinion of him gradually changes.

Sugimoto Tetta as Beppu Nagaharu
The head of Hoshundo. He aims to turn it into an elite law firm that handles corporate legal work.

Ichikawa Mikako as Arima Satoko
A director at TV Nippon’s news bureau. She is doing a story on cases where there have been a miscarriage of justice.

Fujiki Naohito as Akiu Kyoichiro
An associate professor of physics at Touo University’s Department of Science and Engineering. Kurokawa Taku’s senior during his university days. Despite his lack of interest in other people, he will take on various demonstration experiments when Taku makes a request. He feels a profound sense of crisis that the police investigations still hold scientific proof in low regard. This has become his motivation for helping Taku.