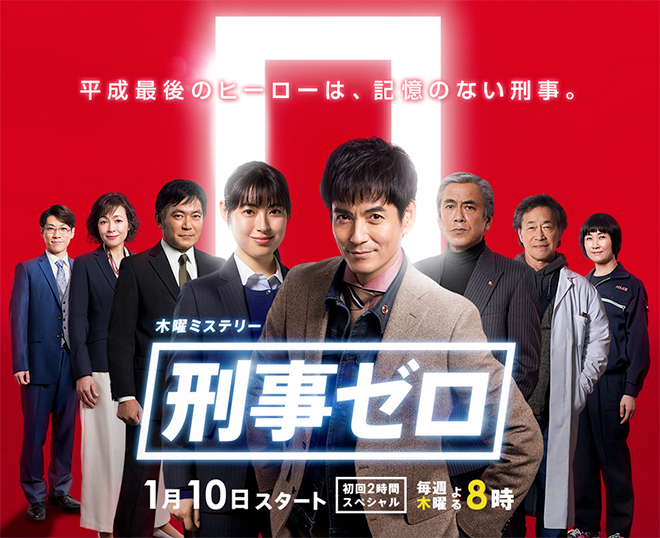 Story
Detective Tokiya Rekihiko is such an outstanding detective of the Kyoto Prefectural Police’s First Investigation Division that there is the label “Kyoto Prefectural Police has Tokiya”. However, he plunges into a water storage pool at a disused factory while pursuing a suspect. When he wakes up in a hospital ward, he realises that he has completely lost his memories of the 20 years since he was appointed to be a detective. Tokiya not only mistakes his former partner Fukuchi Ichiro for someone related to a gang when Fukuchi pays him a visit, but also feels nervous when he hears from the new detective Sasou Tomoka who has been ordered to be his new partner, that a female member of the prefectural assembly Shiina Aoi was stabbed to death late at night. Nothing registers even when he is shown her personal effects. Without disclosing his memory loss, Tokiya is first to arrive at the scene of a new murder case. The victim, Imamiya Ken, is a freelance writer. After he was hung from an iron bar in a park, coloured adhesive tape was pasted on the iron bar and the front of his dead body in a peculiar shape. Is the pattern a message from the killer? If it is a message, Tokiya has no idea whether the bloody characters left behind at Shiina Aoi’s murder scene were alphabets or code but he cannot believe that there is a connection between the well-known prefectural assembly member and insignificant freelance writer … … However, when he puts the tape close to his face, he exclaims that it smells the same as Shiina’s personal effects. In fact, Tokiya’s five senses are sharper to make up for the loss of his memory. His mutterings result in the formation of a joint investigation task force before he can do anything about it. But they find evidence that the two cases were committed by the same criminal. The investigation gets bogged down and Tokiya’s position within the task force becomes tenuous. Meanwhile, Tokiya’s instincts tell him that the scent is related to kumiko, an incense game in which players must distinguish and differentiate various types of incense on scent and memory alone. As the investigation progresses, a famous novelist Narushima Kyozo appears around the cases. But at that moment, a third case happens … … Now that he is back to “zero”, Tokiya applies unexpected approaches to solve cases. Tomoka unexpectedly has to share in his secret and prevent the people around them from discovering that he has lost his memories.

Characters
Sawamura Ikki as Tokiya Rekihiko
A detective with the First Investigation Division’s Thirteenth Section at the Kyoto Prefectural Police. Rank: Assistant Inspector. He has solved many difficult cases with the First Investigation Division since he was appointed to be a detective at the age of 31. However, he suffered a fall while pursuing a suspect in a case and lost memories of his 20 years as a detective. Before that happened, he conducted investigations with a high regard for organised investigations and objective evidence. However, after losing his memories, he transforms into a coward with no self-confidence. He keeps a low profile and is very self-conscious about the people around him. In spite of this, he has not lost his sense of justice and hatred of crime, and takes a completely different approach to cases from the person he was before he lost his memories. Although he is divorced, he has also lost his memories of his wife Noriko … …

Takimoto Miori as Sasou Tomoka
A new detective with the First Investigation Division’s Thirteenth Section at the Kyoto Prefectural Police. She has finally just been assigned to the First Investigation Division like a dream come true, after focusing on office work as a general clerk in the Criminal Investigations Department for many years. As an admirer of Tokiya Rekihiko, she has read all the records on the cases he has handled to the point that they have been imprinted in her mind. Because of that she is forced to be his “back-up data” or rather “instruction manual” to prevent the people around them from discovering that he has lost his memories. She is earnest and hardworking. She has little experience in love because she has been devoted to work. Although she admired Tokiya in the past, seeing him in a pathetic state right now actually snaps her out of her romanticised notions.

Terajima Susumu as Fukuchi Ichiro
A veteran detective with the First Investigation Division’s Thirteenth Section at the Kyoto Prefectural Police. Rank: Assistant Inspector. He and Tokiya Rekihiko were partners and has solved numerous cases. He regards the smart and handsome Tokiya as his rival because he was treated as the fierce-looking, boorish partner. He is convinced that he can become the next senior detective if Tokiya loses his standing.

Zaizen Naomi as Okuhata Noriko
Tokiya Rekihiko’s ex-wife. A lawyer who works for the Kyoto Third Bar Association. She is in charge of many criminal cases and met Tokiya about seven years ago when he was already a detective. They married within a short time. However, something happened between the two of them that led to an amicable divorce several years later. She has stayed single since then. She likes to win and has a way with words so she never loses an argument with anyone. She is stubborn and will not budge an inch once she makes up her mind. Deep in her heart, she has not got over Tokiya because the divorce was spurred partly by impulse and pride.

Takeda Tetsuya as Namatame Morio
Tokiya Rekihiko’s mother’s older brother. A doctor who runs a small clinic in Kyoto City. He has given Tokiya a helping hand ever since Tokiya’s parents passed away one after the other when he was a uniformed police officer. He let Tokiya live with him after he lost a roof over his head following his divorce from his wife Okuhata Noriko. He is knowledgeable about psychiatry and psychology, and gives Tokiya professional advice in an attempt to help him regain his memories as a detective. While he appears aloof, he worries about Tokiya.

This blog contains information and musings on current and upcoming Japanese dramas but is not intended to be comprehensive.
View all posts by jadefrost →
This entry was posted in TV Asahi, Winter 2019 Dramas and tagged Keiji Zero, Sawamura Ikki, Takeda Tetsuya, Takimoto Miori, Terajima Susumu. Bookmark the permalink.