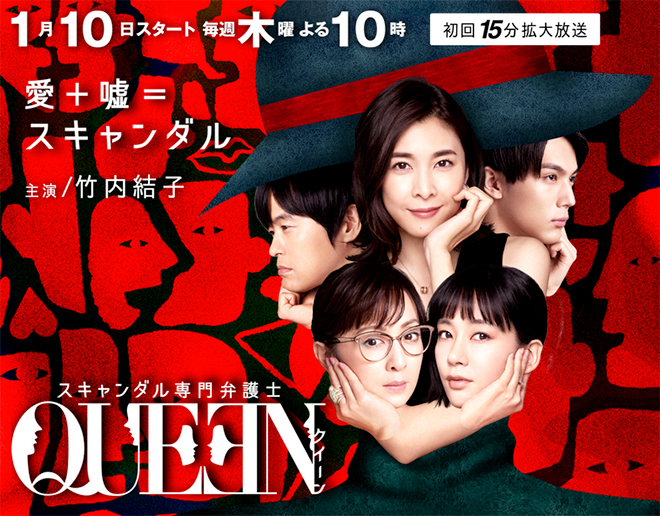 Story
Himi Ko is a lawyer who leads the crisis management team at the large law firm, Suzuki. Her main battleground is not in the courtroom but behind the scenes of scandals and problems. As a professional spin doctor, she manipulates information, turning even lies into the truth when it is necessary. She is a genius troubleshooter who saves the day for clients in social predicaments 99% of the time. Her clients come from all walks of life including politics, entertainment and sports. Ko has just successfully finished handling a sexual harassment case at the request of Todo Yuko, a reporter with Minato TV. She has just a brief moment to think of taking time off at last when a new case comes in. It is from Minato TV’s producer Fukagawa Shoichi, who is in charge of Forester, a programme that is named after the national idol group Forest. While the programme was on air, one of the members Shiraishi Anri who was performing, suddenly shoved another member Akae Momoko, who had stopped singing, aside. This scene went viral on the internet, triggering speculation about the group’s falling out and breakup. Minato TV also received a deluge of complaints. In order to settle the matter, Fukagawa intends to hold a press conference to apologise at the next recording of the programme. He seeks the help of Ko and her colleagues Yoda Chie and Fujieda Shuji, to ensure that the event runs smoothly. Meanwhile, Minato TV receives a note with a threat to kill Anri … …

Characters
Takeuchi Yuko as Himi Ko
A lawyer with a unique style. She is a talented troubleshooter who will turn lies into the truth at times in order to save her clients. She has a startlingly ability to read people’s minds. Although she looks easygoing, she is a tactician who can anticipate things several steps ahead. She has a strong conviction about saving females who are stuck in crises, and goes ahead with whatever she believes in.

Mizukawa Asami as Yoda Chie
A lawyer who specialises in crisis management just like Himi Ko. She understands Ko’s intentions and works perfectly with her. She is fast on her feet and has a logical and frank personality. But once she gets angry, even Ko is unable to stop her.

Nakagawa Taishi as Fujieda Shuji
A handsome new lawyer specialising in crisis management. He is a Harvard graduate but is rather simple-minded so he gets mocked by Himi Ko and other colleagues for lying about his educational background. However, he has a strong sense of justice that makes him want to help people in need.

Izumi Rika as Todo Yuko
A capable reporter who targets scoops. She is sexually harassed by a politician’s son, and gets to know Himi Ko whom she asked to deal with her case. They establish a relationship of helping each other to probe around for information.

Bakarhythm as Suzuki Taro
The deputy at the law firm where Himi Ko, Yoda Chie and Fujieda Shuji work. His father is the head of the law firm so he was born into a wealthy family. He leaves all the work that comes in to Himi Ko and the rest. While he lets their protests about this being a business that exploits employees pass, his keen insight startles them.

Saito Yuki as Mano Seiko
A clerk at the law firm who possesses advanced hacking skills and is largely a mystery. An unfathomable woman who does not show her emotions as she does things at her own pace. She is divorced and has children. As her checkered past is gradually, it shocks even Himi Ko and Yoda Chie who are used to scandals.

This blog contains information and musings on current and upcoming Japanese dramas but is not intended to be comprehensive.
View all posts by jadefrost →
This entry was posted in Fuji TV, Winter 2019 Dramas and tagged Bakarhythm, Mizukawa Asami, Nakagawa Taishi, Scandal Senmon Bengoshi QUEEN, Takeuchi Yuko. Bookmark the permalink.