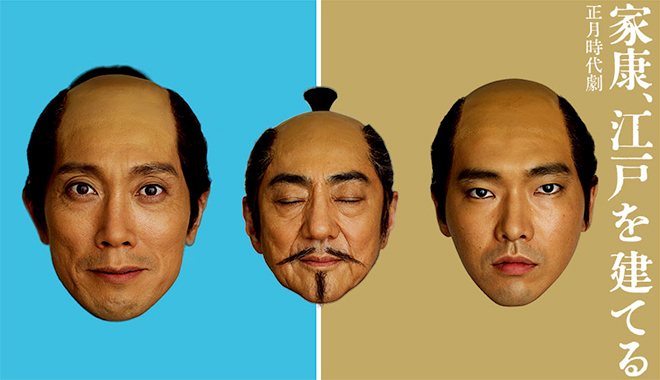 First Part ~ Mizu o Seisu
Synopsis: Tokugawa Ieyasu (Ichimura Masachika) wonders what he should do to make it possible for people to live in this flooded lowland swamp which will eventually become Tokyo. Well water is hard to come by in the Kanto Plain where seawater flows into. There is an urgent need to secure clean water in order for people to live here. Ieyasu’s vassal Okubo Tadayuki (Sasaki Kuranosuke) is ordered to develop a drinking water supply. Okubo was injured on the battlefield in his younger days and is unable to sit astride a horse. He has been making confectionery for Ieyasu for years and now he has to tackle his greatest task of a lifetime – to channel water from present day Inokashira Pond to the town of Edo. However, a village headman Uchida Rokujiro (Namase Katsuhisa) who is only popular with the peasants of Musashi Plain and the eccentric technocrat Kasuga Seibei (Chiba Yudai) become his right-hand men. Okubo has a hard time handling the two of them. In contrast, Ina Tadatsugu (Matsushige Yutaka) who has taken on the challenge of changing the flow of the Tone River, begins to make steady gains. While Okubo Choan (Takashima Masanobu) who is in charge of the Tokugawa government’s purse strings applies tremendous pressure on the long drawn-out project, Rokujiro asks for Ina’s assistance to complete the Kanda water supply but … …
Cast: Sasaki Kuranosuke, Namase Katsuhisa, Yuka, Chiba Yudai, Magy, Takashima Masanobu, Matsushige Yutaka, Ichimura Masachika

Second Part ~ Kinka no Machi
Synopsis: Ieyasu (Ichimura Masachika) sets his sights on establishing Edo as the capital for the production of all the koban, small gold coins that would become common currency for the entire country. Osaka, the base of the Toyotomi clan, is currently the economic centre of Japan where people and goods are concentrated. To make Edo a greater economic centre than Osaka, Japan’s first currency in circulation which will be issued across the country and used with ease, must be produced in Edo. Ieyasu selects Hashimoto Shozaburo (Emoto Tasuku) who is a mere workman of the well-known Goto clan of Kyoto which controls the production of large gold coins known as oban which were used as presents. Despite having the best skills, Shozaburo has not been able to do work displaying his name because he is not a member of the clan. To him, going to Edo and producing gold coins under Ieyasu that will be issued to all the people, is a chance of a lifetime. However, Goto Tokujo (Yoshida Kotaro), the head of the clan, dangles marriage to his daughter Saki (Hirose Alice) and even uses Hideyoshi’s might to thwart the production of the koban. Shozaburo strives to make high quality coins that are uniform. Then the Battle of Sekigahara takes place. What is Shozaburo’s solution?
Cast: Emoto Tasuku, Hirose Alice, Hayashi Kento, Ihara Rikka, Takahashi Kazuya, Fukikoshi Mitsuru, Takashima Masanobu, Yoshida Kotaro, Ichimura Masachika