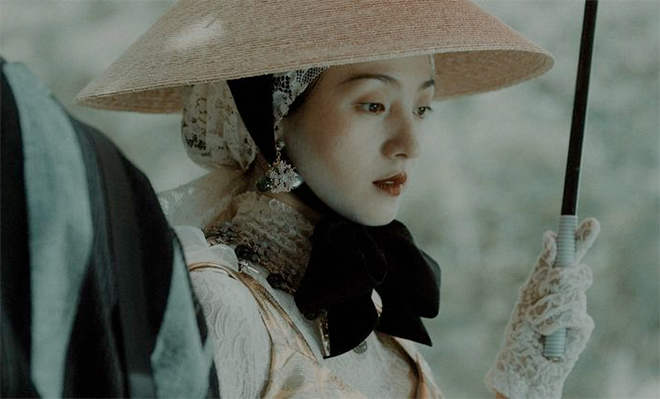 Osei Toujou
Story: The bewitching Osei (Mitsushima Hikari) is married to a wealthy husband (Kudo Kankuro) whose poor health gives her the opportunity to indulge in an affair. Although she trembles with a guilty conscience, she takes advantage of a coincidental event one day, and succeeds in the perfect crime of killing her husband. Osei proceeds to play the grief-stricken wife and totally fools the people around her. Then the dying message left by her husband is found … …
Cast: Mitsushima Hikari, Kudo Kankuro

Soroban ga Koi o Kataru Hanashi
Story: An introverted young man T (Iwai Yuki) is in love with his colleague S-ko (Mitsushima Hikari). He wants to convey his feelings to her in some way and hits on the idea of codes using the abacus. T reports for work earlier than S-ko every morning and uses the abacus on her desk to keep sending messages. Then one day, he gets a reply from S-ko! Will T succeed in love?
Cast: Mitsushima Hikari, Iwai Yuki

Hito de Nashi no Koi
Story: Kyoko (Mitsushima Hikari) is a young wife who married into a family of pedigree just as she hoped for. Her good-looking husband (Kora Kengo) is caring and she seems to be on top of the world. However, one day, Kyoko suspects her husband of having an affair. She follows him when he secretly slips out of their bedroom late in the night and learns that he is having a tryst with a woman on the second floor of the storehouse. Consumed by jealousy, Kyoko faces a tragic end … …
Cast: Mitsushima Hikari, Kora Kengo

This blog contains information and musings on current and upcoming Japanese dramas but is not intended to be comprehensive.
View all posts by jadefrost →
This entry was posted in NHK, Winter 2019 Drama Specials and tagged Edogawa Ranpo, Kora Kengo, Kudo Kankuro, Mitsushima Hikari. Bookmark the permalink.