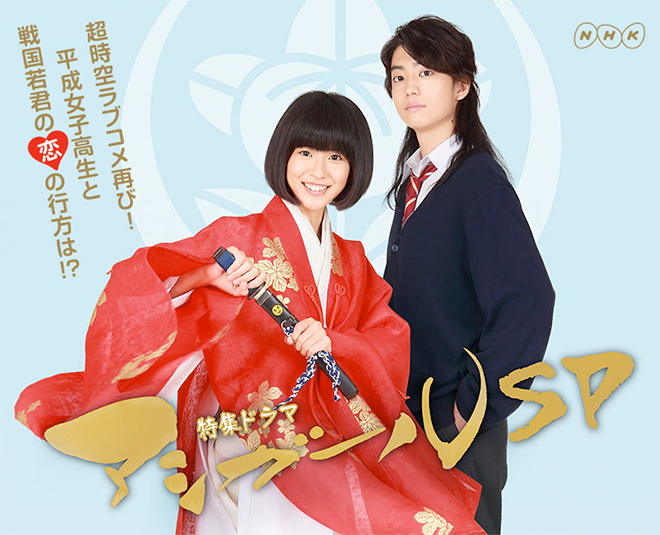 Date: From 9.00 p.m., 24 December 2018
Scriptwriter: Miyamura Yuko (Ashi Girl, Hanamoyu, Nanatsu no Kaigi)
Original Work: Ashi Girl by Morimoto Kozueko
Cast: Kuroshima Yuina, Ito Kentaro, Matsushita Yuya, Tomosaka Rie, Kawaei Rina, Masana Bokuzo, Nishimura Masahiko, Masu Takeshi, Ishiguro Ken, Issey Ogata, Iida Kisuke, Tanaka Misato, Kato Ryo, Murata Takehiro
Synopsis: High school girl Hayakawa Yui (Kuroshima Yuina) was sent back in time to 1560 during the Sengoku Period through a time machine built by her younger brother Takeru. She risked her own life to help out the Hagi clan and fell in love with Hagi Kuhachiro Tadakiyo (Ito Kentaro), the heir of the feudal lord Hagi Tadataka (Ishiguro Ken). Tadataka is a typical warlord of the period who believes in winning battles. But his mindset gradually changes because of Yui and Tadakiyo, and he even permits their marriage. Yui is betrothed to Tadakiyo. However, the clan’s arch enemy Koyama Munetsuru (Murata Takehiro), whom they were supposed to have made peace with, launches yet another battle at the instigation of Oda Nobunaga’s vassal Ouga Kazunari (Nishimura Masahiko). Ouga’s true aim is to make Koyama and Hagi fight and capture the country. Tadakiyo leaves Yui behind and heads to the castle where the advance guard is in order to stop this senseless war. Yui tells his father that Tadakiyo believes it is true victory to live. She escapes from the Hagi clan’s stronghold and goes after him … …
Official Website: www.nhk.or.jp/dsp/ashigirlsp

This blog contains information and musings on current and upcoming Japanese dramas but is not intended to be comprehensive.
View all posts by jadefrost →
This entry was posted in NHK, Winter 2019 Drama Specials and tagged Ashi Girl Series. Bookmark the permalink.