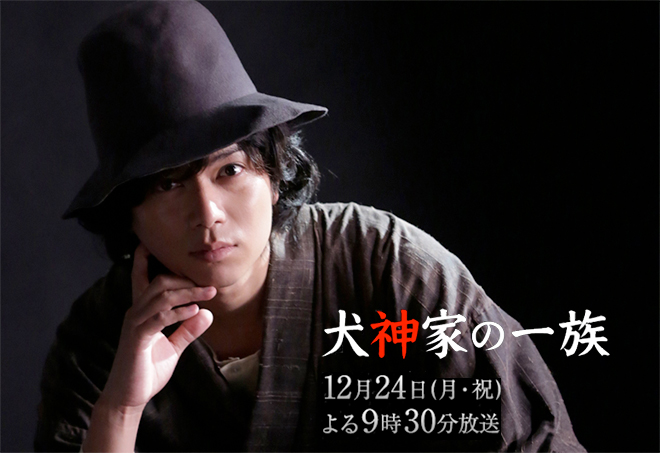 Date: From 9.30 p.m., 24 December 2018
Scriptwriter: Nemoto Nonji (Ten Tenhodori no Kaidanji, Otoko no Misao, Izakaya Fuji)
Original Work:
Cast: Kato Shigeaki, Kaku Kento, Takanashi Rin, Shinagawa Toru, Kasahara Hideyuki, Ando Sei, Tanabe Kenichiro, Shoji Yusuke, Sakaguchi Ryotaro, Matsuda Miyuki, Ryo, Kajihara Zen, Satoi Kenta, Okura Koji, Ono Takehiko, Kaji Meiko, Namase Katsuhisa, Satomi Kotaro (guest star), Kuroki Hitomi
Synopsis: In 1947, Inugami Sahei (Satomi Kotaro), who built the Inugami conglomerate in one generation, passes away at his main residence by Lake Nasu as his family keep vigil. He left behind a vast fortune and his will is to be announced after Sukekiyo (Kaku Kento), the only son of his eldest daughter Matsuko (Kuroki Hitomi), returns from the battlefield. And so, the family wait for Sukekiyo to come back. Sahei did not have a legal wife during his lifetime. His three daughters Matsuko, Takeko (Matsuda Miyuki) and Umeko (Ryo) have different mothers. All of them married men who were adopted into the family. Furthermore, each daughter has a son (Kasahara Hideyuki, Sakaguchi Ryotaro) but they do not get along. Several months later, Kindaichi Kosuke (Kato Shigeaki) visits the Inugami clan’s residence at Lake Nasu in order to get a letter from Wakabayashi Toyoichiro (Shoji Yusuke) who works for the law firm called Furutachi and serves as the family’s lawyer. The contents of the letter says that a bloody incident will soon take place in the Inugami family and warns them to take precautions. Based in his lodgings at Nasu hotel, Kindaichi is looking out at the family mansion from the lakeside when he sees the boat that the Inugami family’s adopted daughter, Tamayo (Takanashi Rin), is in sink. He attempts to help but nearly drowns. In the end, the family’s manservant Saruzo (Okura Koji) rescues Tamayo. They discover that boat has been tampered with. This is the third time that Tamayo has been targeted by someone. Just after Kindaichi returns to his hotel, Wakabayashi is killed with poison by someone. It seems that he had taken money from a member of the family and might have stolen a look at Sahei’s will which is kept in the law firm’s safe. At the request of Wakabayashi’s boss Furutachi Kyozo (Ono Takehiko), Kindaichi is present at the reading of Sahei’s will for the Inugami clan. Meanwhile, Sukekiyo who suffered serious facial injuries at the battlefront in Burma, has returned wearing a rubber mask. Furutachi discloses the contents of the will which states the distribution of assets and Sahei’s successor … …
Official Website: www.fujitv.co.jp/inugamike

This blog contains information and musings on current and upcoming Japanese dramas but is not intended to be comprehensive.
View all posts by jadefrost →
This entry was posted in Fuji TV, Winter 2019 Drama Specials and tagged Inugamike no Ichizoku, Kaku Kento, Kato Shigeaki, Kuroki Hitomi, Namase Katsuhisa, Ono Takehiko, Takanashi Rin. Bookmark the permalink.