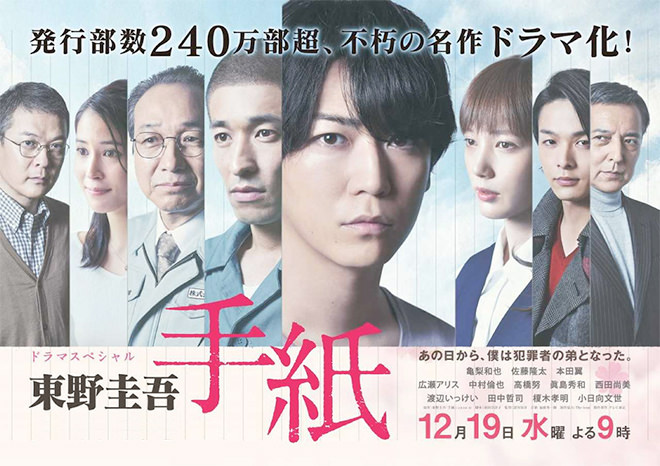 Date: From 9.00 p.m., 19 December 2018
Scriptwriter: Ikeda Natsuko (Shinhannin, Miyazawa Kenji no Shokutaku, Algernon ni Hanabata o (2015))
Original Work: Tegami by Higashino Keigo
Cast: Kamenashi Kazuya, Sato Ryuta, Honda Tsubasa, Hirose Alice, Nakamura Tomoya, Takahashi Tsutomi, Mashima Hidekazu, Nishida Naomi, Watanabe Ikkei, Tanaka Tetsushi, Enoki Takaaki, Kohinata Fumiyo
Synopsis: Four years ago, Takeshima Naoki’s (Kamenashi Kazuya) older brother Tsuyoshi (Sato Ryuta) broke into a house to steal, out of a sheer desire to put Naoki into university. However, Tsuyoshi unwittingly killed someone in that house and was arrested for robbery as well as murder. As a result, he was convicted and sentenced to 20 years in prison. From then on, he would send a letter from prison to Naoki every month. Naoki works while attending high school evening classes. He assures his brother in a letter not to worry because he is doing well. But in truth, he has been hopping from one part-time job to another and has also had no choice but to change his address often. In this digital world, life’s happiness has slipped through Naoki’s hands because of the label “younger brother of robbery and murder criminal”. He has had to endure the discrimination and prejudice of the people around him. Naoki gradually ignores Tsuyoshi’s letters and eventually the brothers come to a big decision.
Official Website: www.tv-tokyo.co.jp/tegami

This blog contains information and musings on current and upcoming Japanese dramas but is not intended to be comprehensive.
View all posts by jadefrost →
This entry was posted in TV Tokyo, Winter 2019 Drama Specials and tagged Higashino Keigo, Hirose Alice, Kamenashi Kazuya, Kohinata Fumiyo, Mashima Hidekazu, Nishida Naomi, Tegami. Bookmark the permalink.