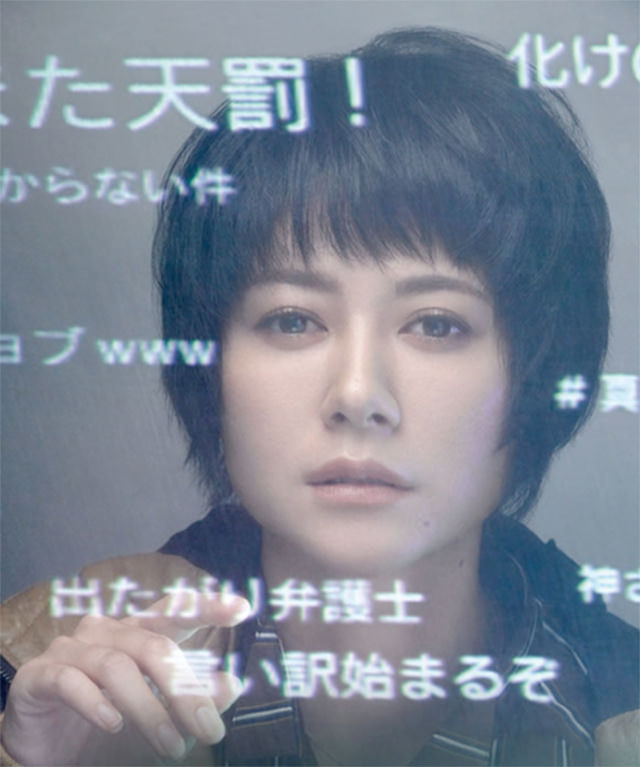 Date: From 9.00 p.m., 15 December 2018
Scriptwriter: Inoue Yumiko (Pandora Series, Harassment Game, BG)
Cast: Maki Yoko, Naka Riisa, Iwata Takanori, Okayama Amane, Koyanagi Rumiko, Katagiri Hairi, Uzaki Ryudo, Ozawa Yukiyoshi
Synopsis: Watarai Miho (Maki Yoko) was a successful lawyer who was in charge of corporate risk management at a major law firm. But she was forced to resign over the online shaming of a large company, and now has an office on the second floor of the house where she lives with her father Akihiko (Uzaki Ryudo). Miho mainly takes the cases of people who have become the “enemy of society”, bashed by society and mass media. One day, a housewife Kusakabe Tomomi (Naka Riisa) shows up. Tomomi has amassed many followers on her social media account. But when she posted a video of the showroom of an apartment developer, who was indifferent to her, on fire, she was suspected of orchestrating arson with the aim of going viral, and immediately got flamed. Although the overwhelming odds of winning this case gives Miho pause, she takes it because of the aggression directed at Tomomi. However, there is an attack on Tomomi’s own house by netizens who figured out the location. In addition, she is sued by the apartment developer for obstruction of business and a large sum is demanded as compensation. Kitasaka Shiro (Ozawa Yukiyoshi), the lawyer representing the apartment developer, used to be Miho’s colleague at a major law firm and also her boyfriend. However, he played her out in the case which became the reason for her resignation from the law firm. In order to protect Tomomi whose back is against the wall, Miho teams up with internet journalist Baba Akira (Iwata Takanori), who has been pursuing Tomomi’s case, and makes the decision to let her proclaim her innocence through an internet broadcast. But … …
Official Website: www.nhk.or.jp/dodra/enjoh

This blog contains information and musings on current and upcoming Japanese dramas but is not intended to be comprehensive.
View all posts by jadefrost →
This entry was posted in NHK, Winter 2019 Drama Specials and tagged Enjou Bengonin, Maki Yoko, Naka Riisa, Ozawa Yukiyoshi. Bookmark the permalink.