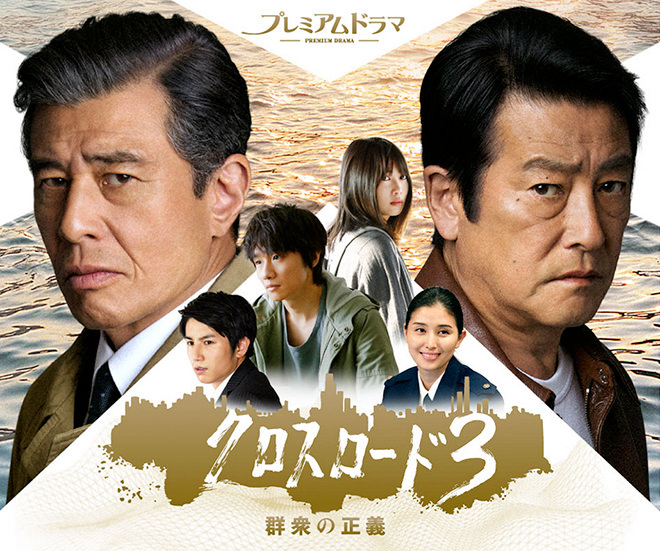 Story
Ozeki Tatsuro who works for the Omo Rinko Police Precinct’s Police Affairs Division is preoccupied with handling phone calls about the serial murders in Ota ward from residents the area. Araki Takuma has been named a suspect by a social media site called JUSTICE which covers information on the cases. The police receives a phone call from Araki who makes a veiled reference to a confession. The investigation task force which had been pursuing another man as a suspect, hastily gets Araki to come voluntarily for questioning and begins questioning him. Meanwhile, freelance journalist Itagaki Kohei is fed up of his job and burns his interview notes on a beach. This is where he finds Misaki Akane, a young woman who is suffering from a debilitating illness. Itagaki is about to lend her a hand when a man hurls himself at him. He later learns that the man is Fujishiro Shion, an online journalist who streams news videos on Net Scoop, and Akane was the junior high school girl in an article he wrote about bullying. Because she is also involved in the Ota ward serial murders, Ozeki and Itagaki get entangled in a big mystery … …

Characters
Tachi Hiroshi as Ozeki Tatsuro
An elite detective formerly with the Tokyo Metropolitan Police Department’s First Investigative Division. He was removed from the frontline for leaking information to a reporter, Itagaki Kohei, in the past. After that, he moved from precinct to precinct and now works for Omo Rinko Police Precinct’s Police Affairs Division. He is due to retire in six months.

Kanda Masaki as Itagaki Kohei
He went from ace of the local news desk at a major newspaper, to journalist of the Tamatama Shimbun. Although he is active as a freelance journalist after Tamatama Shimbun ceased publication, he has withdrawn from journalism because he wrongly accused a suspect of a case in his own article.

Kazama Shunsuke as Fujishiro Shion
An online journalist who runs Net Scoop, a site which streams news videos on the stories he covers on his own. He is concerned about fellow journalist Itagaki Kohei.

Shida Mirai as Misaki Akane
Someone broke into her home right before the Ota ward serial murders. She is criticised by netizens for not reporting this to the police at that time. She has a connection with Itagaki Kohei because of a bullying incident during her junior high school days … …

Kanda Joe as Kanda Joe
A detective of Omo Rinko Police Precinct. He was Ozeki Tatsuro’s partner when Ozeki was in the Criminal Affairs Division. The suspect and Misaki Akane take advantage of his goodness in the investigation of the Ota ward serial murders. But … …

Tsukamoto Takashi as Araki Takuma
He sells second-hand brand items door-to-door but he always gets into trouble with customers due to his fradulent methods. He spent time at a juvenile correctional institution in the past and has been treated like a criminal in the serial murder cases by social media sites online.

This blog contains information and musings on current and upcoming Japanese dramas but is not intended to be comprehensive.
View all posts by jadefrost →
This entry was posted in Fall 2018 Dramas, NHK and tagged Crossroad Series, Kanda Masaki, Shida Mirai, Tachi Hiroshi. Bookmark the permalink.