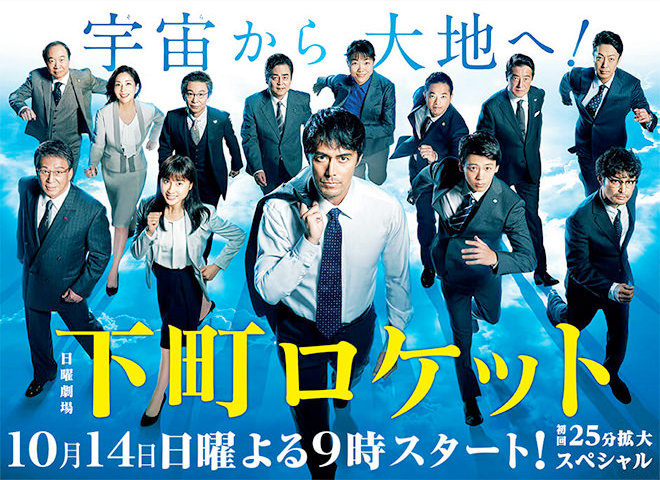 Story
Tsukuda Industries has weathered frequent difficulties such as the patent infringement suit, development of the valve system for rocket engines and design of an artificial Gaudi heart valve due to the unity of its employees. However, it lands in yet another predicament because of an unanticipated problem. A downturn in the business of Teikoku Heavy Industries, one of Japan’s leading corporations which is a customer of the rocket engine valve system that has now become Tsukuda Industries’s flagship product, and a change in CEOs may spell the end of the Stardust Programme. It has always been Tsukuda Kohei’s dream to be involved in building rockets and “rocket quality” has also become the spirit for his employees. Right on the heels of this shocking news, a major client which is a manufacturer of agricultural machinery announces a reduction in its deal for small engines. The emphasis placed on cost over performance begins to rock the very identity of Tsukuda Industries which has been touting its technical capabilities and Tsukuda feels a strong sense of crisis. Meanwhile, Tonomura Naohiro, the head of the accounting department, is faced with a dilemma when his father collapses. He returns to his hometown every weekend to help take care of his father and farm work. Tsukuda and Yamasaki Mitsuhiko, the head of Tsukuda Industries’ technology development department, pay Tonomura a visit. As he looks hard at the tractor that Tonomura is driving, Tsukuda comes to some realisation and makes an unexpected decision to ride through this rough patch. And so, Tsukuda Industries undergoes a significant transformation from the “universe” to the “earth”.

Characters
Abe Hiroshi as Tsukuda Kohei
The second generation company president of Tsukuda Industries which develops and sells small engines. A proud technical expert who is passionate about his work. He was a researcher of the space science development agency, but resigned to take responsibility for a failed rocket launch and took over the small factory that his father left to him. However, he could not give up his dream of creating a rocket engine and conducted research on a valve system that is essential to the engine. The valve system is eventually used in Teikoku Heavy Industries’ Stardust Programme. He also helps in the Gaudi Programme to develop an artificial valve for heart patients. Tsukuda Industries is doing well ahead of the commercialisation of the artificial valve. Then one day, he is informed by Teikoku Heavy Industries that the Stardust Programme may come to an end. Right on the heels of this shocking news, Yamatani, a major client which is a manufacturer of agricultural machinery, announces a reduction in its deal for small engines. Feeling a sense of crisis, he has a dream to work not just with engines but also transmissions when he goes to the hometown of Tonomura Naohiro, the head of the accounting department. He meets Gear Ghost, a start-up dealing with transmissions and relates to its beliefs and also comes to the rescue in a patent infringement lawsuit. However, he gets betrayed by the CEO Itami Dai.

Tsuchiya Tao as Tsukuda Rina
Tsukuda Kohei’s only daughter. After her mother Saya left, her grandmother Kazue became her surrogate mother. She attended the science and engineering department in university and found a job at Teikoku Heavy Industries, influenced by her father’s passion for rockets. She is involved in developing a new model of engines.

Takeuchi Ryoma as Tachibana Yosuke
A technician who works for Tsukuda Industries’ technology development department. He is very serious and has no sense of humour but he is a trustworthy and enthusiastic young man who does not cut corners. He becomes the team leader in the Gaudi Programme. Although he feels the weight of his responsibility, he earnestly devotes himself to the development of an artificial valve. While studying on his own in order to get into the rocket team, he joins the team to develop a valve that will be used by tractor transmissions, a new sector that Tsukuda Industries is going into. However, he has a difference in opinions with the team leader Karube Makio.

Yasuda Ken as Yamasaki Mitsuhiko
Tsukuda Kohei’s right-hand man. The head of Tsukuda Industries’ technology development department. Tsukuda Kohei’s junior from university days. Appreciated for his skills, he was invited to lead the technology development department. He is a dedicated researcher who loves experiments more than his three meals. He is usually a man of few words, but speaks fervently when it concerns the research that he is involved in.

Tatekawa Danshun as Tonomura Naohiro
A bank employee from Hakusui Bank who had been seconded to Tsukuda Industries as the head of the accounting department. He was inspired by the dedication of Tsukuda Kohei and his men to their work, and became an employee of Tsukuda Industries. Although he is awkward, he is more attached to the company than anyone else. He speaks harshly to Tsukuda and the employees but he means well. He has earned their respect and become Tsukuda’s confidant and integral to Tsukuda Industries. Then he is informed that his father has collapsed. Because his family has been farmers for 300 years, he returns to his hometown every weekend to help take care of his father and farm work. This is how he learns about his father’s feelings for growing rice. He decides to take over as a rice farmer and resigns from Tsukuda Industries.

Imoto Ayako as Shimazu Yu
The former deputy CEO and technical expert of the start-up Gear Ghost. Unhappy with her CEO Itami Dai for losing sight of the spirit of craftsmanship which was the original intention of Gear Ghost, betraying Tsukuda Industries and tying up with Daedalus, she resigned from the company which she had set up with him. She used to be an employee of Teikoku Heavy Industries and was a talented engineer. Gear Ghost’s focus was transmissions and the company grew rapidly based on a new business model of outsourcing after selecting individual parts through competitions. She meets the members of Tsukuda Industries including Tsukuda Kohei and reaffirms the joy of craftsmanship, but … …

Maya Miki as Izumi Saya
Tsukuda Kohei’s ex-wife. They attended the same university and got married when they were still students. However, her husband who had been an outstanding researcher, became the company president of Tsukuda Industries. She grew concerned and fed up with his focus on running the business and they got a divorce. Even after that, she remained at the space science development agency, taking the tried-and-tested path of a researcher. They still keep in touch with each other. She was the one who introduced the lawyer Kamiya Shuichi, who specialises in intellectual property, to Tsukuda when she heard about Nakashima Industries’ lawsuit.

Onoe Kikunosuke as Itami Dai
The hotshot CEO of the start-up Gear Ghost. A former employee of Teikoku Heavy Industries, he has experience taking charge of the machinery and project planning departments. He set up Gear Ghost with a research colleague Shimazu Yu five years ago and rapidly grew it. Although he does not have technical skills, he developed the company with a new business model and gained attention as a maverick in the industry. At this point, they were sued by KE Machinery for patent infringement. It was his legal advisor Suenaga Takaaki who had leaked internal information. With the help of the employees and legal adviser Kamiya Shuichi of Tsukuda Industries, he won the lawsuit. However, when he is told about the real nature of Matoba Shunichi, who was his boss during his time at Teikoku Heavy Industries, and truth of the past by Shigeta Toshiyuki, the company president of Daedalus, he decides to take revenge. He betrays Tsukuda Industries and forms an alliance with Daedalus involving equity capital.

Furutachi Ichiro as Shigeta Toshiyuki
The company president of Daedalus, a small engine manufacturer which is the major rival of Tsukuda Industries. With the slogan “First-rate cost, second-rate technology”, he has made inroads with new customers and quickly produced results. Unlike Tsukuda Industries which touts its “rocket quality” technical capabilities, he believes it is enough to be able to power engines for farm machinery. He was the company president of Shigeta Industries where his father Toshinobu served as chairman. However,the contracts were terminated and the company went bankrupt because of Matoba Shunichi and Itami Dai of Teikoku Heavy Industries. After his father’s death, he bought a company which manufactures small engines and this became Daedalus. He makes use of the lawsuit between Gear Ghost and KE Machinery to try to acquire Gear Ghost. But KE Machinery loses the lawsuit. Nevertheless, he wins the favour of Itami and they form an alliance involving equity capital. Together with Itami, he vows revenge on Matoba.

Kanda Masaki as Matoba Shunichi
A director of Teikoku Heavy Industries and a candidate to be the next company president after Toma Hideki. He is skeptical about the Stardust Programme and acts in a disturbing manner as the anti-Toma faction that opposes the rocket development programme. As the leading candidate to be the next company president, he begins to force Toma and Zaizen Michio into a corner. When he headed the machinery department, he cut off Shigeta Industries and caused its bankruptcy. Furthermore, he pretended to help Itami Dai, who his subordinate at that time, as a warning to him and pushed him to resign. That is why Itami and Shigeta Toshiyuki hate him.

Kikkawa Koji as Zaizen Michio
The head of Teikoku Heavy Industries’ space planning and promotion group and former head of the aeronautics and space department. He has been in the elite track ever since he joined the company and is in charge of the Stardust Programme, a project under company president Fujima Hideki to develop a domestic rocket. Impressed by the technical capabilities of Tsukuda Industries which he stumbled across, he persuaded Fujima, whose policy is to produce key technology in-house, and secured the supply of Tsukuda Industries’ valve system. Even with the change in the company’s policy after that to select component suppliers, he believes in Tsukuda’s technical skills and strives to install Tsukuda Industries’ valve. It has been 10 years since the launch of the Stardust Programme which he has been spearheading. However, he is ordered by Matoba Shunichi to transfer to his present position. Even so, he believes there is no business that is risk-free and shifts his focus to businesses which used quasi-zenith satellite yatagarasu, and proposes a new venture to save the dying agricultural industry.

This blog contains information and musings on current and upcoming Japanese dramas but is not intended to be comprehensive.
View all posts by jadefrost →
This entry was posted in Fall 2018 Dramas, Shitamachi Rocket, TBS/MBS and tagged Abe Hiroshi, Ikeido Jun, Shitamachi Rocket Series (TBS), Tsuchiya Tao, Yasuda Ken. Bookmark the permalink.