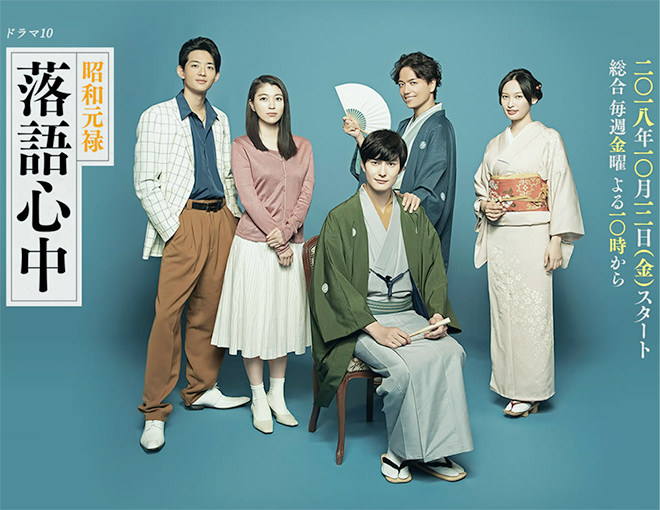 Story
In the early days of the Showa era, Yakumo enters the world of rakugo, traditional Japanese comic storytelling. He forges a firm friendship with the talented Sukeroku who began training at the same time. Yakumo is drawn to Sukeroku’s craft and envious. He struggles to catch up and develops with the support of the lonely geisha Miyokichi. Before long, Sukeroku and Miyokichi are united in marriage. But the two of them die in a very mysterious accident. Yakumo adopts their orphaned child Konatsu because there are no relatives while carrying a secret surrounding their deaths. Yotaro is released from prison after serving time and asks to be Yakumo’s disciple. He says he was captivated by Yakumo at a performance of “Shinigami” that he had given at the prison. Yakumo has a reputation for not taking disciples but he accepts Yotaro for some reason. One day, Yotaro learns that Konatsu hates Yakumo as her parents’ foe. Together with Yotaro, she soon begins to close in on the truth about the deaths of Sukeroku and Miyokichi which Yakumo has covered up.

Characters
Okada Masaki as Yurakutei Yakumo VIII (Kikuhiko)
A rakugo story teller who was active for a long time from the pre-war period to the Heisei era. He used the name Kikuhiko when he was an apprentice of the zenza level and went on to become a master story teller. He later succeeded to the rakugo professional name of Yurakutei Yakumo VII. He is cool and good at stories that make people listen carefully. Although his principle is not to take a disciple, he accepts Yotaro for some reason.

Ryusei Ryo as Yurakutei (Yotaro)
He was exposed to Yakumo’s rakugo story telling while serving time in prison and decided to become his disciple. Although Yakumo has a reputation for not taking disciples, he made a direct plea to him. He was accepted for some reason. He seems to have had something to do with gangsters before he entered prison. 体当たりで入門を直訴。

Narumi Riko as Konatsu
Yakumo’s adopted daughter. The daughter of Yakumo’s close friend, the late rakugo story teller Yurakutei Sukeroku. She was raised on rakugo since she was a child and has intimate knowledge of it. Her parents died in an accident when she was a child and she hates Yakumo as her parents’ foe.

Omasa Aya as Miyokichi
A geisha whom Yakumo had known back when he had the name Kikuhiko. She devotedly supported him but she married his close friend Sukeroku and they had a daughter Konatsu. She and Sukeroku died young in an accident.

Yamazaki Ikusaburo as Yurakutei Sukeroku II (Hatsutaro)
Yakumo’s close friend. A rakugo story teller whom he admired and an eternal rival. He used the name Hatsutaro when he was an apprentice of the zenza level. During his youth, he and Yakumo became disciples on the same day to the same teacher, and devoted themselves to training. He was a talented and could do anything. He enjoyed popularity before he became a full-fledged master story teller. He had a daughter Konatsu with the geisha Miyokichi but died young in an accident.

This blog contains information and musings on current and upcoming Japanese dramas but is not intended to be comprehensive.
View all posts by jadefrost →
This entry was posted in Fall 2018 Dramas, NHK and tagged Narumi Riko, Okada Masaki, Showa Genroku Rakugo Shinjuu, Yamazaki Ikusaburo. Bookmark the permalink.