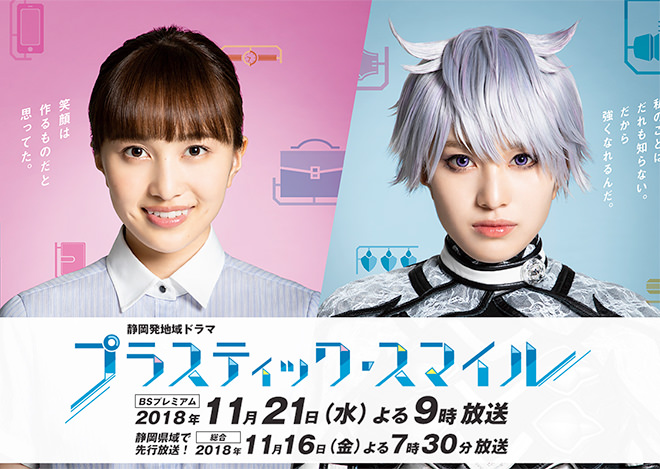 Date: From 9.00 p.m., 21 November 2018
Scriptwriter: Kurosawa Hisako (Minshuu no Teki, Tokyo Joshi Zukan, Arechi no Koi)
Cast: Momota Kanako, Aoyagi Sho, Takeda Shinji, Nakamura Yasuhi, Katayama Moemi, Sugino Kiki, Anzai Hajime, ROSARIO + CROSS, Tanaka Misato, Makino Nozomi
Synopsis: The plastic model industry is thriving in Shizuoka City in Shizuoka Prefecture, which is called the plastic model capital of the world and boasts the largest shipment nationwide. 25-year-old Hayashida Tsumugi (Momota Kanako) works at the general affairs division of Shimada Models, a plastic model manufacturer in Shizuoka City. She is in charge of managing working hours. While Tsumugi has no illusions about work and does her tasks perfectly, she enjoys dressing up as her favourite manga characters in her private time. She likes to keep her work and private life separate. One day, Tsumugi is ordered by her CEO Shimada Koichi (Takeda Shinji) to drive the reform of working practices in order to cut down overtime hours and focus on efficiency. However, her senior colleague Mochizuki Sho (Aoyagi Sho), who loves plastic model making and works for the plastic model development division, sees work as his life. He is willing to work overtime and even stay up all night, and he shows up to form a new product development team of all things. And so, the two of them who have very different philosophies on life clash head on.
Official Website: www.nhk.or.jp/shizuoka/drama

This blog contains information and musings on current and upcoming Japanese dramas but is not intended to be comprehensive.
View all posts by jadefrost →
This entry was posted in Fall 2018 Dramas, NHK and tagged Plastic Smile. Bookmark the permalink.