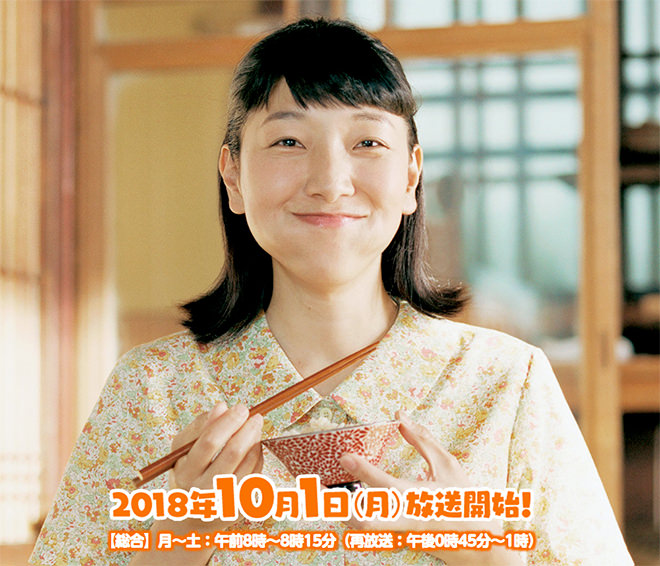 Story
The youngest of three sisters, Imai Fukuko is a born optimist who loves eating. Although she grew up in a poor family in Osaka before the war, she received a lot of love. With the impending marriage of her eldest sister Saki, who had been supporting the family, Fukuko decides to start work as a hotel’s telephone switchboard operator after graduating from a school for girls. She hopes to prepare a special programme for Saki’s wedding ceremony, and hears talk of a new type of magic lantern that can project photographs on a screen one day. Fukuko visits the studio that is developing this magic lantern and meets Tachibana Manpei. She is surprised when he suddenly asks to date. However, he withdraws this just as quickly and she spends her days in confusion. This man will later become her husband and produce a great invention of the century. With the encouragement of Saki’s fiance Onozuka Shinichi, Fukuko who has never given any thought about her future, visits Manpei’s studio to tell him her feelings but military police show up all of a sudden. The two of them eventually get married but Fukuko keeps getting swayed by Manpei who develops businesses with unconventional ideas. At first, she only tolerates this, but she soon supports him and begins to grow into a strong woman. And then, the couple create instant ramen which changes global food culture.

Characters
Ando Sakura as Imai Fukuko
Born in Osaka as the youngest of three sisters, she was raised liberally and received a lot of love although she grew up in a poor family. She is a born optimist and loves eating. Her eldest sister Saki left school to work at a jewellery shop because their father died young. After graduating from a school for girls, she starts working as a hotel telephone switchboard operator to support the family instead of Saki. During this time, an incident leads to an encounter with her future husband Tachibana Manpei. The two of them soon get married, but she keeps getting pushed around by Manpei who develops businesses with unconventional ideas. At first, she only tolerates this, but she eventually supports him and begins to grow into a strong woman.

Hasegawa Hiroki as Tachibana Manpei
A young man who shares a lifetime with Imai Fukuko. His parents died young and he moved from place to place as he grew up. He has been imaginative and energetic from a very young age and sets up a company at 25. An incident leads to an encounter with Fukuko and the two of them get married. He overcomes the devastation of war and develops salt production and nutritional food. He also moves into all sorts of businesses including finance. However, he suffers setbacks each time. He never gives up, even after losing all his fortune. At the age of 47, he tries to establish a new business again. This is a great invention that revolutionises global food culture.

Uchida Yuki as Onozuka Saki
The older sister of Imai Fukuko and Katsuko. She worked at a jewellery shop to support the family in place of their father who died young. When her youngest sister Fukuko found a job, she decided to get married to her fiance Onozuka Shinichi. She is exceptionally kind, has a tendency of putting off her own happiness and making the people around her worry. Although she lives happily with Shinichi after marriage, she becomes ill and ends up confined to bed.

Matsushita Nao as Koda Katsuko
Imai Fukuko’s second sister. She falls in love with an artist Koda Tadahiko and goes against the objections from the people around her to marry him. Although life is not easy, she is blessed with four children and lives a happy life with her husband. Despite her free-spirited nature, she cares about Fukuko as an older sister and becomes a confidant to Fukuko who is troubled by the behaviour of their anxiety-prone mother Suzu. Because she is frank about delicate subjects that Fukuko hesitates to bring up, she often gets into quarrels with Suzu.

Otani Ryohei as Onozuka Shinichi
The fiance of Imai Saki, the eldest daughter of the Imai family. A quiet and calm man who works for a big company. He has endeared himself to Saki’s mother Suzu because he has a steady income. He has a big heart and calmly accepts the uproar that arises in relation to his marriage with Saki. Even Fukuko is thrilled to have a dependable and kind brother-in-law. Although he talks little, he cheers Fukuko up with meaningful words. After the end of the Pacific War, he is sent to the front in foreign land.

Kiritani Kenta as Sera Katsuo
A very ambitious, confident and assertive man who runs his own trading company, Sera Trading. A former technician who made magic lanterns, he is overwhelmed by the remarkable skills and talent of Imai Fukuko’s husband Manpei and turns from producing to selling. He constantly calculates profit and loss. Although he calls Manpei his close friend, they are casual friends. However, when he learns that there is nothing to gain, he simply deserts him. He is shrewd and good at judging situations.

Matsuzaka Keiko as Imai Suzu
The mother of the three Imai sisters. A proud woman whose emotions are like a roller coaster. She prides herself on being a descendant of samurais. Her husband passed away, leaving her behind and raised their daughters with dignity. She is very prone to worrying and will interrupt her daughters’ thoughts and actions conversations. She frequently stands in their way to the extent that she gets teased, “Mum has to worry, or she won’t be able to live.” She ends up living together with Fukuko and Tachibana Manpei because of the war. However, she keeps complaining about Manpei’s businesses which was full of dramatic ups and downs. However, he does not care about her unhappiness and pushes on, so Fukuko have to maneuver between the two of them.

Hashizume Isao as Mitamura Ryozo
The Chairman of the Osaka Chamber of Commerce and Industry, and an important figure in the business world whom everyone respects. He is a caring, good-natured man who is popular with people because he cannot help but feel compassion when he sees someone in need. He becomes acquainted with Imai Fukuko as a result of some incident and gives Tachibana Manpei a hand to help him out of a crisis.

This blog contains information and musings on current and upcoming Japanese dramas but is not intended to be comprehensive.
View all posts by jadefrost →
This entry was posted in Fall 2018 Dramas, NHK and tagged Ando Sakura, Hamano Kenta, Hasegawa Hiroki, Hashizume Isao, Kataoka Ainosuke, Kiritani Kenta, Manpuku, Uchida Yuki. Bookmark the permalink.