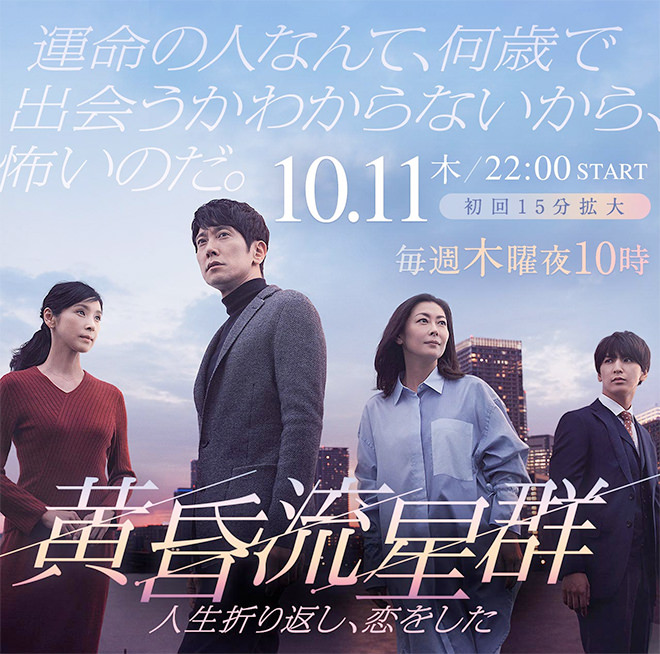 Story
Takizawa Kanji has worked for Wakaba Bank for 28 years. His hard work has paid off and he has become the manager of the Shinjuku branch. He is the most successful among his relatives and classmates. He is sent heated looks by his female subordinates because of his success. However, he does not respond. He has no interest in an affair that will be detrimental to his career advancement. Kanji’s wife Mariko trusts him on this point and has always supported him. He works non-stop and is unable to spend much time with her and their daughter Misaki who is a grown-up. Mariko lives for Misaki. This has been the state of things for more than 20 years and has become routine for the couple. One day, Misaki tells her mother that she wants to introduce her boyfriend Hino Haruki soon. Mariko gets a shock. If her daughter is taken from her, what is left for her and what should she do in the years ahead? Meanwhile, Kanji’s branch wins the best branch award and he wonders whether he will be promoted to headquarters soon. However, the unexpected happens. Kanji is ordered on a secondment to a client company. He learns that he has been given the chop for his involvement in the misconduct of head of the faction. This leaves him in a state of shock and confusion, and makes him question his own life. Kanji happens to see a poster of a snowy mountain and lies to his family that he is going to Switzerland for a business trip the next day. Several days later, he travels to Switzerland alone and arrives in the Swiss Alps. Unfortunately, the weather is bad and Kanji is unable to see the Matterhorn. Even so, he takes the ropeway bound for the mountain. Kanji meets Meguro Shiori, who boarded a gondola thinking she was alone in the middle of a snow storm, and the two of them hit it off. Meanwhile, Mariko suspects that her husband may be having an affair but cannot voice what she thinks. She ends up falling into a forbidden love with Haruki … …

Characters
Sasaki Kuranosuke as Takizawa Kanji
The manager of Wakaba Bank’s Shinjuku branch. He has been devoted to his job ever since he joined the bank and became a branch manager through relentless hard work amid a restructuring of the financial industry. He hardly talks to his wife Mariko lately and he is also not close to his grown-up daughter Misaki. But he readily accepts this way of life. Then one day, he is suddenly ordered on a secondment to a client company for an outrageous reason. He cannot hide his shock at this unexpected demotion and begins to question his own life. Driven to the depths of despair, he questions his own life and is hit by a random thought. He lies that he has a business trip and travels to Switzerland alone. He meets a Japanese woman, Meguro Shiori, who is also on a solo trip, and they get along very well but … …

Nakayama Miho as Takizawa Mariko
Takizawa Kanji’s wife. A full-time housewife who has devotedly supported her husband and lovingly raised their only daughter Misaki. She feels a sense of loss that her daughter is leaving the nest. She is shocked that Kanji was silent about his demotion and suspects that he may be having an affair even though she is unable to voice her thoughts. She meets her daughter’s fiance Hino Haruki and finds herself drawn to Haruki who soothes the void in her heart.

Fujii Ryusei as Hino Haruki
A lawyer who is engaged to Takizawa Kanji’s only daughter Misaki. However, there actually is a secret about this wedding. One day, he comes to the Takizawa residence to visit Misaki and meets her mother Mariko who pricked her finger on a rose thorn in the garden. He initially treats her as Misaki’s mother but listens with sincerity, and as they become friendly, he realises that he is drawn to her … …

Ishikawa Ren as Takizawa Misaki
The only daughter of Takizawa Kanji and Mariko. She works for a major trading company. The sensible type who has never done anything to worry her parents. Although she opposes her father who does not care very much about the family, she is close to her mother Mariko. She actually has a huge secret that eventually sends big shock waves through the family.

Aso Yumi as Hino Sae
Hino Haruki’s mother. As the head of the distinguished Hino family, she has protected its reputation. She personally comes from a good family. She prides herself for continuing to teach piano classes and putting her son all the way through graduate school after her husband passed away. Because of her strong pride, she scrutinises the character of her son’s bride-to-be, Takizawa Misaki, as well as Misaki’s parents.

Kuroki Hitomi as Meguro Shiori
An elegant and intelligent woman. She has actually been caring for her parent(s) at the expense of her own life, and encounters Takizawa Kanji at the moment when she is reconsidering her life of loneliness. As she converses with him, she finds herself drawn to his personality. She is reunited with Kanji, whom she thought she would never meet again after their return to Japan, at an unexpected place.

This blog contains information and musings on current and upcoming Japanese dramas but is not intended to be comprehensive.
View all posts by jadefrost →
This entry was posted in Fall 2018 Dramas, Fuji TV and tagged Kuroki Hitomi, Nakayama Miho, Sasaki Kuranosuke, Tasogare Ryuuseigun. Bookmark the permalink.