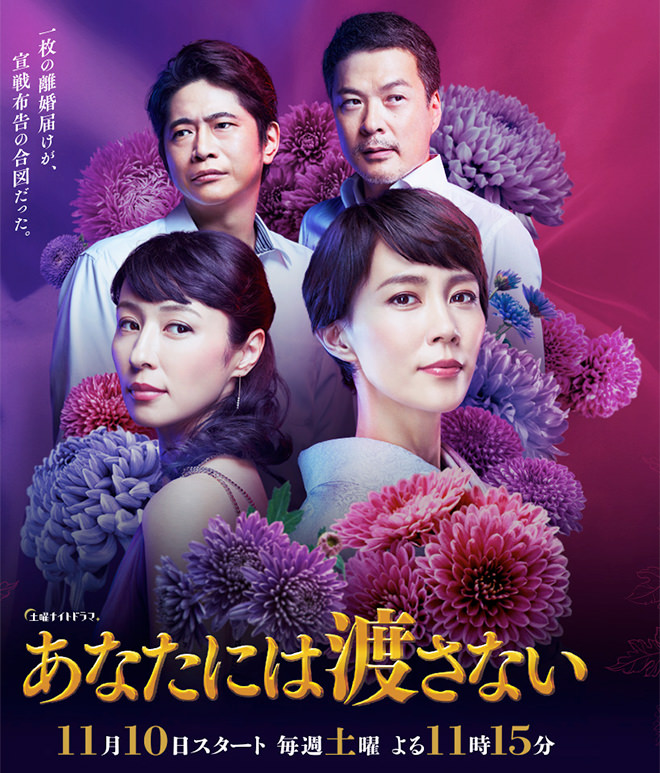 Story
Kamishima Michiko has been married to Shunpei for 20 years and they have two teenage children Kazuki and Yumi. He is the son and chef of a distinguished family which runs the famous traditional Japanese restaurant Hanazumi. However, Michiko is not involved in Hanazumi’s operations and has never set foot in there ever since she paid a visit before her marriage. She leads a peaceful life as a full-time housewife. But one day, she is told by Shunpei to pick up the CEO of a sake brewery in Kanazawa at Tokyo station. Michiko expects a man. But Yahagi Tae, a woman dressed in a kimono, shows up. Tae invites Michiko to the lounge at the hotel where she is staying and suddenly starts reminiscing about Michiko’s late mother-in-law. Michiko is bewildered by Tae who chats happily about a side to her mother-in-law that was unknown to her. Identifying herself as Shunpei’s lover, Tae triumphantly tells Michiko, “I’ve come to get your husband”. Tae says they have been in a relationship since six years ago. She presents divorce papers that Shunpei has signed to Michiko and reveals that Michiko’s late mother-in-law had welcomed their relationship. Furthermore, Michiko discovers that her husband’s restaurant is heavily in debt and on the brink of bankruptcy. Confronted with a series of unexpected truths, Michiko has Tae buy out her marriage papers with Shunpei for 60 million yen and decides that she will become the proprietress of Hanazumi and put it back on track.

Characters
Kimura Yoshino as Kamishima Michiko
The wife of Kamishima Shunpei, the chef of the famous traditional Japanese restaurant Hanazumi. She fell in love with Shunpei at first sight at an arranged introduction and has been a full-time housewife for 20 years. However, one year after her mother-in-law’s death, a woman called Yahagi Tae shows up all of a sudden and tells her about her affair with her husband. She is forced to divorce him. Despite the difficult situation, she moves on with life with determination and positivity, and decides to become the proprietress of Hanazumi. She wrests 60 million yen from Tae as funds for a new Hanazumi and has to face numerous difficulties and troubles.

Mizuno Miki as Yahagi Tae
The female CEO of a sake brewery in Kanazawa. She is a business connection of Kamishima Shunpei’s restaurant. They were drawn to each other when he came to the brewery six years ago and have been carrying on an affair. After his mother’s death, she challenges Kamishima Michiko for Shunpei by pressing for their divorce. She raises 60 million yen overnight through some method and loans it to Michiko. She squares off against her not merely to fight for a man.

Tanaka Tetsushi as Kasai Shintaro
The CEO of a mid-sized construction company. Kamishima Michiko’s childhood friend and had been secretly in love with her back then. His feelings are rekindled after he happens to meet Michiko again. Although he is unable to be honest with her about his feelings because of his personality, he supports her at every opportunity.

Hagiwara Masato as Kamishima Shunpei
Kamishima Michiko’s husband. He followed his father’s footsteps and is the chef of the famous traditional Japanese restaurant Hanazumi. After his father passed away, he single-mindedly honed his skills under his mother who was the proprietress. But after her death, Hanazumi falls on hard times. He is saddled with a large amount of debt and unable to turn the restaurant around. This triggers his divorce with Michiko in order to protect the family. He runs to his lover Yahagi Tae but anguishes over the difficulty of letting go of his wife.

This blog contains information and musings on current and upcoming Japanese dramas but is not intended to be comprehensive.
View all posts by jadefrost →
This entry was posted in Fall 2018 Dramas, TV Asahi and tagged Anata ni wa Watasanai, Kimura Yoshino, Mizuno Miki, Takana Tetsushi. Bookmark the permalink.